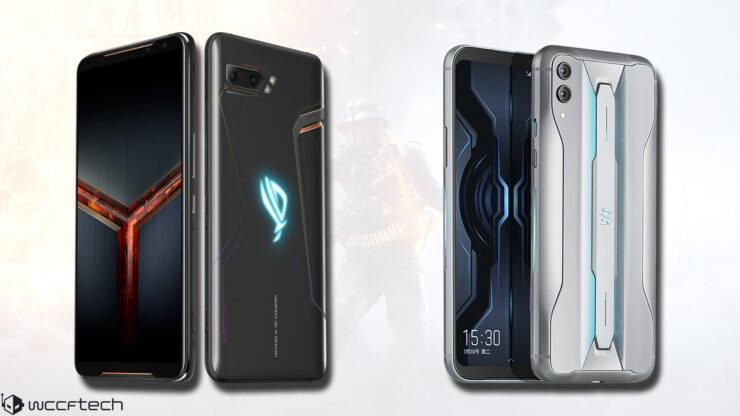 With both the ASUS ROG Phone II and Xiaomi Black Shark 2 Pro officially here, these gaming smartphones present the very best in lightning-fast Android hardware, while also surprisingly getting stamped with a ‘not so ridiculous’ price tags like the rest of the competition incorporated with the best internals available in the market.

However, no two devices can be the same, even if the ROG Phone II and Black Shark 2 Pro are underpinned by Qualcomm’s fastest SoC to date, the Snapdragon 855 Plus. There are a lot more differences separating the two portable gaming behemoths apart, and a few similarities, as you’ll find out. Here’s an in-depth look at the ROG Phone II and Black Shark 2 Pro in terms of their comparison, and if you’re in the market for a device that delivers the very best in performance, you’ll know which one to pick and checking out all this data.

Don’t be surprised if this specifications and features comparison showcases more than a few similarities. For one thing, both the ROG Phone II and Black Shark 2 Pro are devices embedded with that gamer DNA, meaning that even from a distance, users will immediately glance towards it and recognize it as a gaming smartphone. Thanks to the advanced cooling system, large batteries, and premium construction, both devices are heavy.

The ROG Phone II weighs 240 grams, while the Black Shark 2 Pro will be slightly easier on your muscles as it weighs 205 grams. Another reason for the addition in weight is thanks to the glass back on the ROG Phone II, while the Black Shark 2 Pro features an aluminum chassis at the rear. Now that the weight part has been taken care of, let us compare the other specifications of both phones and see what makes them so special. 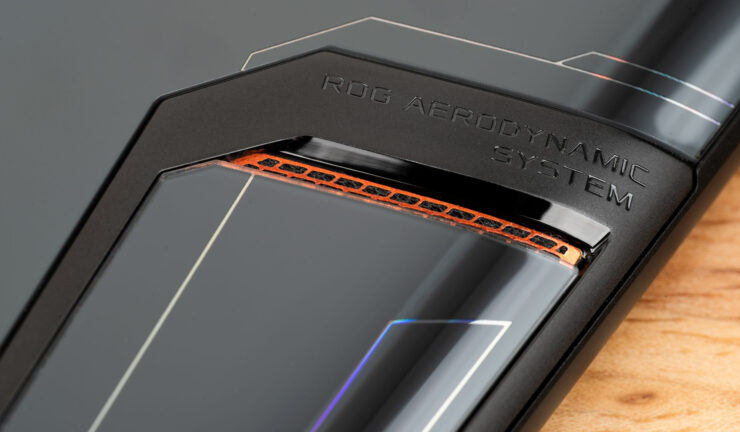 The ROG Phone II has a slightly bigger 6.59-inch AMOLED screen compared to the 6.39-inch screen AMOLED panel belonging to its closest competitor. Not surprisingly, both manufacturers have incorporated a 120Hz refresh rate display, with a 240Hz touch sample rate. Both handsets also feature the same 2340 x 1080 resolution. The differences appear in display response time, where the Black Shark 2 Pro appears to have the upper hand.

The company states that its flagship has a 34.7 millisecond response time, making it faster than the 49ms touch latency of the ROG Phone II. However, ASUS’ gaming flagship will be excellent for media consumption as its screen supports 108 percent of the DCI-P3 color space and is also HDR10 compliant. The Black Shark 2 Pro’s panel doesn’t support HDR 10 and covers 100 percent of the DCI-P3 color space.

Both devices have a Snapdragon 855 Plus, making them equal in terms of performance and efficiency. The differences show up in the internal memory and RAM departments. The Tencent model that’s exclusive to the Chinese market offers 8GB of LPDDR4X RAM and 128GB of UFS 3.0 storage, while the top-tier version touts a whopping 12GB RAM and 512GB of onboard memory.

With the Black Shark 2 Pro, Xiaomi didn’t compromise on the RAM front, with both the base model and fully-decked-out variant offering 12GB RAM. The cheaper version features 128GB of storage, and if you want more onboard memory, there’s a 256GB model too. Sadly, none of these gaming smartphones offer expandable storage, but with this much memory, some users might think it’s pointless to invest in a microSD card. 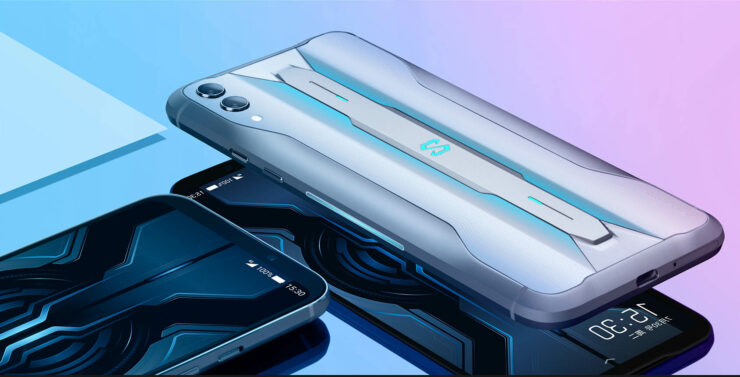 This is where the ROG Phone II has a wide advantage over its closest rival. ASUS’ crown jewel houses a massive 6000mAh battery, with the company claiming that you can game up to 7.1 hours playing PUBG. The Black Shark 2 Pro, in comparison, offers a much smaller 4000mAh cell, and while Xiaomi didn’t state how many hours you can play PUBG before having to plug in the device once more, the capacity differences show the ROG Phone II will win comfortably in a battery endurance test.

In case you’re wondering, none of these two support Qi wireless charging, but they do get fast-charging. Given their massive batteries, it would be a foolish decision if none of these phones offered rapid charging. The ROG Phone II supports up to 30W of power, while the Black Shark 2 Pro tops up at 27W. The advantage of owning the ROG Phone II is it can charge other devices too, like a powerbank, but we believe it’s very rare you’ll ever encounter the need to charge other phones or accessories this way.

Both smartphones feature a 48MP primary RGB sensor, which we presume is Sony’s Exmor IMX586 unit. The ROG Phone II has a secondary 13MP ultrawide camera, while the Black Shark 2 Pro features a 12MP telephoto lens with 2x optical zoom. Both devices support 4K video recording up to 60FPS with the primary shooter, along with extras such as slow-mo video recording, with the differences in frame rate and resolutions provided below.

Expect image processing to be handled differently on both handsets, and your acceptance of the camera quality will vary greatly on both smartphones. At the front, the ROG Phone II houses a 24MP selfie camera with 1080p video recording support up to 30FPS. The Black Shark 2 Pro has a 20MP unit that supports the same video recording resolution and frame rate.

The ROG Phone II has a 3.5mm headphone jack, while the Black Shark 2 Pro ships without one, which is disappointing, considering the latter is targeted towards mobile gamers who will definitely want to hook up their premium headphones without a dongle. Both also have stereo speakers for users that want stellar audio quality while consuming media or playing Android-based games.

The one area where users will appreciate ASUS a lot is in the software. The original ROG Phone shipped with a lot of fluff in the form of unnecessary software and bloatware. To remedy this, ASUS gives you the option to run its custom ROG UI or stock Android. With the Black Shark 2 Pro, the UI is nearly stock Android, so it’s a decent choice too.

Both devices also sport an in-screen fingerprint reader, and we reckon that their unlocking speeds will vary depending on software optimizations. The ROG Phone II has a fast Type-C USB 3.1 port, while the Black Shark 2 Pro utilizes the USB 2.0 standard. Expect data transfers on ASUS’ gaming smartphone to be significantly faster. Also, what’s a fast, portable gaming device with all that hardware and an inefficient cooling system? Thankfully, the ROG Phone II is equipped with a vapor chamber, along with vents at the back to effectively dissipate that heat.

The Black Shark 2 Pro features the company’s third iteration of a ‘liquid cooling’ system to keep those temperatures in check. To reduce thermals by an additional 5 degrees Celcius, ASUS provides a snap-on AeroActive Cooler II fan that attaches at the back of the ROG Phone II, which is a thoughtful approach from the Taiwanese manufacturer.

The Tencent model of the ROG Phone II features 8GB RAM and 128GB of storage and is priced at 3499 Yuan, or $504 USD, while the 12GB RAM/512GB storage variant is more expensive, coming in at 5999 Yuan, or $864 USD. The Black Shark 2 Pro is much more affordable in comparison, with the 12GB RAM/128GB model priced at 2999 Yuan, or $432 USD. Upgrading your storage means you’ll have to pay 3499 Yuan, or approximately $504 USD for the 256GB storage variant. If you want to check out the primary differences between the two devices, you can view the table below at your convenience. 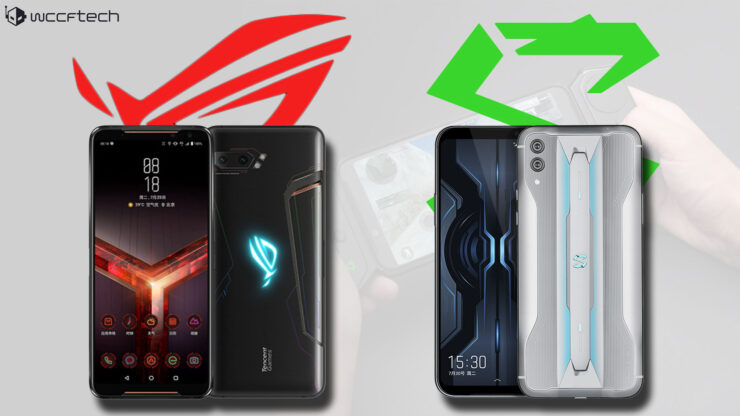 Regardless of which device you’re leaning towards, both the ROG Phone II and Black Shark 2 Pro represent the very best of what a 2019 gaming smartphone has to offer. They are fueled with the very best internal specifications, and those internals would put a company like OnePlus to shame, a phone maker that always decks out its devices with the best-in-class hardware for an Android device. Obviously, if pricing is a grave concern for you, the Black Shark 2 Pro purchase makes a lot of sense, and that’s the choice we would go for too.

However, the ROG Phone II’s 12GB RAM version isn’t as expensive as we thought it would before those pricing details started flowing through. However, splurging $900 on a device doesn’t make a lot of sense for a lot of customers, and that’s alright too. That’s why we have companies like Xiaomi, who have targeted the lower-priced segments, offering offer eye-boggling value for your hard-earned money. While a $500 smartphone isn’t exactly cheap in our eyes, it’s also what you’re getting for that cash.

Which model do you think is worth choosing over the other? Tell us down in the comments and participate in the poll if you wish.

ASUS ROG Phone II Is a Beast in the Hardware Department, but Its Camera Doesn’t Inspire Confidence, Says DxOMark’s Review