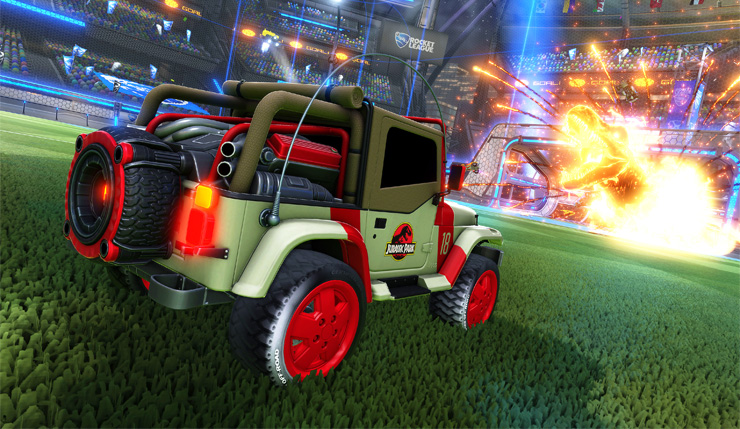 Rocket League has, uh, found a way to combine car soccer with dinosaurs. That’s right, the game is getting a Jurassic World Car Pack, which includes the series’ iconic Jeep Wranglers, a T-Rex goal explosion, and more stuff that ought to get 90s kids all a-tingle. Check out a trailer, below.

We’ve teamed up Universal once again to bring one of the greatest movie franchises of all time to Rocket League! The Jeep Wrangler, featuring both Jurassic World and Jurassic Park Decals, depending on which team you’re on in a match, is sure to please both old and new Jurassic Park fans alike. The Jeep Wrangler also comes with its own unique Wheels and Engine Audio, making your gas-powered Jeep a spitting image of the cars in the films. Want to get into the Tyrannosaurus spirit with other Battle-Cars? Life finds a way and so too does the ‘T.Rex’ Goal Explosion that's sure to give Dr. Ian Malcolm some uncomfortable flashbacks. A new themed Topper, three Player Banners, and three Antennas are in there too.

There should be a new ball filled with annoying kids based on Jurassic World’s gyrospheres, but, otherwise, this is a pretty good selection of goodies. And don’t worry, you won’t have to spare no expense to get them – the Jurassic World Car Pack will only set you back 2 bucks. Anybody going to grab this DLC? I’ll admit, I’m tempted! I mean, it includes a banner featuring Mr. DNA. How can I say no to that?

Rocket League is available on PC, Mac, Linux, Xbox One, PS4, and Nintendo Switch, and the Jurassic World Car Pack will be released on June 18. That means it will be out in time for Jurassic World: Fallen Kingdom, which hits theaters on June 22.