Here’s a fun fact. I didn’t know much about the Arthurian tales until my interest got piqued by Sonic and the Black Knight. I know, it’s a dumb way to find out about King Arthur’s adventures. I bring this up because this very interest came back as soon as I read about King Arthur: Knight’s Tale.

My expectations were already way too high when the game came close to the release date. But then I started to see some things that made me feel mixed before jumping in. For one, this is a Kickstarter-backed project. While not every game like this is bad on its own, they also tend to be middling experiences barring a few exceptions like Shovel Knight and Bloodstained, of course.

Secondly, the game would bring roguelike elements, and I immediately felt that sense of dread coming up. While I personally don’t think that roguelikes are that bad, I’ve played so many of them that the formula has become too repetitive for me and it almost felt like the developers just wanted to justify bringing randomly generated environments.

So, I waited with excited (yet cautious) anticipation for the release of King Arthur: Knight’s Tale and Neocore gave me the opportunity to play it. Will this game be like Chernobylite, where I was pleasantly surprised and my expectations subverted, or will my fears be justified? Let’s find out.

I’m going to start by saying that this kind of game was a long time coming. The tale of King Arthur and the Knights of the Round Table is one of the most interesting reads when you begin to study its intricacies. Seeing an alternate history in which Sir Mordred is tasked with killing King Arthur and fighting alongside the Knights and even the very people that fell by his sword is fascinating.

I should probably have opened with that. The game is basically a retelling of the Arthurian tale's ending. Or at least the part where Arthur died. In this game, you get to play as his former nemesis Sir Mordred and go on a quest to find out what exactly happened with him and the Lady of the Lake as the world was plunged into a war with many fantastical creatures.

You see, after King Arthur and Sir Mordred struck each other down, the once virtuous King moved to the land of Avalon. This place where fallen knights are laid to rest saw an unorthodox event happening. Arthur became a demonic and despot knight, bringing corruption to Britannia and the return of darkness and paganism to the world.

These events led the Lady of the Lake to bring back the knight that once felled King Arthur to end this new realm of darkness. Sir Mordred is thus brought back from the dead, tasked to take his sword and fight against his fated rival once again, only this time, it's to save the world from him.

King Arthur: Knight’s Tale is a strategy RPG with roguelike elements that you can tailor to your playstyle or simply turn off. The game allows you to take control of a party of 4 characters (5 if you count guest characters who can join you during missions) to take on several tactical scenarios that involve strategic usage of actions and timing.

When you traverse through the map in this game, you might as well be tricked into thinking you’re playing a Diablo game. Why? Because the game’s traversal is pretty much like that dungeon crawler. Of course, once you get into battle, the game transitions into a grid-based strategy fare in which you have to take down several enemies.

As expected of games like this, you are limited in how many actions you can perform or how far you can move via Action Points (AP). It’s not just a matter of moving close to the enemy, it’s also a matter of learning how to save up AP to be able to even do anything once you finally get close to said enemy that isn’t standing around like a dope.

Some specific combat scenarios allow you to prepare for the fight by letting you arrange units pre-battle. However, the way you enter battle is left to the Formation your party is currently in on most occasions. As such, it’s always best to make sure the right party members are located in the front or at the back because the game is not going to pull its punches when it comes to how fierce enemies can be.

Sure, once you get the hang of it, it’s pretty easy to take down the enemy party without a scratch. But if you don’t pay attention to your surroundings or fail to take into account some other enemies, it can be the difference between coming out of the battle unscathed or losing your beloved party members.

Adding to this is the positioning you have. Yes, it’s not just about making sure you’re not just standing there and taking arrows directly to your face but also about making sure your back isn’t turned toward the bad guys. Getting flanked is one of the worst things that can happen to you because backstabs and blindspot hits can earn you even more damage.

The way this RPG works with its health system is that you have three separate gauges that influence how much damage you take. The Armor allows you to tank hits without suffering too much HP damage, and HP is essentially a second life bar that protects your Vitality. Armor and HP are recoverable resources. However, Vitality is where the critical moments of the game’s combat reside in.

If you lose Armor and HP, it leaves your Vitality open. You will start praying the enemies don’t hit your party member when that happens. That's because, unlike the aforementioned two, Vitality doesn’t regenerate at all. In fact, not even after missions are done will Vitality regenerate. If you get damaged when you only have your Vitality gauge left, you also have the possibility of suffering an injury, which is a permanent debuff that can only be cleansed under specific conditions.

This is where King Arthur: Knight’s Tale becomes a game that makes you take every single encounter seriously. You’re going to face tons of enemies who will not hesitate to put you and your party down. They will take any advantage to the point where even moving close to them can get you hit by an Opportunity Attack.

Of course, that doesn’t mean this game is too hard. Like I said before, it’s just a matter of getting the hang of it. While enemies can be powerful, you can also stack the deck in your favor with the units you recruit. Some of the ranged fighters in this game are downright broken with the debuffs they can provide, like Poison, Freeze, or even flaming floors.

While playing King Arthur: Knight’s Tale, I noticed that this game loves ranged fighters more than your bruisers and rogues. While plenty of units can definitely bring the thunder when it comes to close-quarters combat, they take a while to get there while the ranged fighters are doing most of the job anyway. I guess the developers saw this, too, because some of the abilities that CQ heroes have access to in later skill tiers are ranged.

Sir Mordred is ironically my favorite character to play because, as a well-rounded fighter, he can keep on the offensive before the ranged fighters even get a turn. However, you can also make your party members pretty resilient with the accessories and armor you give them. This game’s lovely when it comes to rewarding explorers who venture into the vast unknown and do sidequests.

I should also mention the game’s Morality system. While Sir Mordred has a set mission: Kill King Arthur. The way he tackles it depends entirely on the player’s choices. Are you going to become a righteous knight that is concerned with the well-being of Camelot and the entirety of Britannia? Or are you going to become a Tyrant that only sees Arthur as an obstacle on their path to conquer this land?

The choices you make throughout King Arthur: Knight’s Tale, from when you help characters in sidequests or decide the fate of people who help or double-cross you, are important as they will also unlock quests for other characters and even abilities to further progress your reconstruction of Camelot and the Round Table.

Of course, since I am the Righteous type, my decisions often were made in an attempt to help restore the kingdom in a more diplomatic way. The rewards I got from choosing this path were pretty nifty as well, especially in the mid-game where the kind of party members you bring is more important.

That said, this game is going to take you a couple of sittings. Just clearing the first part of the game took me a good 10 hours. Granted, it was easy for me to get lost in the narrative because the characters were so goddamned good at keeping me hooked to their stories.

See, as with any other RPG, you’re going to have the usual archetypes that come with it. You have mages, tanks, assassins, etc. These archetypes are shared between 30 different characters, all of which had significant roles within the Arthurian tale. That’s the key part, of course. You’re going to see the aftermath of Mordred and Arthur’s fight, and you will see characters developing over time.

The number of characters you can bring to quests is staggering for just a party of 4. But more often than not, you’ll find yourself listening to the stories they have to tell. It’s been a while since I had an RPG where every single character roped me in and made me want to keep them (unfortunately, I had to banish some as they weren’t doing much for me in combat and I have limited slots even with a max upgrade Camelot).

If you get bored after the nearly 60 hours of RPG content that the game offers, you can also try taking on other opponents through King Arthur: Knight’s Tale’s multiplayer features. In them, you’ll be able to face off against other strategists in 4v4 fights across various gameplay modes. The scenarios that you’re allowed to fight in are pretty much the same you’ll find yourself in the main campaign alongside a few new ones.

Of course, if you want to add even more of a challenge, you can always try the game’s fabled Roguelike mode. This mode essentially adds permadeath to yourself, meaning that your quest may come to an abrupt end as you fight. Of course, if choices mattered a lot back when I played on Normal mode, you can imagine how complicated things can get when the game’s roguelike mode is on.

If my description of the thing isn’t enough, then I should just be blunt. King Arthur: Knight’s Tale is one of the most unique and wonderful experiences I had for a combination of genres I don’t like so much. The Strategy RPG formula is way too slow for me, the dumb idiot who wants to see big numbers and explosions in ARPG or TRPG settings. However, this game managed to hook me with its somber atmosphere, incredible music, and magnificent characterization of the iconic figures that were present in the Arthurian Tale.

I recommend this game to any SRPG enthusiasts. Despite some graphical and optimization issues, this game is still being constantly updated by Neocore, and I honestly believe that it is looking toward a bright future. 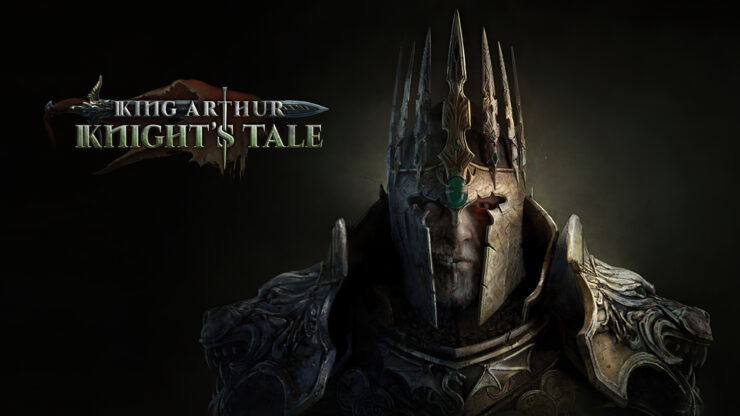 Despite a few shortcomings, King Arthur: Knight's Tale is one of the best strategy RPGs I've played. While the SRPG aspects are pretty great, this alternate take on the Arthurian Tale can keep you engaged with its characters and stories.