With the GPU & Ray-tracing out of the way, it's time to look at some of the main features of the RDNA 2 architecture itself which it has to offer to gamers. There are several features to discuss here so let's start with the general enhancements that AMD has incorporated within its 2nd Gen RDNA 2 architecture.

AMD Smart Access Memory is a new feature introduced with the Radeon RX 6000 Series graphics cards that enable more memory space to be mapped to the base address register resulting in performance gains across select games. 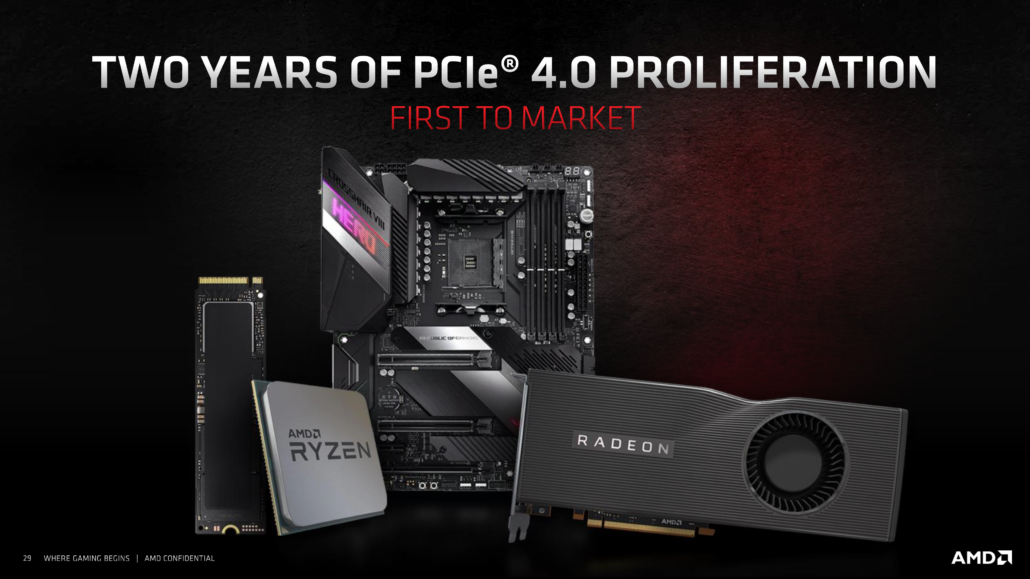 ln conventional Windows-based PC systems, processors can only access a fraction of graphics memory (VRAM) at once, limiting system performance. A core aspect of PCI Express technology, the Base Address Register (BAR) defines how much discrete GPU memory space is to be mapped. ln today's PCs, processors only access a fraction of GPU memory, typically limited to 256 MB of mapped memory. With less efficient data transfer, performance is restricted.

With AMD Smart Access Memory, PCIe bandwidth is utilized to expand the data channel to fully harness the memory - removing the bottleneck to increasing performance. On paper, the SAM allows up an average of 6% improvement in performance and up to 11% gains in titles that make use of higher resolution textures.

As for enablement of the feature, AMD has officially only allowed support for SAM on its Ryzen 5000 series platform with supported AMD X570 and B550 motherboards. The feature can be enabled through BIOS of each respective motherboard that supports the feature. Currently, there are only a handful of motherboards that support it but board vendors have assured that more models would be added soon.

AMD's FiedilityFX n open-source developer toolkit is available on GPUOpen that makes it easier for developers to implement high-quality effects and optimizations that make games look beautiful while offering the best balance of visual fidelity and performance.

For the launch of Radeon RX 6800 Series graphics cards, two new FidelityFX effects have been announced: Variable Shading and Denoiser. These effects are already integrated into upcoming games such as Dirt 5 and The Riftbreaker and will be made freely available for developers on GPUOpen.com soon.

Here is some more detailed information about each of the AMD FidelityFX effects.

Combined Adaptive Compute Ambient Occlusion (CACAO) dynamically and efficiently helps improve the appearance of objects based on their exposure to ambient light.

Denoising optimized for AMO RDNA and RDNA 2 architectures to help improve the visual quality of real-time raytracing and other in-game effects.

In addition to these, AMD has also promised that their FiedilityFX Super Resolution technology is currently in development. They are currently trying to get as many developers to work with them for the incorporation of the feature in their engines and games.

Input lag is the time between when a gamer provides an input-the click of a button or flick of a mouse-and when the computer shows an appropriate response on the screen. Because it affects the responsiveness of a game, input lag, or latency, can have a major impact on the overall quality of the gaming experience. As you may know, if you have ever run into lag issues, gaming with lots of lag can feel clumsy, disconnected, and unsatisfying. Meanwhile, a good low-latency setup can make gaming feel more immediate, gratifying, and fun.

Frame rate is one of the primary factors in determining the amount of input lag in PC gaming. Typically, frame rate and latency are inversely related: the higher the frame rate, the lower the input lag. That's one of the reasons people find certain frame rates acceptable for gaming and others too slow -and it's also the reason why competitive gamers and eSports athletes tend to reduce in-game image quality and resolution. By configuring their systems for higher frame rates, they're optimizing for lower latency-and quickness is king in competitive gaming.

However, raising the frame rate isn't the only way to reduce input lag. The AMD Radeon Anti-Lag feature in AMD Radeon Software Adrenalin 2020 Edition can reduce lag at a given frame rate by means of a targeted software-optimization. Here is an example of the latency reductions you can expect from Radeon Anti-Lag when playing at 4K and max quality settings on a Radeon RX 6800 XT.

Radeon Boost is designed to provide a faster, more fluid, and more responsive gaming experience in supported games. Radeon Boost works by watching for specific sorts of user inputs-when a gamer moves a mouse or presses a control stick-that trigger on-screen camera rotation. When such movement happens, Radeon Boost responds by instantly and dynamically scaling back the rendering resolution in order to improve the frame rate.

As soon as the motion ends, Boost scales the resolution back up. Due to limits in both display technology and human perception, you may not notice the reduction in detail at all-but you're likely to appreciate the improved feel and responsiveness of gameplay with Boost enabled.

Radeon Boost also includes Radeon Anti-Lag technology as part of its operation. Thanks to the higher frame rates offered by Boost dynamic resolution, Boost can reduce input lag even further than Radeon Anti-Lag alone. Now, with support for even more titles, the best way to appreciate the impact of Radeon Boost is to try it for yourself.

One of the most talked-about overclocking features is AMD's RAGE mode and AMD has stated that they purposely left overclocking headroom in their RX 6000 series cards for users to mess around with. 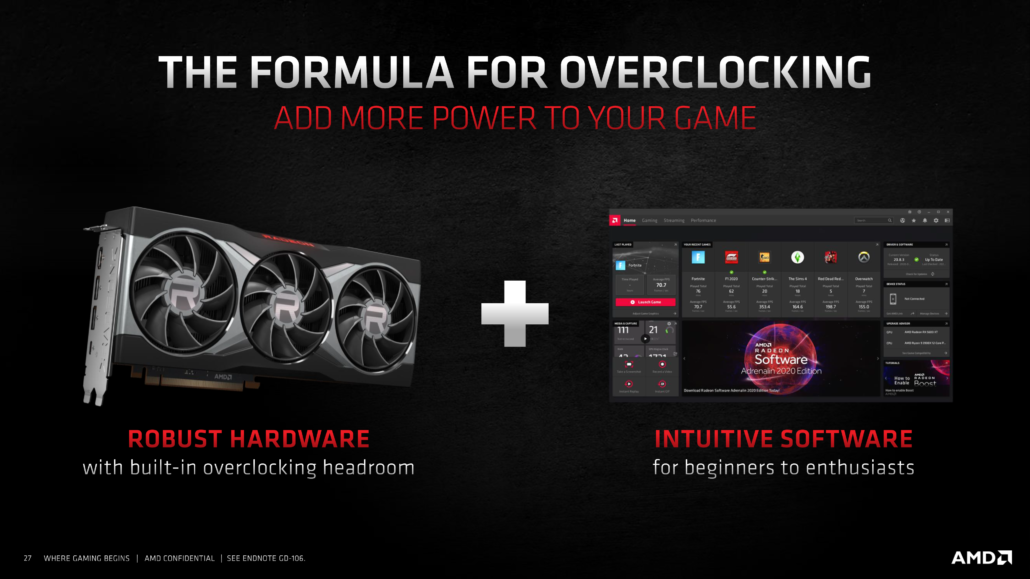 For this sole purpose, AMD has three overclocking modes available within its Radeon Software app. Unlike what you might've heard before, Rage mode is purely an overclock preset with a pre-defined TGP and fan speed. AMD says that enabling Rage-mode doesn't void warranty and is only available for Radeon RX 6900 XT and Radeon RX 6800 XT graphics cards. Rage mode allows for up to 2.3 GHz boost clock on the aforementioned cards. 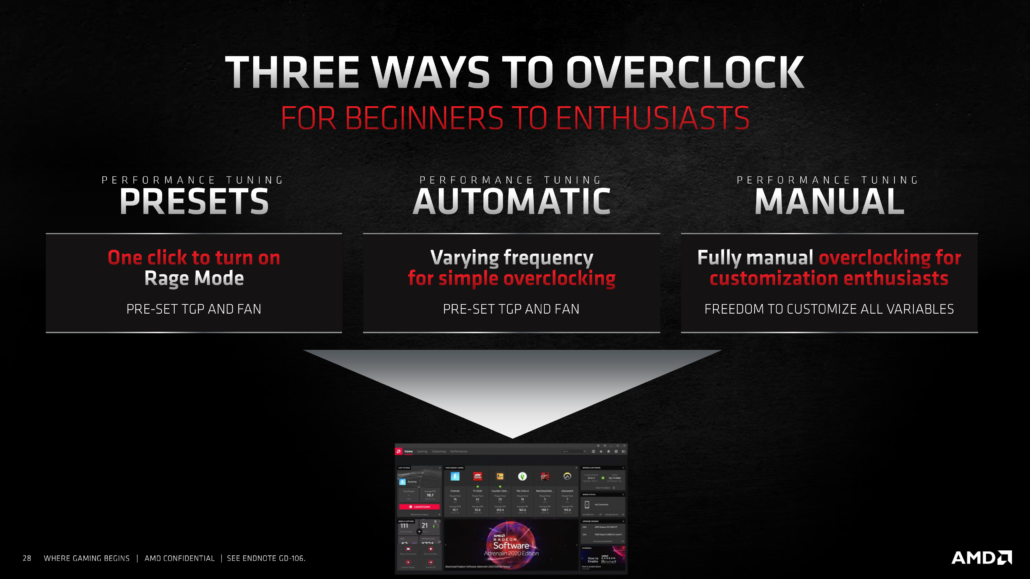 There's also the standard automatic performance tuning preset which lets you select a variable frequency with a pre-defined TGP and fan profile. Then lastly, there's the manual preset which lets you customize all variables (clocks, TGP, fan speeds, voltages) to your choice but do be warned as overclocking your card with these two modes will definitely void your warranty as AMD mentions.