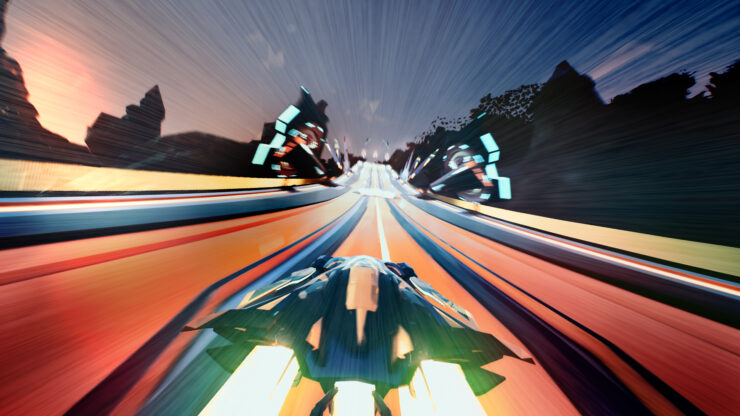 With its 100K+ owners (according to SteamSpy), Redout is perhaps the most successful in a bunch of anti-gravity racing games released recently by indie developers. Developed by Italian studio 34BigThings, the game just launched on PlayStation 4 and Xbox One with the LightSpeed Edition (you can find more technical information on the console ports in our previous story).

We contacted Valerio Di Donato, CEO at 34BigThings, to learn more about the studio's plans.

How many developers do you currently have? Do you plan to hire more in the future?

We are about 30 people in the studio right now. We grew quite rapidly from 3 (the original founders) to this number and we are finally slowing down. That doesn't mean we are not hiring, we are *always* improving our team increasing seniority and looking for the most talented good people out there. I think we'll add another couple of units to that number in the coming months if we find the right match.

What's next for 34BigThings? More content for Redout or perhaps a full blown sequel?

Well, more content is always good for the players and us. I think we have some good surprises for everyone and more is coming now that we are getting closer to release the console versions. I would love to talk about a sequel at the moment, but it's really early for that.

What do you think of the state of the industry in Italy? There are many small developers appearing on the scene.

I think it's finally coming into being. Just consider the number of professionals working in the industry doubled during the last year. We can see that the basics of game development are nowadays a given in our industry, which might sound "too basic", but for us, it's a good achievement. There's still a lot of confusion between the definitions of game, product and "whole product" but the fundamental knowledge related to the marketing and business operations is finally spreading in our industry.

For those who haven't tried the game yet, what makes Redout stand out within its genre?

I would say a series of interesting choices, quoting one of the fathers of game development, Sid Meier. First of all, we are true to our core: we ought to make the fastest game ever made and that's what we delivered. And our community appreciated the direction and the execution. Keeping up what we poured into Redout other than the last three years of our lives, what we are and what we have become in that time, we wanted to create a challenge. Redout is not an easy game and it screams "hardcore" from the first time you pick up your controller to when your eyes start to bleed because of the Redout effect.

For years, this genre seemed forgotten. Now, though, we have a renaissance of sorts with Redout, Fast Racing Neo/RMX, Wipeout: Omega Collection, Formula Fusion and GRIP. Why do you think this happened?

Well, I think it was time for the genre to come up to its glory again and the only way that's possible is via good games and well-marketed products.

The game has been available for a while on PC via Steam, though it is only compatible with Windows. Do you plan to add support for Mac and/or Linux?

Not right now. The Linux community is pretty strong and there's a lot of interest in Redout, but supporting a wide platform as Linux requires some serious testing and QA that we simply cannot afford right now. The main problem for OSX are performances instead, but we are optimising a lot for consoles now and we might reconsider in the future.

We know you're also working to release the game on the Nintendo Switch. What do you think of the platform and are you going to support any of its unique features? Also, what kind of technical compromises did you have to make for this port?

I personally love the Switch and what Nintendo is trying to achieve. For me, it is a lot more about the overall direction than the console itself, as that's temporary. It's a revolutionary console, but I don't think players will use it as Nintendo intended, and that's a good thing. I love the Switch because it will afford emergent and subversive gameplay in the real world, directly on the hardware. That being said, it's a mobile console with a solid mobile GPU and that's how developers should approach the porting and the optimisation challenges.

Will there be cross-play functionality between any of the platforms?

Unfortunately not. Maybe Redout 2, who knows!