The launch of a new console is a great time for smaller developers and publishers. Rush to meet the launch date with a new game, and you’ll inevitably sell copies – it doesn’t even matter if the game is any good, honestly, people need games to play on their new system. So I’m sure everyone that bought Fast RMX on launch day was pleasantly surprised – this is no mediocre release published solely to soak up cash from those who can’t help themselves, Fast RMX is the kind of racer we may be talking about until the death of the Switch console.

On sight, it’s obvious what Fast RMX is; a futuristic racer in the vein of F-Zero and Wipeout, with a color swap mechanic that asks you to pay attention, or lose the race. If that all sounds familiar to you, you just may have played Fast Racing NEO on Wii U. Yes, anyone new to the Switch might be unaware, but Fast RMX is, in fact, closer to a re-release or a complete edition as opposed to a new game. 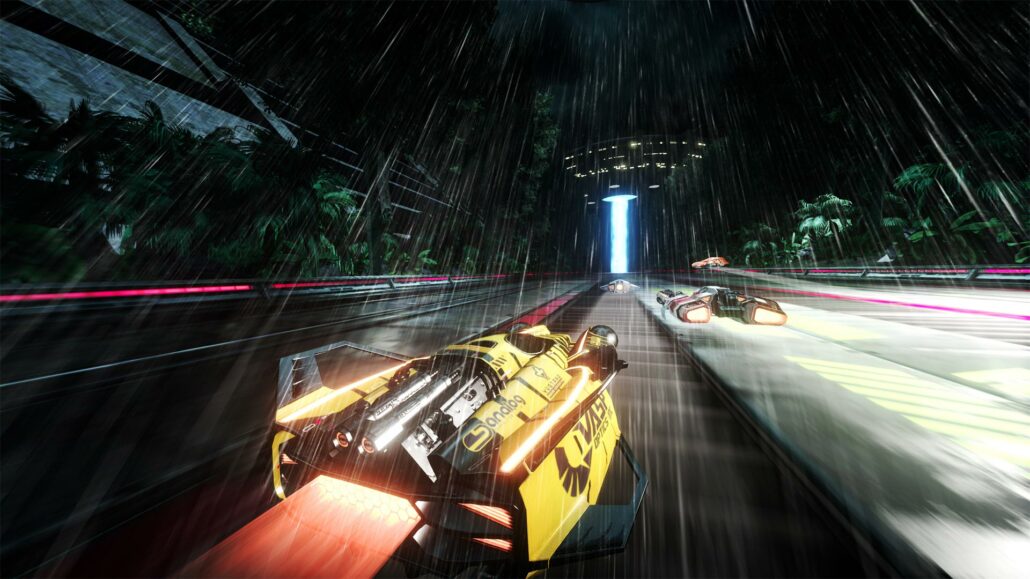 And you might think that if you have already played Fast Racing NEO, what’s the point in purchasing an incredibly similar game, right? Well actually, Fact RMX offers enough new content to warrant a whole new purchase – the smoother gameplay and graphics is just a bonus.

Fast RMX boasts 30 tracks – some brand new, while others will be familiar to Fast Racing NEO players. What’s striking about Fast RMX is seeing such a sharp, graphically impressive game zip by at 60FPS – on a handheld screen, of all things. Tracks are set in arctic valleys, canyons, Neo Kyoto, in space, and they all look so much sharper than they ever have before – heck, they even look good when you’re at a standstill, which is the true test of a racing game’s graphical prowess. 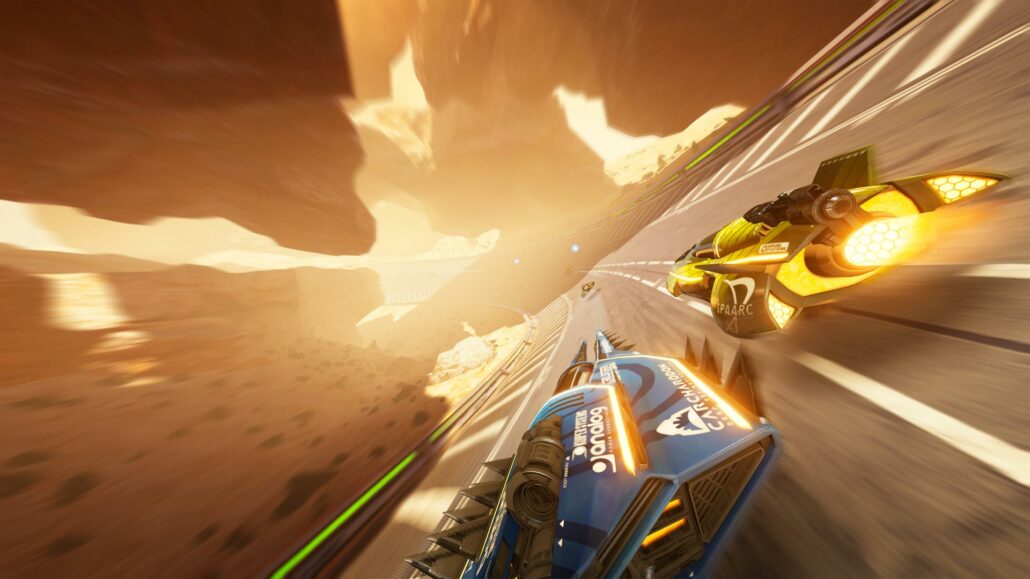 And all that silky smooth speed and visuals would be nothing without solid racing mechanics – and of course, Fast RMX delivers. Triggers drift you across tracks and help with tight bends at high speeds, while the phase-shift mechanic of swapping between blue and orange is still in place from the original. Its place in the game is simple enough; if you race over an orange strip, you want to be in your orange phase, and vice versa for blue ones. This is pretty straightforward at first, with the only punishment for using the wrong phase being slowing down, but later on you’ll need to be in the correct phase for jump pads – messing these up is an instant crash, and in Hero Mode, that’ll cost you the Grand Prix, forcing you to restart from the beginning.

Hero Mode is a nice nod to F-Zero’s crushing difficulty – back in the day, crashing would be, well, death – especially at the 600MPH+ speeds available to you. F-Zero always ran with this and ended your campaign if you crashed out, and Fast RMX has Hero Mode to appease fans of this brutal difficulty. Mind, it includes all of the same tracks and cars, so there’s not much incentive there other than really challenging yourself. 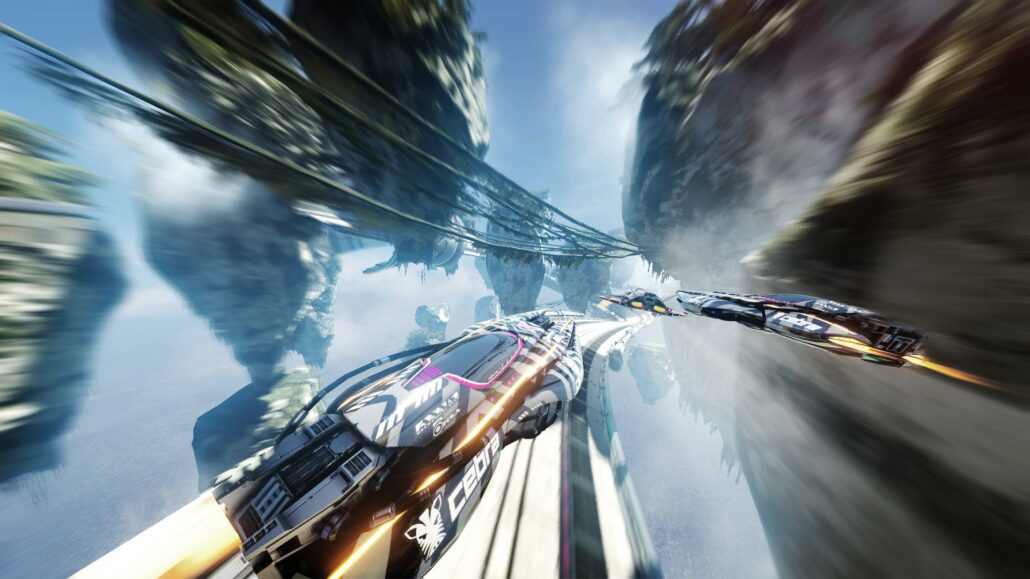 Another nice bonus Fast RMX has earned by releasing fairly early is that it’s one of the few Switch titles with a proper online mode. When racing online, you can go up against seven other players to see who’s the fastest and, well, it works just like you’d expect. I never saw any significant gameplay problems from lag or anything of the sort, whether using WiFi or Wired internet connections – though swapping from Wired to WiFi mid-gameplay is certainly not recommended, despite the plug-and-play nature of the Switch dock.

But by far one of the nicest parts of Fast RMX for me thus far has been portable multiplayer – and I’m not talking about the online kind. I can take my Switch to a coffee shop, or simply play with it in the backseat of a car, and another player can join in using a single JoyCon as a controller. Is it the best way to play? Definitely not. Is it a surprisingly acceptable way to play multiplayer games on the go? Absolutely it is – features like this that excite me for the future of the system. 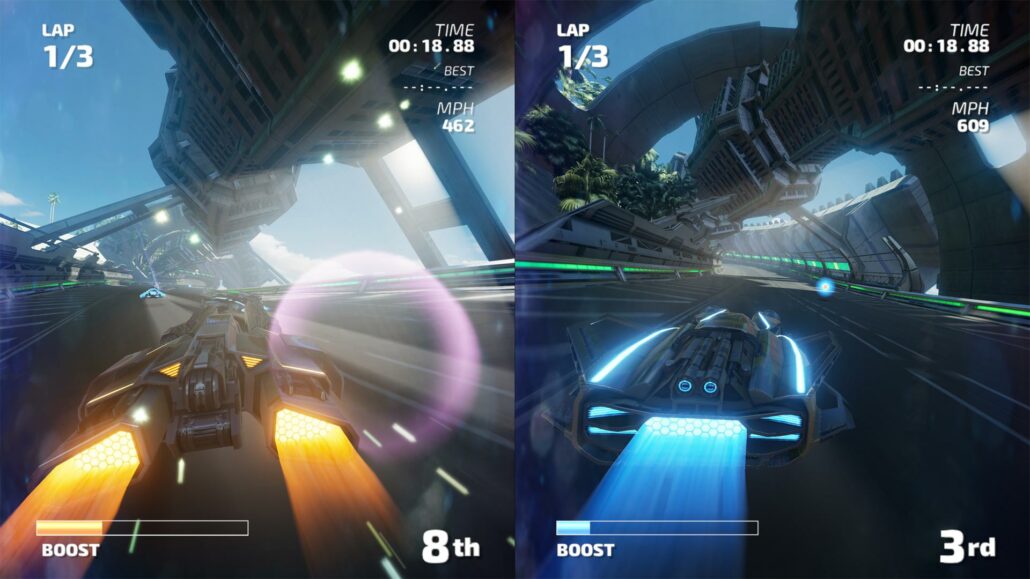 But it’s not all sunshine and rainbows – despite being well worth double-dipping for (if you’ve already bought Fast Racing NEO) Fast RMX is still somewhat lacking in brand new content for those who have played the original game. In fact, this is incredibly similar to the original game, and you’d be forgiven for asking what exactly is new in this version. Despite that Fast RMX is an incredibly well-priced racer, and a Switch purchase you can’t really go wrong with.

Review code provided by the publisher. You can buy the game digitally via Amazon.

Good tracks and great racing combine in this well-positioned futuristic racer. It’s nothing groundbreaking, and is very similar to its predecessor, but it has enough new content and multiplayer fun to keep me coming back for hours.

The Touryst Renders at 6K/4K on Xbox Series X/S; It Almost Looks Like a Good CGI Movie, Says Dev