Microsoft has really thrown a wrench into the usual next-gen console transition process with their new “Smart Delivery” feature, which allows you to buy the current-gen Xbox One version of a game and upgrade to the better-looking Xbox Series X/S version for free. Initially, Sony seemed somewhat reluctant about the idea of free PS5 updates, only promising that they’d “flexibly support the [publisher's] upgrade plan offered for each title.”

That said, since Sony’s initial response, the Smart Delivery concept has quickly caught on, with numerous titles like Marvel’s Avengers, Dirt 5, and Cyberpunk 2077 promising both free Xbox-One-to-Xbox-Series and PS4-to-PS5 upgrades. And now we have another sign that Sony has come around on the concept – as spotted by the folks at Video Games Chronicle, it seems PS4 games that offer a PS5 upgrade, such as Immortals Fenyx Rising, will be branded with a standardized label. 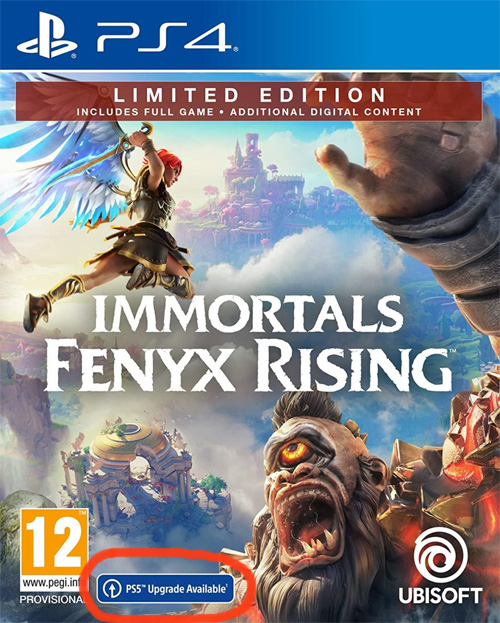 Sony doesn’t have a catchy name like “Smart Delivery,” but the fact that they’re promoting next-gen upgrades at all is a departure for the company. One wonders how widespread this label will be – can we expect games like NBA 2K21 and Control, which only offer next-gen upgrades to those who buy their special editions, to feature it? I suppose we’ll see.

It will also be interesting to see if Sony eventually offers free Smart-Delivery-style upgrades for some of their own games – it seems very likely games like The Last of Us Part II, God of War, and Ghost of Tsushima will end up on PS5 eventually, but Sony has yet to make any official announcements. Hopefully the company promoting free third-party PS5 upgrades is the first sign we won’t have to pay twice to see Kratos or Ellie in all their next-gen glory.

What do you think about the free next-gen upgrade thing? Do you see yourself taking advantage of it often or are you just waiting to buy games on PS5 and Xbox Series X/S?