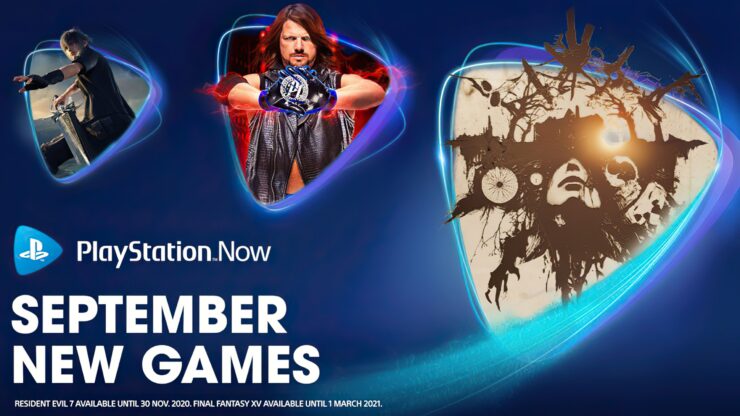 The official PS Now lineup for the month of September just got shared by Sony, and it's a pretty good one. It includes Square's Final Fantasy XV (which will be available on PS Now until March 1st, 2021), CAPCOM's Resident Evil 7 (playable on the cloud streaming service until November 30th, 2020), as well as 2K's WWE 2K19 and Devolver's Observation.

Below we've added excerpts from our reviews of each of these games in order to give you an overview of the value you're getting this month as a PS Now subscriber.

This is a tremendous game and a real return to form for a series that was once lauded for its brilliance but more recently has been mocked for its poor form. Gone are the hammy comments, though there are a few, and back are the puzzles. There are reasons to play the story multiple times, too, thanks to certain moments that change the shape of the story, and you can absolutely speedrun the game, just like the old days.

But it’s the house and the Baker family that make Resident Evil 7 so brilliant. It’s been years since we felt terrified of a game, at points unable to continue without a break, and despite it feeling slightly too long, that’s something well worth celebrating. Resident Evil 7 is back, it’s brilliant, and it’s scary. Who’d have thought we’d be saying that a few years ago? Where it goes next is anyone’s business, but Capcom finally seems to be back on track, and we couldn’t be happier.

'A Final Fantasy for fans and first timers" is the very first thing you read upon launching Final Fantasy XV. It's no word of a lie. This is the Final Fantasy that should keep the older fans happy through the open world, the final fantasy staples: Biggs & Wedge, Chobobos, Cactuars, Cid and even more. At the same time, the story does manage a payoff that is befitting of the excellent characters and ultimately makes up for the slow start.

Is WWE 2K19 championship material? Not quite, but developers Yuke’s and Visual Concepts have made some important strides in the right direction. WWE 2K19 hulks up with some smart new mechanics, a well-produced Daniel Bryan Showcase, and a much-improved MyCareer mode. Does the game still suffer from some in-ring issues and a general lack of polish? Yes, but WWE 2K19 feels like it might just be the first chapter of an inspiring comeback story.

Observation spins a solid sci-fi yarn steeped in ominous atmosphere, but it fails to live up to its intriguing “Play as HAL 9000!” pitch. Too much of the game feels like irritating busy work as you wait for something interesting to happen. Folks who care about story first and foremost will want to give Observation a look, but those hoping for both an engaging plot and mechanics may find this space odyssey a drudgery.

Which one of these titles are you most excited to play via PS Now? Let us know below.