OnePlus 8T is going to be official in over two weeks and a lot of us are excited. However, we were also expecting the company to release a higher-end OnePlus 8T Pro. However, based on the confirmation we have received, that is not happening. Before we tell you the whole story, let's take a recap. OnePlus has been releasing the "T" variants of their devices since the OnePlus 3 came out. Additionally, they have even released some special editions like the OnePlus 6T McLaren Edition. So, when the OnePlus 8T was announced, we hoped that there will be an 8T Pro, as well. Sadly, that is not the case.

The confirmation is coming from OnePlus CEO Pete Lau who has confirmed it on Weibo that there is not going to be a OnePlus 8T Pro this year. You can check out the post below. 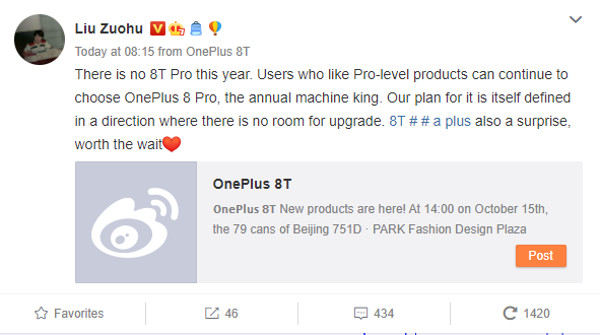 The reasoning that Lau has given is pretty simple and straightforward. For anyone who wants to have the Pro-level experience can choose the OnePlus 8 Pro, Lau has gone ahead and called it the "annual machine king", and has talked about how the OnePlus 8 Pro does not have a room for improvement, to begin with. Based on that statement, it makes sense that OnePlus 8T Pro will not make a lot of sense. I personally agree with Lau's statement as the OnePlus 8 Pro packs pretty much everything you would want in a smartphone, with one of the fastest processor, top-tier camera and screen, and everything else you would want. Making a OnePlus 8T Pro would make little sense as the upgrades would be very minor.

Lau also goes on record and talks about how the OnePlus * is going to be a surprise worth the wait, which is kind of contradictory based on the leaks and reports that we have had our hands-on. For starters, the leaked renders showed a design that is reminiscent of the Galaxy S20 series devices. We also know what the specs are going to be, and more importantly, OnePlus itself confirmed the existence of 65-watt Warp Charging in the OnePlus 8T.

All that is left is the official announcement that is going to be on the 14th of October, next month where the company is going to unveil the OnePlus 8T.