OnePlus 8T is anything but a mystery at this point, to be honest. The device will be announced next month. So far, we have seen numerous leaks that have confirmed everything that we needed to know about the device. Information such as how the device is going to look or the specs that it is going to offer.

One of the interesting bits here is that the OnePlus 8T is going to bring 65-watt WarpCharge this time, around. Making it one of the fastest wired charging, if not the fastest available in the market. Today, we have more details in the form of a tease trailer, as well as a picture of the charger itself.

Now, 65-watt on paper does sound fast, but how fast is fast, to begin with? Well, OnePlus is touting this with a slogan that says "a day's power in 15 minutes", and there are also bold claims that the OnePlus 8T is going to be able to charge up to 58% in just 15 minutes, and 100% in just 35 minutes.

The announcement is coming from the company where they shared the information on how this charging is going to work. This is what the company had to say.

Faster without compromise
You may have seen our little tease yesterday. That’s right, Warp Charge 65’ leverages a twin-battery configuration, that allows the device to be charged up faster than ever before seen on a OnePlus device. With this new setup, both batteries can charge at more than 30W simultaneously while staying cool even when using the phone.

Together with the incredibly fast charging ability, OnePlus 8T’s 4500mAh large battery capacity can deliver a day’s power in 15 minutes. You’ll be able to charge your phone within minutes, getting a day's power for your phone even when making coffee or having breakfast in the morning. Battery anxiety is a thing of the past.

One charger to rule them all
The OnePlus Warp Charge 65 Power Adapter doesn’t simply charge the OnePlus 8T in a heartbeat, it might also be the only charger you’ll need. It features a dual-end Type-C port design, offering better compatibility and supports upto 45W PD fast charge. That means it gives you the freedom and ability to juice up multiple supporting devices from your OnePlus Buds to even your laptop. The charger is also backward compatible with our previous charging protocols, meaning you can still enjoy the same speeds you’re used to while charging any OnePlus device.

As for the teaser itself, you can look at it below.

If you still want more, the company also shared the image of the charger on their official Weibo account. 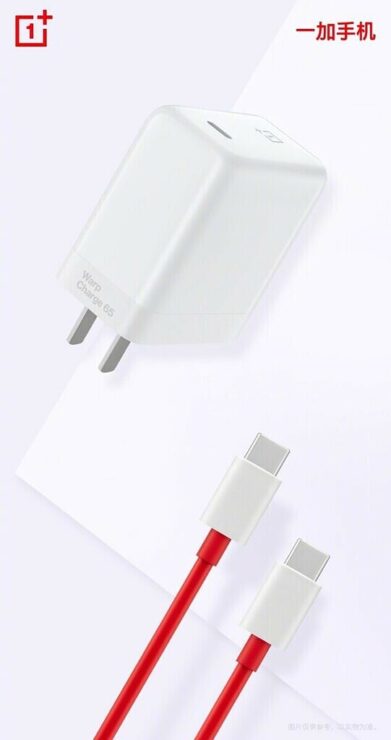 As you can see, the charger is smaller than what OnePlus is currently shipping. Additionally, you are getting a USB Type-C to Type-C connectivity. The charger is obviously going to support USB PD up to 45W.

Sadly, the OnePlus 8T is not going to ship with wireless charging. The reason being is that in order for the charging coil to fit, the phone would have needed to be thicker than it already is. Which makes total sense.

The OnePlus 8T is going official on 14th October. We are hoping that it will be cheaper than the current offerings that the company has.