Now I have been explaining since a few days how the Radeon R9 370X and Radeon R7 370 pose trouble for the current market position of NVIDIA. The Radeon R7 370 retails for $149 US and the upcoming Radeon R9 370X will retail for $179 US since that's the next price segment AMD wants to cover after the $199 US R9 380. The entry of new sub-$200 cards is great to get hands on the budget tier market which hasn't been updated since the last Radeon 200 series parts by AMD. NVIDIA on the other hand, also hasn't introduced any new graphics card in this market since the last years, GM107 based, GTX 750 and GTX 750 Ti. While AMD's cards are nothing more than refresh that reuse the same Pitcairn core architecture that is now renamed to Trinidad, they do get competitive pricing which raises the value of these aging cores that support DirectX 12 API.

The GeForce GTX 750 Ti and GeForce GTX 750 have done their part in the market and truthfully speaking, they aren't a match to the faster Trinidad based cards. The GeForce GTX 960 currently stands against the Tonga Pro powered Radeon R9 380 with both cards fighting it out at $199 US but NVIDIA is now ready to take the fight in the sub-$200 range with their GeForce GTX 950 graphics cards. While priced similar to the Radeon R7 370, the GTX 950 will end up faster than the Radeon R7 370 and on par with the Radeon R9 370X that will retail at $179 US and more for custom variants. Now I would like to talk more about performance numbers but let's read the specifications first and then get back to it.

The GeForce GTX 950 is going to feature the GM206 GPU (GM206-250-A1) that features six SMM units that house 768 CUDA Cores, 48 texture mapping units and will retain the 32 ROPs. The reference model will presumably come with clocks of 1089 MHz base and up to 1266 MHz boost clock speeds while the benched Gainward model boosted up to 1430 MHz which is quite impressive. On the memory side, the card will feature 2 GB of GDDR5 VRAM that operates along a 128-bit bus, running at 6.6 GHz and a maximum bandwidth output of 106.7 GB/s. The card is going to feature a 90W TDP which will be 10W lower than AMD’s entry level card (R7 360) but overall, the GTX 950 will be the faster out of the two. Based on the same GM206, the GeForce GTX 950 will showcase a 30W drop in TDP numbers compared to the 120W, GeForce GTX 960. Display ports on the card will include Dual-Link DVI-D/DVI-I, HDMI 2.0 and a Display Port 1.2 connector on the reference variants. 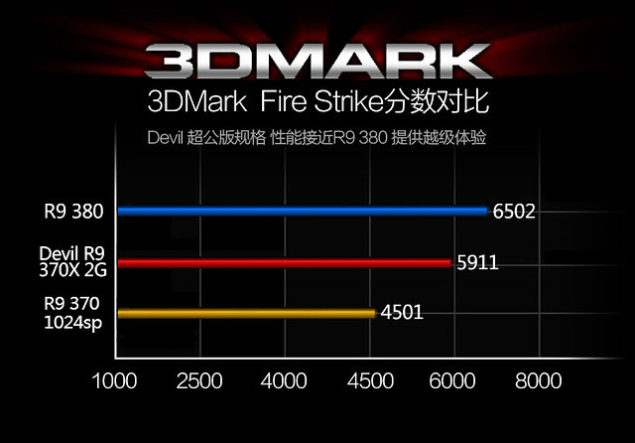 We first saw the Radeon R9 370X around a month ago and the latest (unofficial) review was published two weeks ago. The card is already up for sale on Chinese retail sites making it a silent launch and AMD has no words by themselves on the availability of the new graphics card. The GeForce GTX 950 on the other hand is allegedly going to launch tomorrow and we will see whether it lives up to be a great budget entry or not.