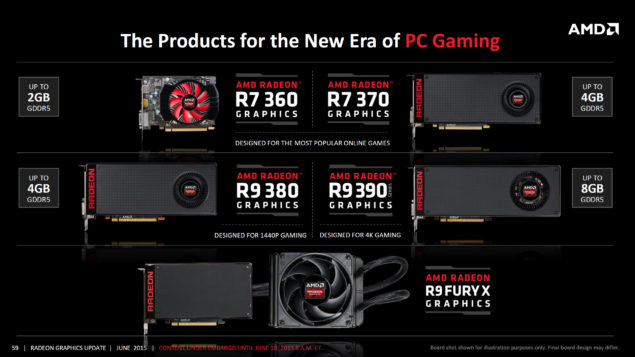 The AMD Radeon 300 series exists of several cards based on chips which we might not have heard of before but definitely know them by a different name in the existing cards. The top most Fiji GPU is the only new chip in the lineup followed by Grenada which is a new name for Hawaii GPU, Antigua is the Tonga GPU core, Trinidad is the Pitcairn GPU core and Tobago is the Bonaire GPU core. All these GPUs feature aggressive prices followed with additional VRAM to deliver perfect performance suited for a specific resolution. The new cards support DX 12 API and feature support for AMD's Virtual Super Resolution technology, Freesync technology and a ton of other features. Listed below are all cards that have been launched within the 300 series lineup along with their specifications, performance and launch prices:

Starting off with the top end AMD Radeon R9 390X, we are looking at the Grenada XT (Hawaii XT) core with 2816 stream processors, 176 TMUs and 64 ROPs. The card features a clock speed of 1050 MHz and has the 8 GB GDDR5 VRAM clocked at 1500 MHz that runs across a 512-bit wide I/O interface and pushes out 384 GB/s bandwidth. The card is powered by a 6+8 Pin configuration and will be available at retail with a price of $429 US. The second card is the Radeon R9 390 which comes with the Grenada Pro (Hawaii Pro) core with 2560 SPs, 160 TMUs and 64 ROPs. The card has clock speeds of 1000 MHz core, 1500 MHz memory clock (6.0 GHz QDR) and has 384 GB/s bandwidth output. The card is priced at $329 US. The cards are available in a revised blower styled cooler with a cool mesh and have Dual-Link DVI, HDMI and a single Display connector for display ports. Both cards have a 275W TDP and are powered by a 8+6 Pin power configuration. 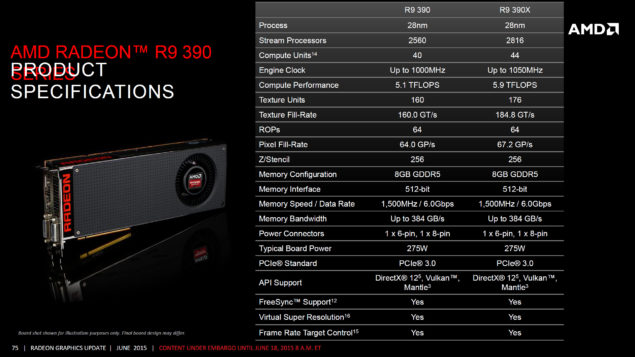 Next up, we have three Antigua (Tonga Pro) based Radeon R9 380 cards which feature 1792 stream processors, 112 TMUs and 32 ROPs. Featuring a better architectural design over Hawaii, the chip comes at a clock speed of 970 MHz core and has the memory clocked at 1425 MHz for the 2 GB and 4 GB variants. The memory operates along a 256-bit wide bus interface and pumps out 182.4 GB/s bandwidth while the board has a rated or typical power consumption of 190W. The Radeon R9 380 churns up 3.48 TFlops of compute performance (FP32). The cards are priced at $199 US and plus for the 4 GB variants. 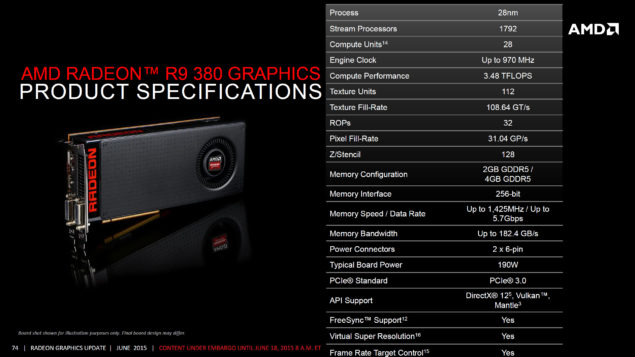 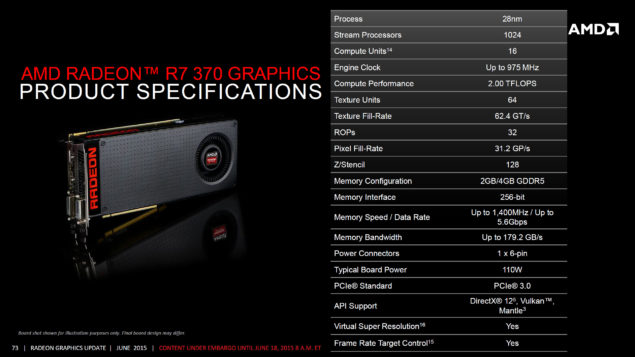 Last up is the Radeon R7 360 which is based on the Bonaire Pro core with 768 stream processors, 48 texture mapping units, 16 raster operation units and has been rebadged to Tobago. The chip is clocked at 1050 MHz while the 2 GB GDDR5 VRAM comes clocked at 6.5 GHz across a 128-bit bus interface, pumping out 104 GB/s bandwidth. The card is powered by a single 6-Pin connector and has a compute performance of 1.61 TFlops. We should see a Display Port, HDMI and DVI-I connector on this card also has a power consumption rated at 100W. You can see details of the reference models in the table below: 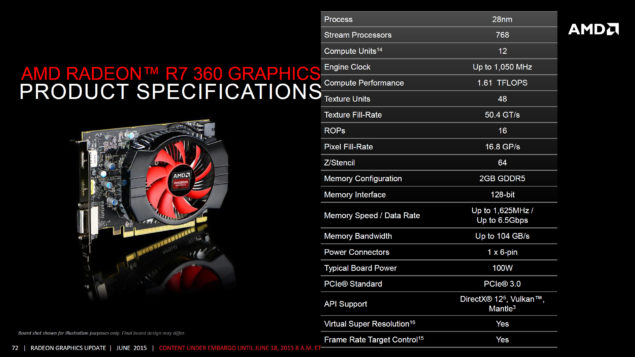 The Radeon R9 380 is aimed against the GeForce GTX 960 with its 1440P aimed 4 GB and 1080P aimed 2 GB memory. The card can play games at 1440P with 4 GB models but the FPS mostly average around 30 FPS so the most ideal scenario would be to tone down the settings or switch to 1080P when playing running an R9 380. The card performs around 10% faster than the GeForce GTX 960 however the Maxwell cards tend to perform much better when overclocked compared to Tonga Pro based cards.

The AMD Radeon R7 370 and Radeon R7 360 are ideally positioned against the GeForce GTX 750 Ti and GTX 750 respectively. Both cards have a competitive edge in pricing and performance since NVIDIA hasn't done anything surprising in the sub-$150 market which AMD calls the sweet price-point market. The Maxwell GM 107 cards were launched at very high prices compared to their predecessors due to the new efficiency and architectural improvements that came with Maxwell but it looks like NVIDIA will either have to significantly drop prices on their cards or introduce competitive parts in this price range.

Note: Our own review of the Radeon R9 390 and Radeon R9 390X goes live next week. We will be able to show some performance reviews with the latest drivers soon!