The Powercolor Devil R9 370X which has been the news since a couple of days has once again been leaked by previewed ahead of its launch. This is actually the third preview of the card which we will be looking at which makes me believe that the R9 370X will be a silent launch from AMD since there has been no word regarding the card except from Chinese sites which already have these in hands, some are even up on sale in Chinese online retail sites. 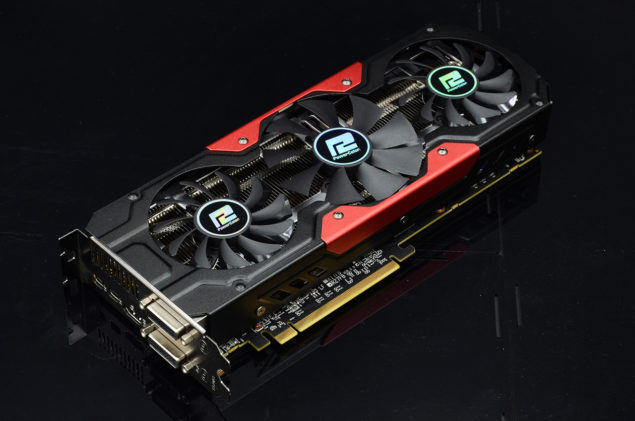 The AMD Radeon R9 370X which will be available in custom variants is going to launch any time now given the amount of leaks and previews we are seeing, the question is exactly when?. The Radeon R9 370X is going to be the successor to the Radeon R9 270X which was launched two years back. These cards have one thing common and that is both cards are based on the Pitcairn XT GPU which was originally launched in 2012 on the Radeon HD 7870 graphics card. While the Radeon R9 370X is based on Pitcairn XT (Trinidad XT), the chip has received power optimizations and clock improvements which lead to better power efficiency compared to the Radeon R9 270X and the HD 7870. AMD has reused several existing GPUs and added minor optimizations to the power delivery so that they can save costs on RnD and focus on a single flagship chip known as their Fiji GPU which is going to be part of four individual cards (R9 Fury X, R9 Fury, R9 Nano, R9 Fury X2), all of which incorporate the High-Bandwidth Memory standard.

The specifications of the Radeon R9 370X are pretty straight forward and they will remind you of the Radeon R9 270X and HD 7870. The Trinidad XT GPU core features 1280 stream processors, 80 TMUs and 32 ROPs. Since the GPU is the same as Pitcairn XT, we are looking at a 212mm2 die that houses 2.8 Billion transistors. The Radeon R7 370X card comes with a clock speed of 1180 MHz and a memory clock of 1400 MHz (QDR) which pumps out 179.2 GB/s bandwidth. The Radeon R9 370X is going to feature up to 4 GB of memory that will run across a 256-bit bus interface. These aren't massive changes over the Radeon R9 270X but we will see how the small changes will make this card a competitive offering for AMD.

As far as the design is concerned, the Powercolor Devil R9 370X spans two good slots with its full length cooler that incorporates three fans (2 x 80mm and 1 x 92mm). The card comes in the Devil’s traditional red and black color scheme that has a nice black backplate to keep components cool and hidden on the back. A large heatsink that comprises of several aluminum fins dissipates heat through four large copper 6mm heatpipes that are cooled down by the PWM fans. The card comes with Dual-DVI, HDMI and two mini Display Port connectors. Beneath the heatsink lies a 7+1+1 phase digital power supply with IR DirectFET MOSFETs and voltage is regulated through the CHL8228G PWM chip. The power is fed through dual 6-Pin connectors but where the R9 270X consumed 180W, the Radeon R9 370X will have a TDP rated around 150-160W.

The performance numbers in synthetic benchmarks are similar to what we've seen a few days ago in Expreview review. The Radeon R9 370X scores X2761 marks in 3DMark 11 and 3035 marks in 3DMark Firestrike Extreme. The Radeon R9 380 scores around 3500 marks in 3DMark Firestrike while the GeForce GTX 960 scores around 3600 Marks in the same benchmark which might give you an idea of the performance. The difference is that the Radeon R9 370X will be priced in the range of $169-$179 US while the R9 380 and GTX 960 cost $199 US. The gaming performance was tested in several titles, unfortunately I can't name all of them since they are mentioned in Chinese. But I can tell you that the two bars represent Average FPS and Minimum FPS (Light Green is Minimum and Dark Green represents Average FPS).

The temperatures of the card are a steady 32C at idle and 69C at load with Furmark test. There was a very interesting thing to note during the Furmark test, taking in equation the new power tune and frequency boost algorithm that's found on the new GCN 300 series cards, the Radeon R9 370X clocked itself down to 1150 MHz from its original frequency of 1180 MHz once the GPU temperature went past 65C. The sudden decrease of clock speeds will result in slight affect in gaming performance but overall 30 MHz decrease shouldn't make a ton of difference. When comparing with a Radeon R9 270 graphics card, the Radeon R9 370X consumed 20W lower power at 226W system power compared to 245W on the Radeon R9 270 system. Considering that the card is going to compete against NVIDIA's Maxwell based, 90W GeForce GTX 950 graphics card that will also be set at a price close to $149 US, the competition will be good to see from both teams.