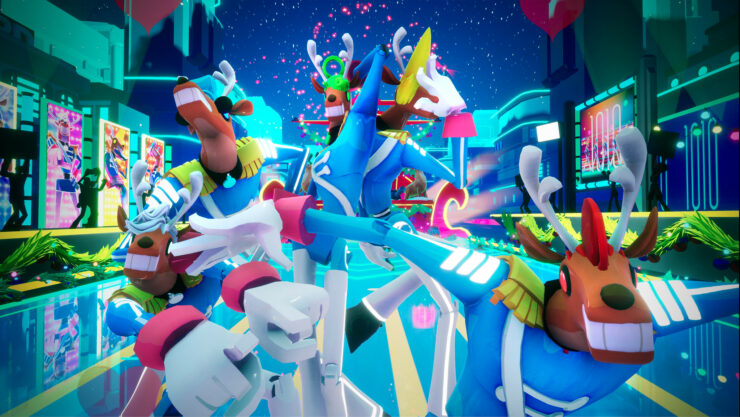 Bunk Bed Junction is about to head out on its comeback tour for the holidays in No Straight Roads. Developer Metronomik and publisher Sold Out announced that the game is getting a free "Christmas Edition" update across Xbox One, PlayStation 4, and PC. The Switch version will be releasing at a later date further down the line, though there isn't a target date just yet.

The update brings a variety of Christmas decorations into the world of No Straight Roads. That means some fun musical remixes for the holidays, including Christmas music, outfits, album art, visual alterations, and decorations to help players ring in the holiday season.

The bosses even get in on the fun, with changes to their stages, look, and even music. You can select the "Christmas Edition" version of the game through the boss fight menu in Vinyl City to see how everything has changed.

Here's the rundown for what you can expect in the base game with No Straight Roads:

"Mayday and Zuke's journey to take down the Electronic Dance Music empire in Vinyl City and bring back Rock into the spotlight is presented with some nicely directed cutscenes complete with full voice acting that do a great job in bringing out the characters and setting's personality. There is a clear early 2000s cartoon feel that makes everything feel light-hearted, joyous, and a tad crazy, and it couldn't have been any other way, with the game's ludicrous premise."

With the Christmas content being added to the game, that should give even player who completed the main storyline some exciting new reasons to come back as we descend upon the holidays very soon. The Switch content debut date should be coming along at some point, but for now users on that platform will have to remain a bit patient.