No Straight Roads Hands-On Preview – For Those About To Rock, We Salute You 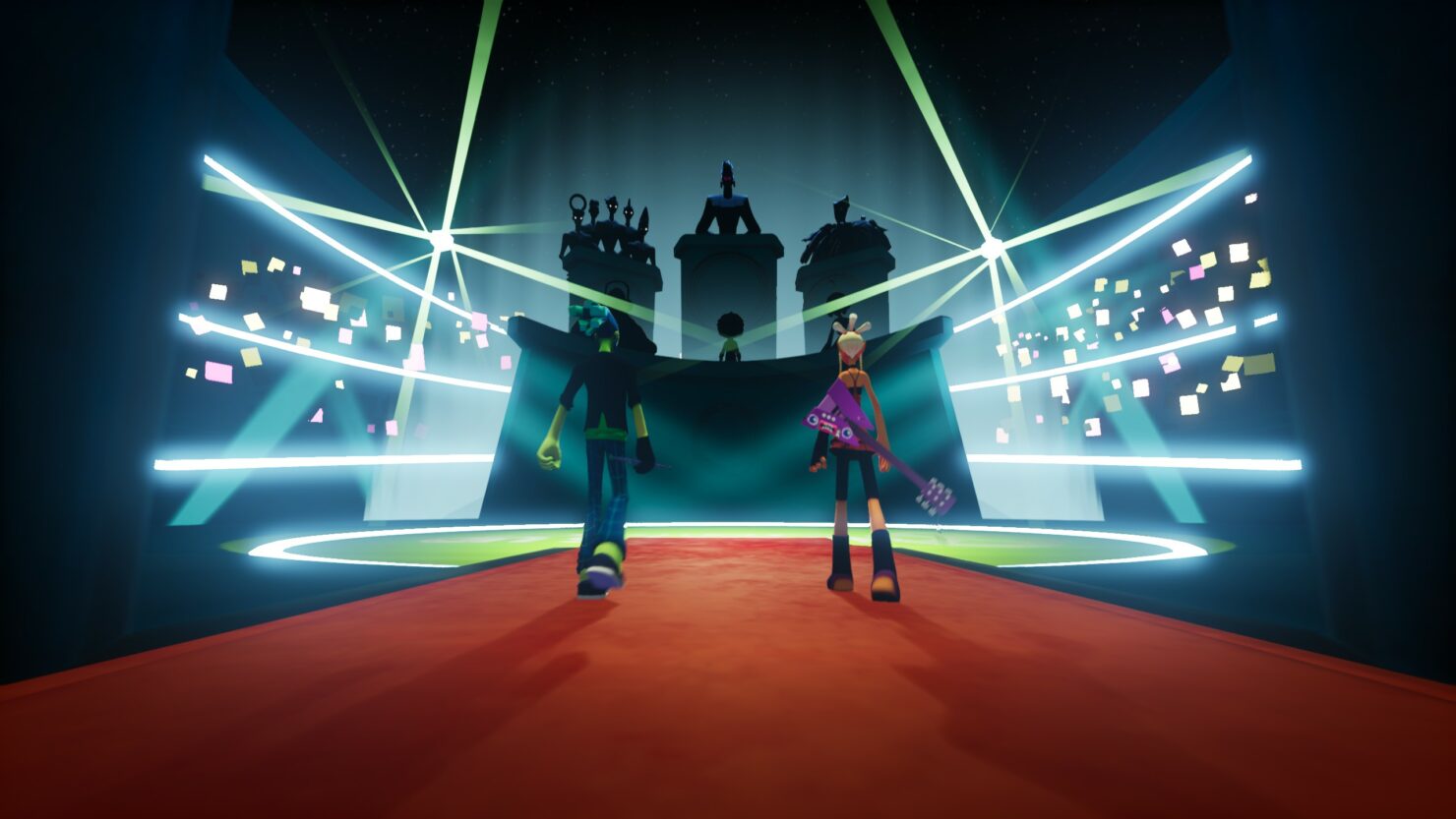 No Straight Roads was among the most interesting games we checked out during last year's E3. The unique combination between platform, action-adventure, and rhythm games created by Metronomik looked, sounded, and played great, and so I was eagerly anticipating being able to experience more of it. The wait was long, but it was well worth it.

The new 90-minute long demo fleshes out the game considerably more than the short E3 2019 demo, providing new information on the story, characters, and the gameplay systems that power the rhythm-infused action.

Mayday and Zuke's journey to take down the Electronic Dance Music empire in Vinyl City and bring back Rock into the spotlight is presented with some nicely directed cutscenes complete with full voice acting that do a great job in bringing out the characters and setting's personality. There is a clear early 2000s cartoon feel that makes everything feel light-hearted, joyous, and a tad crazy, and it couldn't have been any other way, with the game's ludicrous premise. 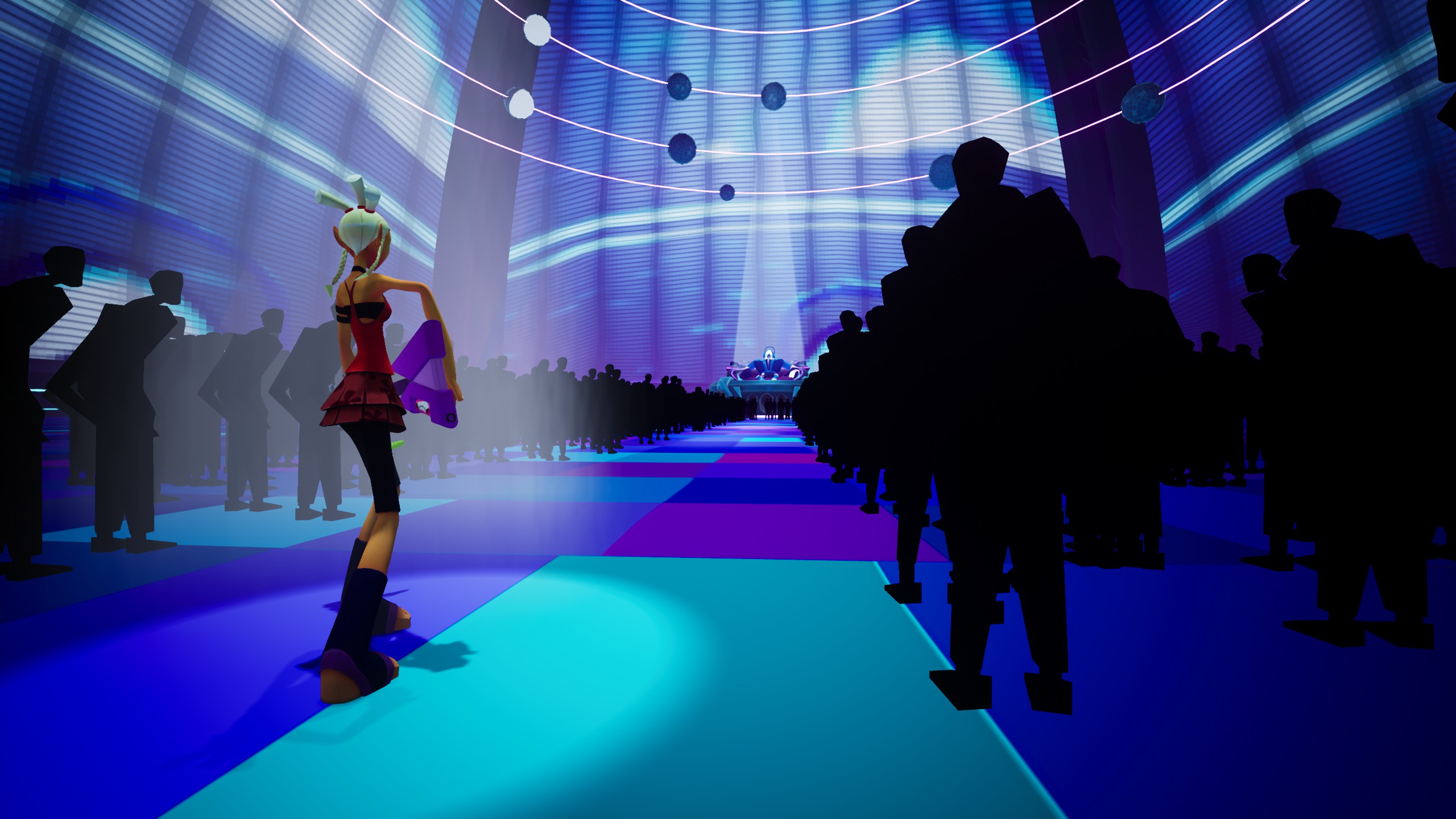 Following Mayday and Zuke's failed audition, where gameplay basic like the main character's different attack types are introduced, players are presented with the fight against the fearsome DJ Subatomic Supernova. This boss battle is rather on the simple side, teaching players how to react to flashy special attacks in time with an incredibly catchy song, but it is just an appetizer for what is to come.

Once DJ Atomic Supernova's concert has been hijacked, the game opens up considerably in unexpected ways. Instead of presenting simple menu-based navigation, No Straight Roads allows players to explore the streets of Vinyl City, interact with NPCs and find a lot of different collectibles, including the Mini QWASAS that are used to power-up devices all around the city to unlock new areas and gain more fans that, in turn, can be used to power-up the two playable characters. The first district available in the demo is quite large with a lot of nooks and crannies, so it will be very interesting to see how much more complex the following districts will be.

The surprises did not end with Vinyl City's exploration. After meeting with Bunk Bed Junction number 1 fan Zeke, the Sewer Hideout is expanded with new facilities like the Briefing Room, where it is possible to learn more about the next EDM artist to eliminate and check out collectibles that provide information on the story and characters, the Workshop, where it is possible to assign special moves and equip stickers, temporary buffs that last for a single stage, and the Underground Gig, where it is possible to use fans to unlock abilities through three different skill trees, one for Mayday and Zuke each and a general one that features abilities like a double jump. 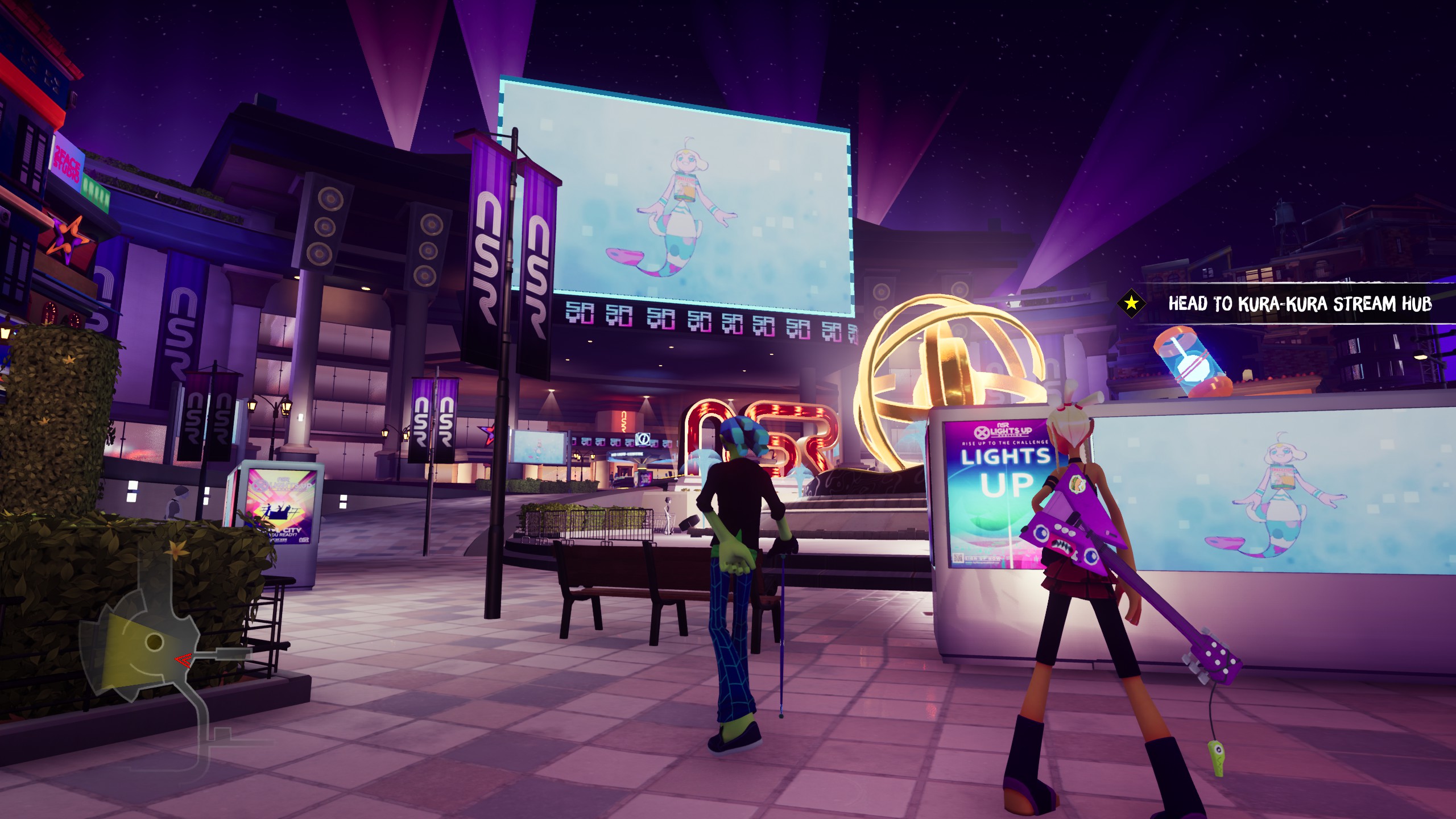 It's with the hijacking of Sayu's concert that No Straight Roads shows its true color. Everything about this mission is hilariously over-the-top, as Sayu is a virtual idol that holds livestreaming concerts. As such, it's not surprising that the ensuing boss battle is way more involving and complex than the confrontation with DJ Atomic Supernova.

Before reaching her, however. players will have to go through different sections of a stage and defeat all the enemies to unlock gates to proceed to the next. Enemy configurations are rather varied, featuring unique timings for their attacks with complexity increasing as the player gets closer to the boss. To be honest, things are a little on the easy side, at least in this stage, but the mission ranking system should give an incentive to clear the stage without getting hit and keeping the combo counter going for as long as possible.

After clearing 10 sections, it is time to take on Sayu in a battle that can only be described as epic. The fight is divided into different phases that play on the mechanics introduced in the preceding stage, obviously upping the ante with increased complexity. As Sayu has been created by a team of designers, they do get involved in the fight, adding more creative attacks that are also governed by the music. So, you will have to deal with arrow pointers trying to come at you from the visual designer, strips of film from the video editor and so on. It is an incredibly creative way to make the battle more intense without resorting to gimmicks that do not sit well with the established lore. 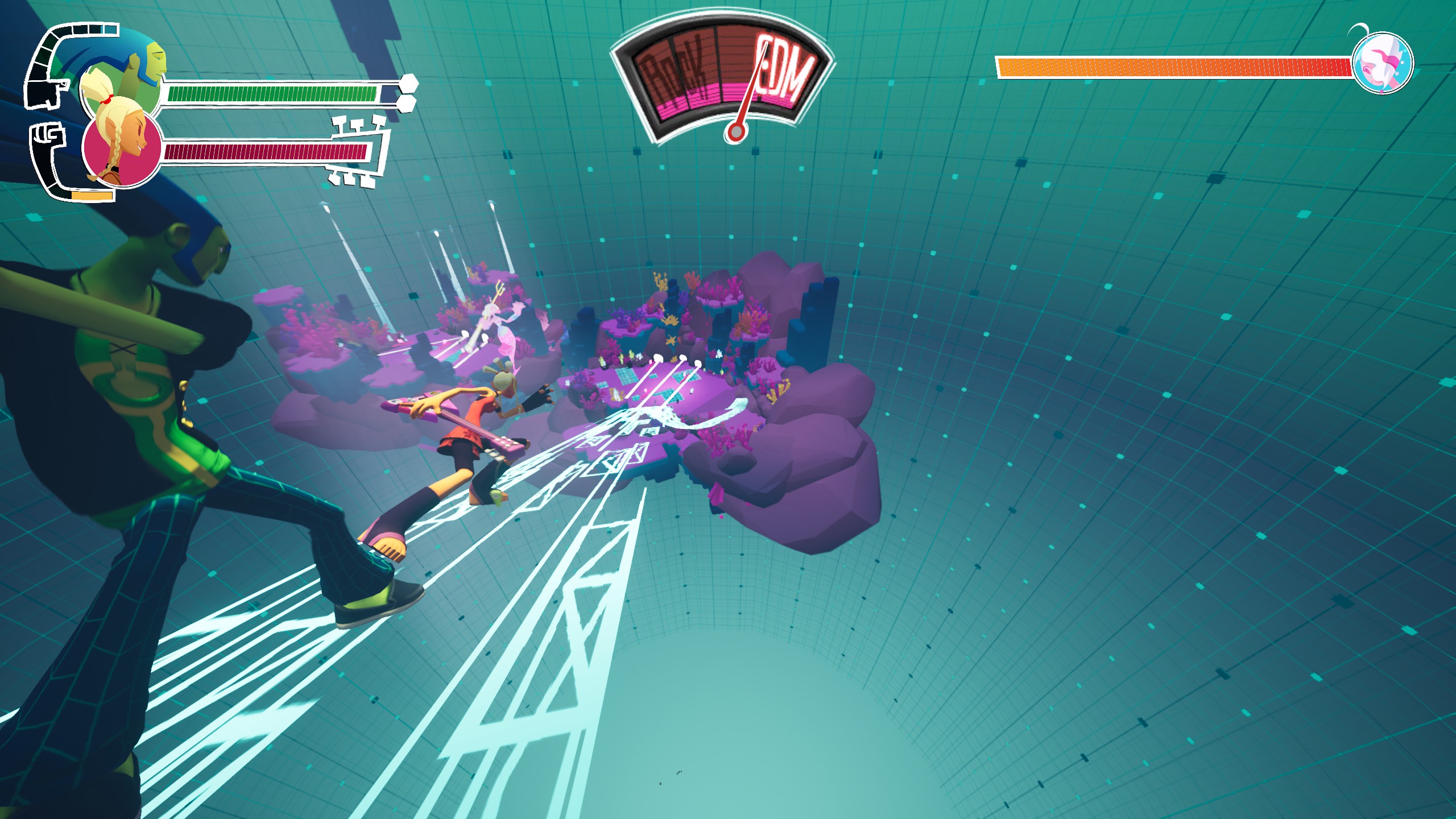 No Straight Roads already left me impressed with its stylish presentation last year, but the new demo definitely sealed the deal, revealing an amazingly creative gameplay design, an unexpected level of depth, and one of the catchiest soundtracks ever made. If this is will be the level of quality of the entire experience, we will be in for something very, very good. I personally really cannot wait to get my hands on the final game to see what other crazy ideas Metronomik has come up with.

No Straight Roads launches on PC via the Epic Games Store, PlayStation 4, Xbox One, and Nintendo Switch on August 25th.