Labelled as Motorola XT1100 Nexus X, the smartphone packs a 5.2-inch screen, will be powered by a quad-core 2.7 GHz Snapdragon 805 chip, and will feature a 13.1 megapixel primary camera. The device will be powered by Android 5.0 Lemon Meringue Pie and will be available with 32 GB or 64 GB internal storage options.

This Nexus X specs information comes from a French retailer fnac with a starting price of €419.99 off the contract. The 64 GB variant will be priced at €449.99. Earlier rumors had indicated that Nexus X will have a Quad HD (1440 x 2560) resolution and Adreno 420 GPU - nothing about those features is mentioned in the retailer's image.

The most interesting bit about this Nexus X specs leak is though the mention of the Android 5.0. Seems like our favorite, redesigned Android L have finally got a name - a good name at that. 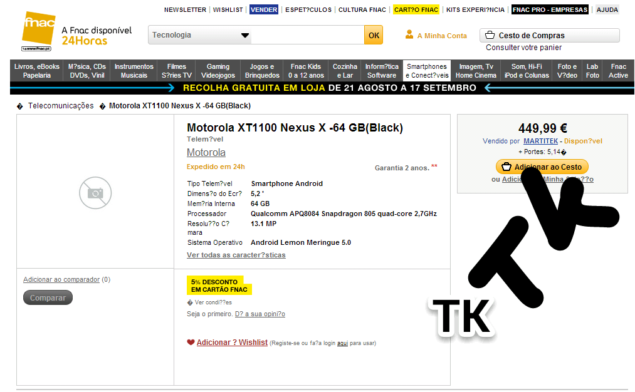