Just two weeks back word on the street was that Motorola was working on the next Google Nexus device or the Google Nexus 6 smartphone. This information was courtesy of a a device codenamed 'Motorola Shamu' which was spotted in the Google Issue Tracker Platform. According to the source of the information, Android Police, the information was quite concrete. They claim that their source had mentioned HTC's 9 inch Volantis and the Motorola Shamu together. 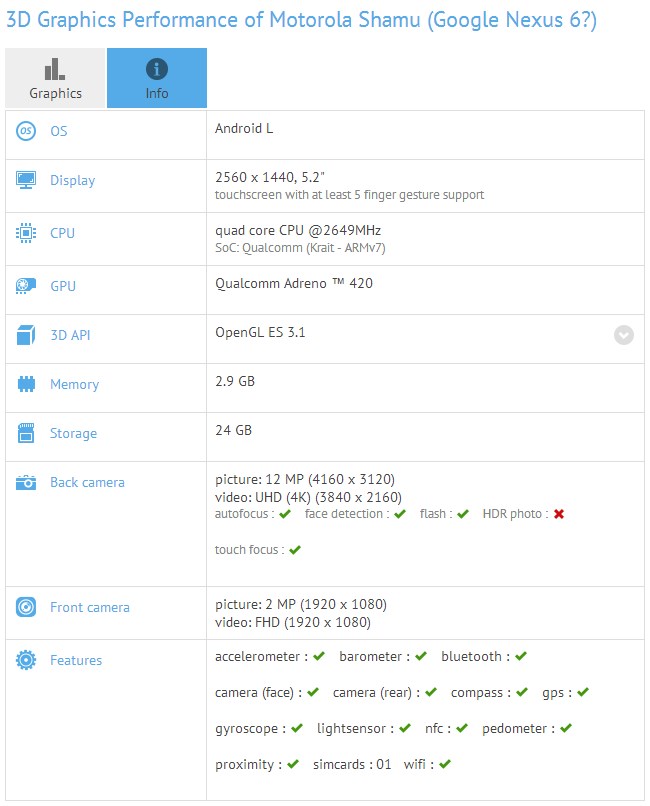 The specs leaked on GFXBench show a device running on a 2.6 GHz Qualcomm Snapdragon 805 with an Adreno 420 GPU. The Motorola Shamu also seems to beat LG's Korea G3 which also runs on the Snapdragon 805 by a full 247 frames on the Manhattan test. Both the devices have a similar resolution of 2392 x 1440 as well. We also get to know the specifications of the Motorola Shamu in detail this time. Apart from the 805, the device will come with 24 GB of internal storage couple with 3 GB of RAM.

This will be coupled with a 12 MP rear camera capable of 4K UHD video recording. The front camera will have a resolution of 2 MP and will be capable of recording FHD videos. The screen size on the Motorola Shamu is 5.2 inches and of course, the device will come with Android L. These specs point out towards an impressive device indeed. Coupled with the 9 inch Volantis, Google is expected to launch the devices sometime in September.