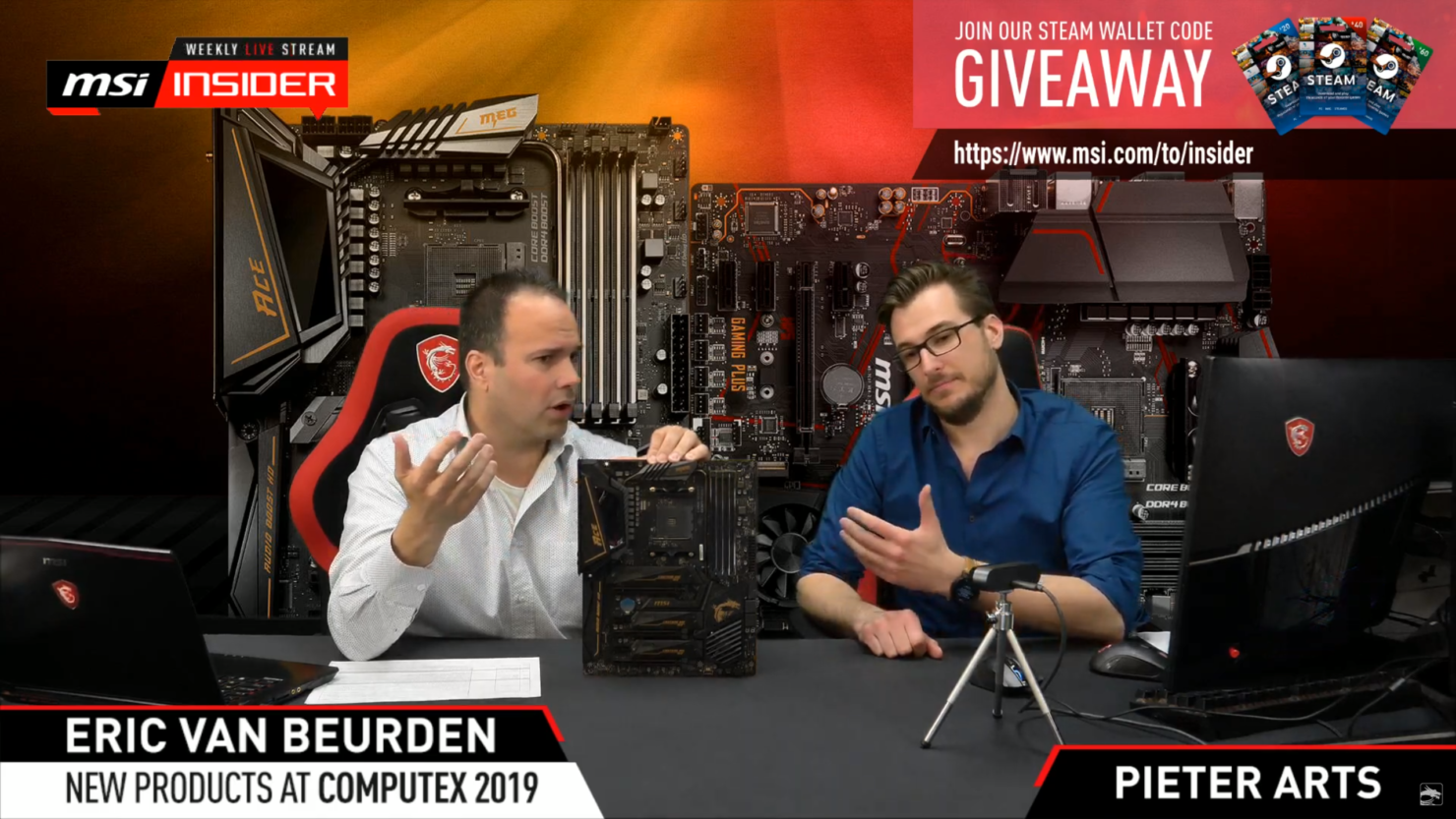 MSI has just unveiled its next-generation X570 chipset powered products for AMD Ryzen 3000 CPUs which will include the MEG X570 ACE and the X570 Gaming Plus boards. While we have already seen a couple of X570 motherboards from MSI, this is the first time they are officially previewing their new products prior to the official announcement Computex 2019.

The AMD X570 and Ryzen 3000 CPUs are just a week away from the official announcement but it looks like MSI wanted to give us an early preview of what they are unveiling at the event. We have already seen two X570 motherboards from MSI in previous leaks but we just got a bit more info on the upcoming products along with the first look at their enthusiast class X570 product.

The MSI MEG X570 ACE motherboard is the enthusiast tier offering which is part of the Enthusiast Gaming lineup. The motherboard rocks an impressive 14+2 phase VRM design and is powered by dual 8-pin connectors. This motherboard should allow for some good overclocking on AMD Ryzen 3000 series processors. The motherboard has a solid design layout with both the DDR4 DIMMs & PCIe slots shielded by a metal brace. There are four DDR4 DIMM slots on the board which would support up to 64 GB of memory capacity with speeds beyond 4000 MHz OC+. 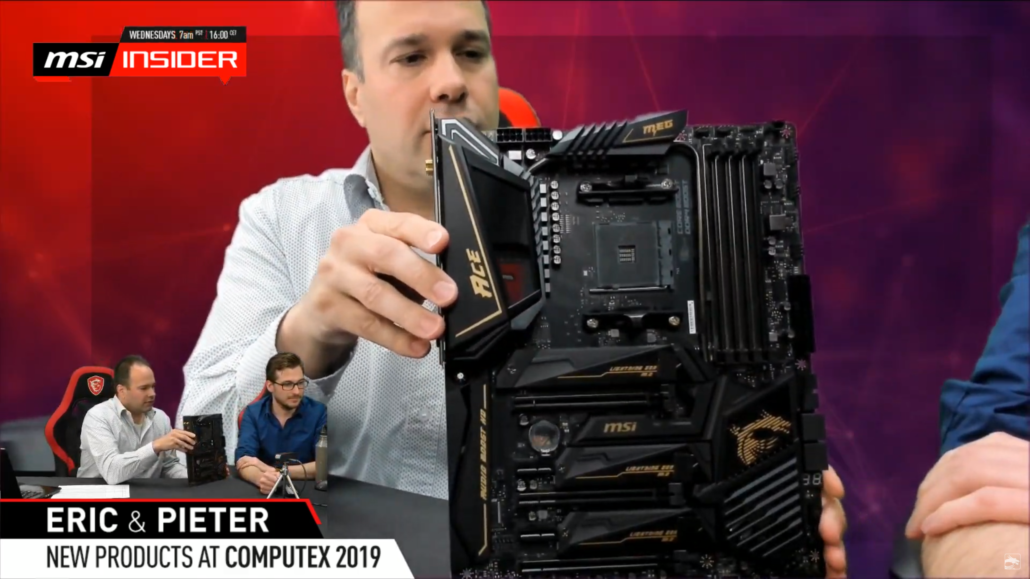 There seem to be at least 6 SATA III ports for storage, a right-angled USB 3.0 port, and a BIOS DEBUG LED right beneath the SATA ports. In terms of expansion, the motherboard has three PCIe 4.0 x16 slots, two PCIe 4.0 x1 slots and triple M.2 slots, all of which are covered with MSI's own thermal heatsink solution. The PCH has a massive heatsink which includes a LED display with the MSI Dragon logo and also has vents which cover the propeller blade fan that comes with MSI's Zero Frozr technology which essentially stops the fan when it's not under much load. The board also has a full coverage heat pipe that runs from the PCH heatsink and all the way to the top VRM heatsinks.

MSI is also using their infinity display around the I/O cover which looks amazing when the board is running. In terms of I/O, the board has a Clear CMOS switch, a BIOS flashback switch, PS/2 port, 8 USB ports which are a mix of USB 3.0, 3.1 Gen 1 & Gen 2, dual Gigabit Ethernet Lan ports, a 7.1 HD channel audio jack, and two antenna jacks which support WiFi 6.

Moving on to the higher-end MSI X570 Gaming Pro Carbon, we are looking at what seems to be a 12 phase VRM which should deliver some really good overclocking results on the upcoming AMD Ryzen processors. The AM4 socket is powered by an 8+4 pin connector configuration and there are the MSI DDR4 Boost and Core Boost technologies that should automatically tune up clocks from within the BIOS. There are four DDR4 DIMM slots that can support up to 64 GB of DDR4 memory. Supported clock speeds aren't mentioned but we have seen up to 4000 MHz OC+ memory support on BIOSTAR's X570 Racing GT8 motherboard so we should expect higher memory clock support on the Gaming Carbon.

MSI has there Dragon theme and carbon textures all across the motherboard and we can also see active fan cooling on the PCH which is a common theme for all X570 motherboards we have seen so far. The MSI X570 Gaming Carbon seems to have solid I/O and a metal fin heatsinks along the CPU VRMs and a great looking I/O panel cover with RGBs that are compliant with MSI's Mystic Aura lighting technology.

Lastly, we have the MSI X570 Gaming Plus which is a more budget-tier offering with standard aluminum heatsinks that are placed over what looks to be a 6 or 8 phase VRM supply. Power to the socket is supplied through an 8+4 pin connector configuration and we can spot the whole red and black aesthetics across the motherboard. Storage options include 6 SATA III ports while expansion slots include two PCI-e 4.0 x16 (x16/x8 electrical), three PCI-e 4.0 x1 and two M.2 slots. 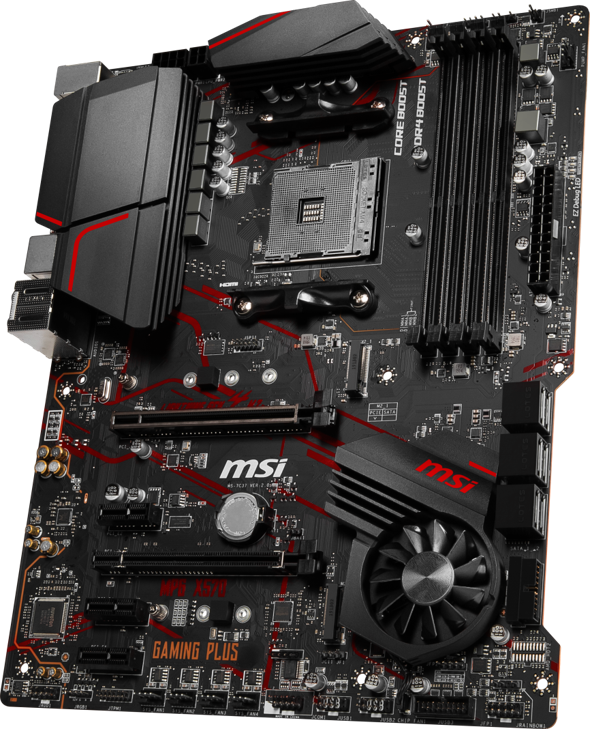 The motherboard also features the active fan cooling on the PCH heatsink which looks to be of the same design as MSI's Twin Frozr series graphics cards.

The MSI Gaming Plus (X470) was priced under $140 US so we can see that even the entry-level X570 boards require active PCH cooling which could highlight slightly higher thermals than the existing X470 and X370 PCH.