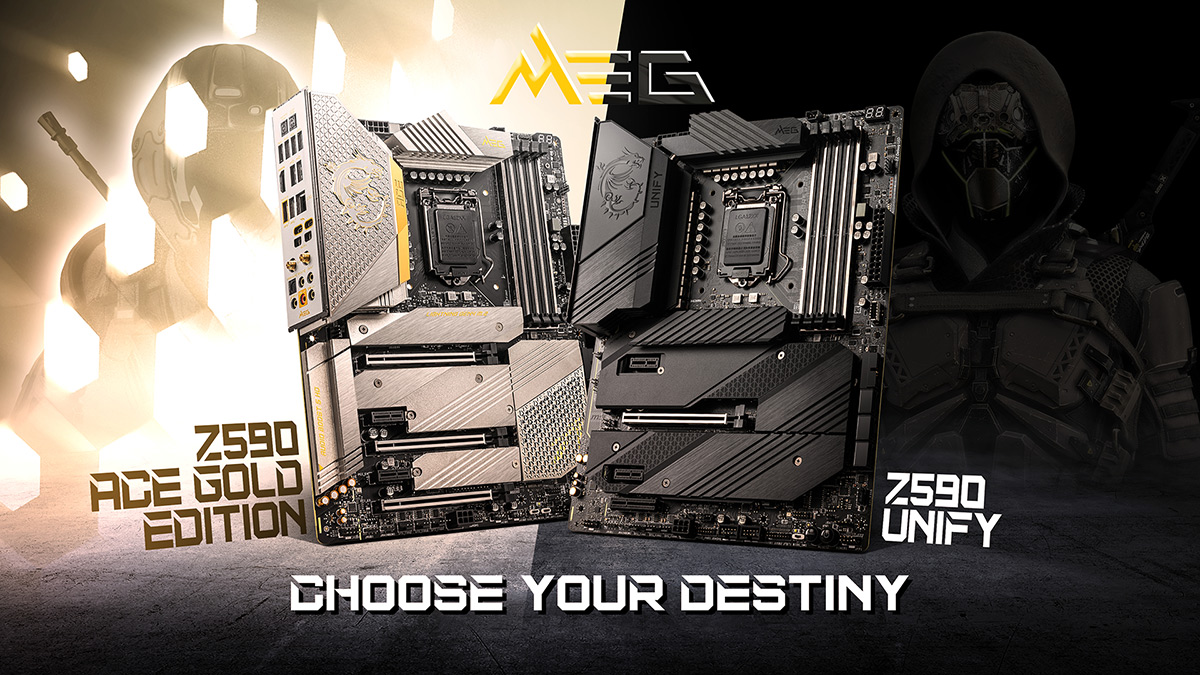 The MSI MEG Z590 ACE Gold Edition motherboard features an eye-catching design with gold and silver accents. The motherboard features a direct 19 Phase all-digital VRM with 90 Amp Smart Power Stages all powered through a dual 8-pin connector configuration. The PCB is an 8 Layer PCB with 2oz Thickened Copper and up to DDR4-5600(OC) MHz memory. On top of the excellent overclocking capabilities, it also features great connectivity with dual Thunderbolt 4 ports and 4 M.2 slots.

The design of the MSI MEG Z590 ACE Gold Edition is a showstopper and MSI has even gone as far as to feature a genuine 24K-gold foil heatsink. Some of the platinum-colored parts feature a chain mail-like design. The design certainly may not be for everyone as it may feature a little too much gold for those looking to be a little more subtle, but that is where the MEG Z590 Unify comes in with an all-black design. It is a more sleek and subtle board.

The MSI MEG Z590 Unify motherboard also has a little brother designed for overclocking in the Unify-X model. Both share a VRM Mirrored Power Arrangement with a total of 16+2+1 Phases with 90A Smart Power Stages and a Titanium choke III. The Unify-X model features 2 DIMM slots for overclocking and has even been used to break the memory clock world record pushing DDR4 speeds to an incredible 7200MHz. Similar to the MEG Z590 ACE, the Unify features quadruple M.2 connectors.

The MSI MEG Z590 ACE Gold Edition and the MEG Z590 Unify/Unify-X are both premium motherboards tailored to people with different tastes in aesthetics, but both will certainly feature a premium price tag as the standard edition of the MEG Z590 ACE is listed for $500 US over at Newegg.

antOnline Is Hosting A Giveaway For The Intel Rocket Lake Core i9-11900K CPU, Open Until Midnight