With the Moto 360 getting a September 4th launch date officially, very soon we'll be able to lay our hands on Motorola's highly anticipated smartwatch. Courtesy of various leaks around the internet, we've been able to learn quite a few details about the Moto 360. The Moto 360 will be manufactured from stainless steel, will feature an ambient light sensor, an impressive battery   and will also be the first Android Wear device to feature a heart rate sensor.

As the launch date draws nearer, now we can finally get a complete picture of the Moto 360 which includes its price. The Moto 360 has been listed on Best Buy for pre-order and the listing confirms several of the rumors and leaks we've seen so far. Starting with the price, Best Buy has listed the Moto 360 for a price tag of $249. This is a price which had been earlier speculated for the device, but denied by Motorola. 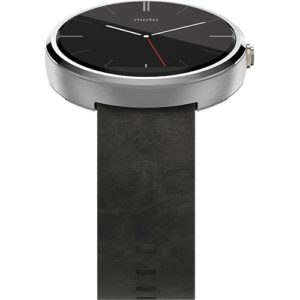 Best Buy's listing gives an almost complete coverage of the device's specifications. The Moto 360 will come with a Texas Instruments process. It will be compatible with devices running on Android 4.3 and later like all the Android Wear devices out there. Heart rate, ambient light sensors and a pedomter for the device also seem to be confirmed.

Coming towards the design specifications of the Moto 360, the device 1.8 x 1.8 x 0.4 inches for height, width and depth. It will come with a plastic back case, a stainless steel design with the leather strap.It will also be waterproof for up to 30 minutes under a depth of 3 feet.