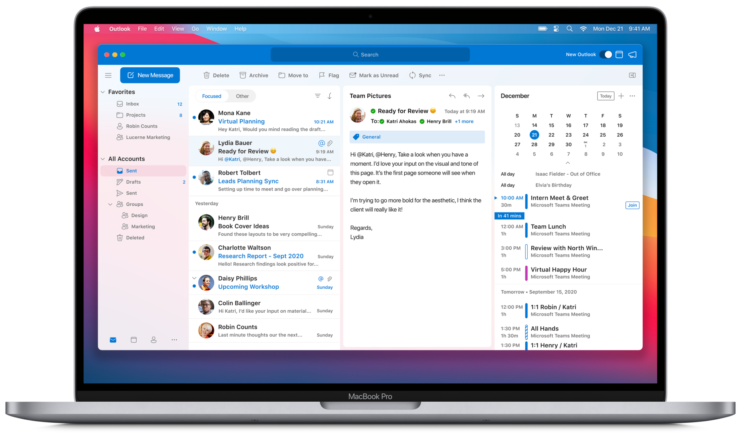 The good news for today is that the support for Apple silicon is moving forward, with Microsoft also joining the long list of developers who have already pledged and added support for the latest silicon, as well. Microsoft Office apps are now fully supported for the new M1-powered MacBooks, so you should not really have any problems running these apps natively.

The company has gone ahead and introduced a lot of different changes in their major announcement. The changes are rolling out today, and with these changes, apps such as Outlook, Word, Excel, PowerPoint, and OneNote for the Mac are all now optimized for Apple's M1 chip. Not just that, the apps have also been redesigned with macOS Big Sur's design guidelines, and there's more.

As per Microsoft, users will be able to notice major performance improvements when they use the Office apps on M1 Macs; the Office apps are Universal, which means that the latest update will also have them running on the Intel Macs. This is what the company had to say.

We are excited to announce that starting today we are releasing new versions of many of our Microsoft 365 for Mac apps that run natively on Macs with M1. This means that now our core flagship Office apps—Outlook, Word, Excel, PowerPoint, and OneNote—will run faster and take full advantage of the performance improvements on new Macs, making you even more productive on the latest MacBook Air, 13-inch MacBook Pro, and Mac mini.

In addition to that, Microsoft will go ahead and make a noticeable change to Outlook for Mac today. It will bring support for iCloud accounts for the first time since launch. This means that you can add your iCloud account to Outlook and keep it with your other accounts. The feature will start rolling out today.

We continue to learn how customers want to use our products through continued feedback. So, thank you to each and every one of you who have shared your experiences with us. Today we are pleased to announce support for iCloud accounts in the new Outlook for Mac. This will enable you to organize work and personal emails, contacts, and calendars together in one app so it is easier for you to stay connected to what matters. We will start to roll this out using the new Outlook for Mac in the coming weeks.

This is certainly a step in the right direction as M1 MacBooks are finally catching traction, so we expect to see more and more developers following suit. You can read the full list of changes here.