Mass Effect Andromeda gameplay has been leaked online which shows various gameplay elements alongside visual effects in the game. Please note that this footage may contain spoilers. 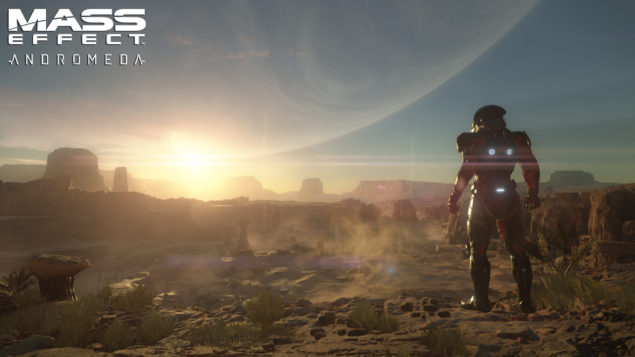 The footage was uploaded to YouTube, but has since been taken down by EA due to a copyright claim. Luckily, the video was cached by Google. Additionally, some mirrors have already surfaced. This footage does not belong to us, and we're merely providing a link to the video.

The leaked footage seems to be an early build from 2014, but shows off several gameplay elements, including the use of a jetpack in order to reach higher grounds. Furthermore, pollen plumes are used to incapacitate a player. Additionally, the footage shows of some in-game effects such as ambient flame bursts, fog elements, rain impacts, impact of meteorite, and FumeFX.

The HUD shown in the footage is in line with the HUD that was teased by the game's former development director, Chris Wynn, back in November of 2015.

We hope that you can join us on this journey… #N7Day pic.twitter.com/2cEMmVyd5f

Mass Effect Andromeda was officially announced during the E3 of this year. Developer Bioware released a trailer in which the official title for the game was announced.

” While we aren’t ready to go into too many details just yet, as you saw in the trailer and can tell by the name, this game is very much a new adventure, taking place far away from and long after the events of the original trilogy. You will play a human, male or female, though that’s actually not the character you saw in the trailer (more on that later). You’ll be exploring an all-new galaxy, Andromeda, and piloting the new and improved Mako you saw. And through it all, you will have a new team of adventurers to work with, learn from, fight alongside of, and fall in love with”, said studio manager Aaryn Flynn, following the announcement trailer.

Mass Effect Andromeda is expected to be released in the 1st quarter of 2017 for PC, Xbox One, and PS4.

Mass Effect Andromeda Subquests Will Be “Meaningful”, Inspired By The Witcher Series; Planets Will Have Rich Backstories