No Lights On for iPhone 6 Back Cover Logo!

So half of the rumors and analysis that we dwelled so dearly upon for all of the last few months are going in to trash in these last two weeks preceding the finale release of the iPhone 6. Facing the onslaught of the tons of iPhone 6 leaks and news and sifting through the items that go directly to the bin against those which stay with a pinch of salt was a mammoth task. What is happening this week though is tremendous as we don't think if we have ever seen this many of the leaked images and rumor vs anti-rumor mill circling the same components of a smartphone.

Following the iPhone 6 front panel image, a beautiful retail box leaked shot, and another component leaked image of the True Tone flash module, here is another news bit coming under the iPhone 6 belt today. If you remember, we had shared with you a rumor that Apple may be considering to have lit-up iPhone 6 logo - similar to that of Macs. This logo was supposed to light up for notifications and work as a helpful reminder to the consumers in case of any new mail, message, or a missed call among other various possibilities.

As was expected then too, today comes the confirmation that there will be no lights for this year's iPhone 6. No glowing for the iPhone 6 logo sadly! This confirmation comes from a leaked image (yep - way too many paparazzi surrounding one poor smartphone!) that shows Apple logos in a tray of assembly line showing no signs of getting any glow. Here is the Apple's iPhone 6 logo image as taken from a factory: 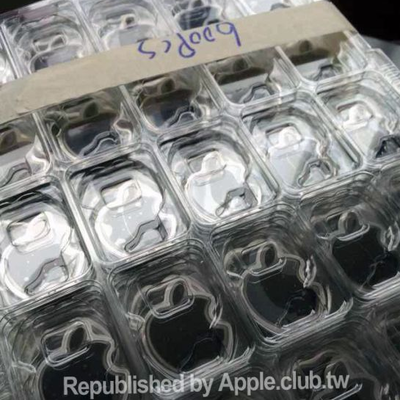