With Samsung starting to sell its Galaxy S6 and Galaxy S6 edge today, we are perhaps only left with LG G4 and Sony Xperia Z4 when it comes Android flagship smartphones of the year. In the previous weeks, especially after S6 duo's launch, there have been an increasing number of leaks and device renders of LG G4 and the Xperia Z4. However, today may be the first time we are seeing these two smartphones showing up on the GFXBench GPU benchmark test. You will also find a rumor roundup of the expected specs of both these Android smartphones.

The latest benchmarks show the LG G4 and Sony Xperia Z4 on the GFXBench Manhattan 3.1 GPU benchmark test. The test is specifically designed to get the frame per second rate of the smartphone's GPU unit. As you can see in the image shared below, Sony Xperia Z4 benchmark reveals a score of 1115 frames at 18 fps rate. Sony Xperia Z4 (model E6553) flaunts industry leading Adreno 430 GPU according to this test - a claim quite coherent with earlier leaks. 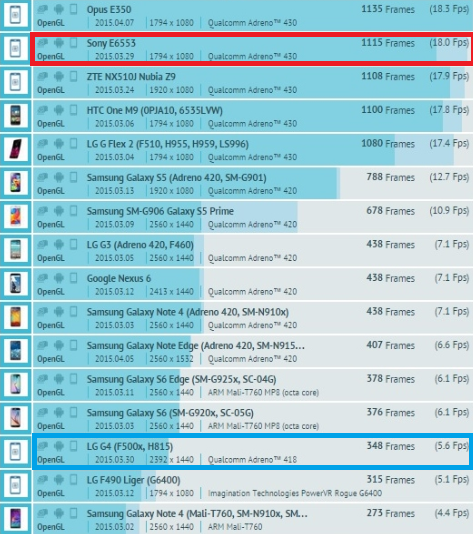 Here are the LG G4 highlights: