It'll be a week soon since Apple updated the iPhones featuring a new chip that builds on last year's A12. Apple's built a strong foundation with its mobile SoCs and larger variants of the iPhones' processors also end up on the iPad due to this base. Naturally, this also allows the silicon to compete on its own with Samsung's Exynos and Qualcomm's Snapdragon processors.

Within a couple of days following the iPhone 11 lineup's launch, we witnessed a flurry of benchmarks surface on GeekBench and Antutu. These were accompanied by worrying concerns that the devices are limited to 4GB RAM. Now, in order to make early estimates of how the iPhone 11, iPhone 11 Pro and iPhone 11 Pro Max stack up against current Android flagships, we've decided to compare the iOS devices' benchmarks to their Android counterparts.

Take a look below for more details.

Samsung, just like Apple, has a lot of resources to invest in smartphone development. This has led to the company catching up to and surpassing the Cupertino tech giant when it comes to aesthetics. Apple's iPhones 11 follow the design form debuted by the company on the iPhone X -  two years back, while Samsung has introduced a new design language with the Galaxies Note 10.

Now, with the new iPhones out, we've got GeekBench and Antutu scores to compare them with the Notes, and we'll start by pitting the iPhone 11 Pro Max against the Galaxy Note 10 Plus. Fresh after an iPhone launch, GeekBench sees a handful of scores surface that aren't referenced by the smartphones' marketing name. To lookup the iPhone 11 Pro Max on GeekBench, you'd have to search using iPhone 12,5 or D431AP, with the latter referring to the smartphone's motherboard.

The scores for both GeekBench and Antutu show a lead for the new iPhone. However, we're still waiting for detailed Antutu scores for the smartphone which segregate performance according to GPU, Memory, UI and other parameters. In GeekBench the A13 powering 2019's iPhones widens the lead over the Snapdragon 855 evenly in single and multi-core tests. 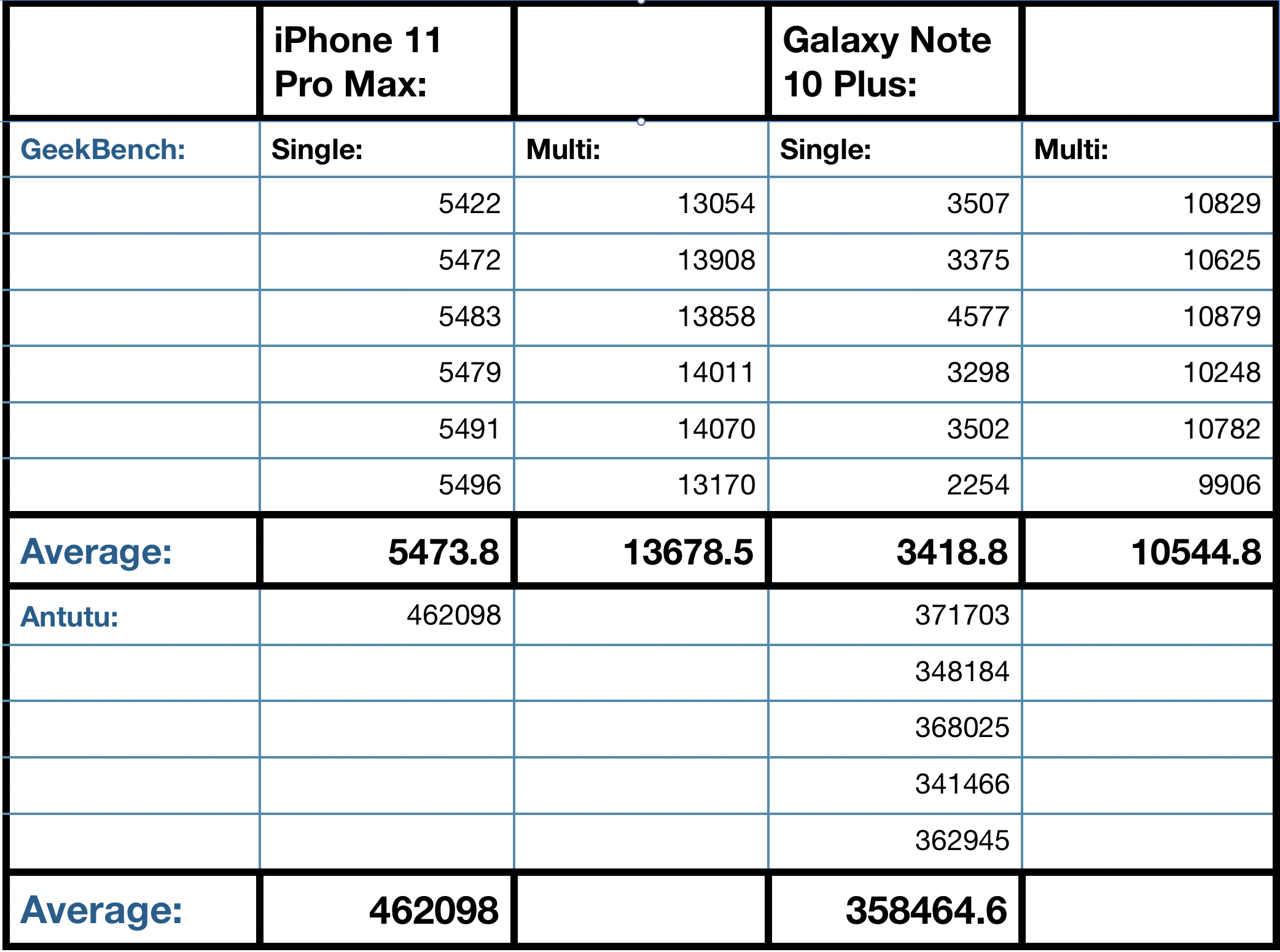 Scores of the iPhone XS Max powered by the A12 aggregate to 4813 in single and 11381 in multi-core testing. Now, the iPhone 11 Pro manages to gain 2054 points over the Note 10 Plus in single-core performance. In multi-core, the smartphone has a 2297 point lead over its predecessor. This is a good gain, but since the A13's true competitor will be Qualcomm's next Snapdragon chipset, this comparison isn't really oranges to oranges.

In addition to GeekBench, Antutu's Weibo account also shared benchmarks for the three iPhones a week back. Going by a single score for the iPhone 11 Pro Max, it appears that the true performance gains made by the A13 are in areas other than the CPU. While the iPhone XS Max loses out to the Note 10 Plus in Antutu aggregates, the iPhone 11 Pro Max has a 103,633 point lead.

Apple's GPU present on the A12 loses to the Snapdragon 855's Adreno 640 GPU, and we're interested to see if the A13 gains over the 855 in CPU or in the GPU. Inferring this from the gains made in GeekBench, the A13's gains can go either way. More on this below. 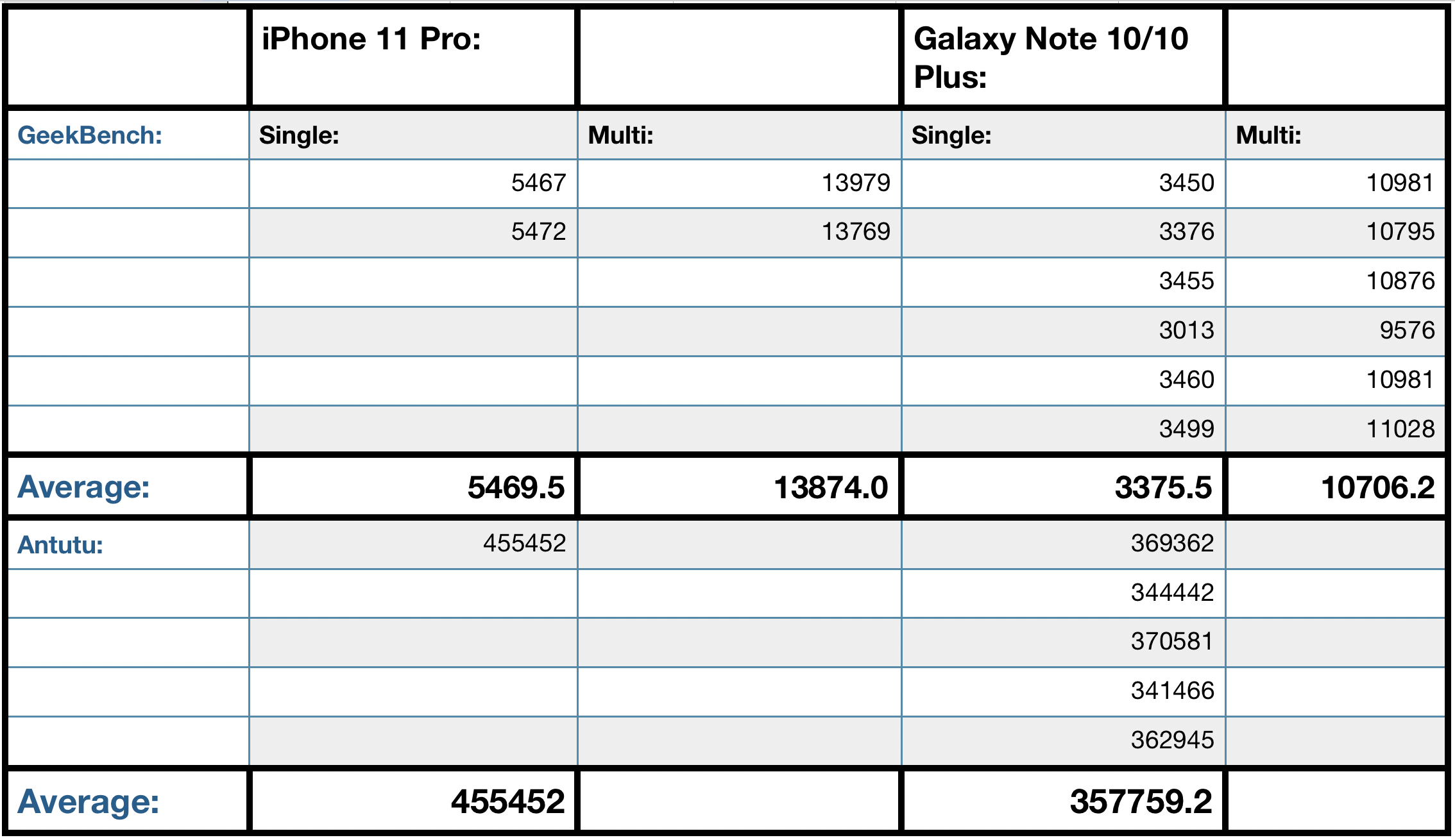 In Antutu, the iPhone once again leads by approximately 100,000 points, and according to the note shared on Antutu's Weibo account, GPU performance witnesses the strongest gain this year. If this is true, then Apple will have matched the Adreno 640 with the A13's GPU, and whether the San Diego chip giant Qualcomm will catch up with the next Snapdragon is unknown. However, given Qualcomm's strong GPU designs, it's naive to count the company out of the picture.

Based on a hunch, it is possible that the 2019 Snapdragon maintains the lineup's graphics performance over Apple's An chips. We'll also be in a better position to compare the Snapdragon 855 and A13's GPU performance after graphics-only tests of the iPhones 11 lineup are avalaible. 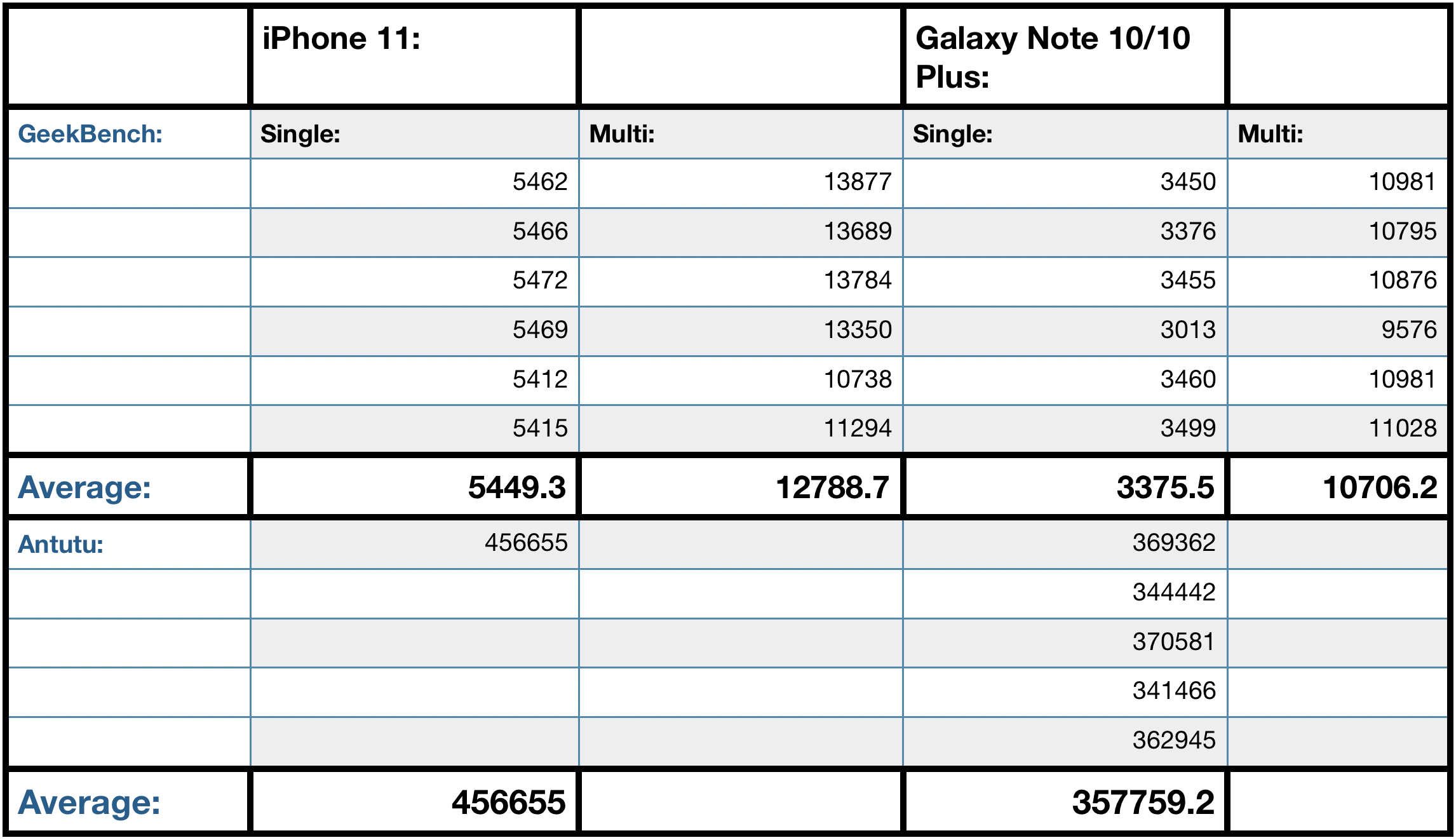 Concluding by taking a look at how the iPhone 11 takes on GeekBench and Antutu, it's clear that Apple has ensured that the three 2019 iPhones perform similarly. The iPhone 11 gains 1GB RAM over its predecessor, and despite the two OLED iPhones having the 'Pro' moniker, they've got 4GB RAM each, suggest both GeekBench and Antutu.

Judging by this, Apple believes that camera sensors and display materials are sufficient to ensure that a gadget tailors to professionals. We'd disagree with the company, but at this point, ensuring that an LCD iPhone falls into the same category as OLED ones is more important to Apple than ensuring its devices are equipped with what they market.

Finally, while these are only initial performance comparisons of Apple's 2019 iPhones with the Galaxies Note 10, we've also compared the Galaxy Note 10 Plus to the iPhone 11 Pro Max here. So take a look if you're interested and let us know what you think in the comments section below.