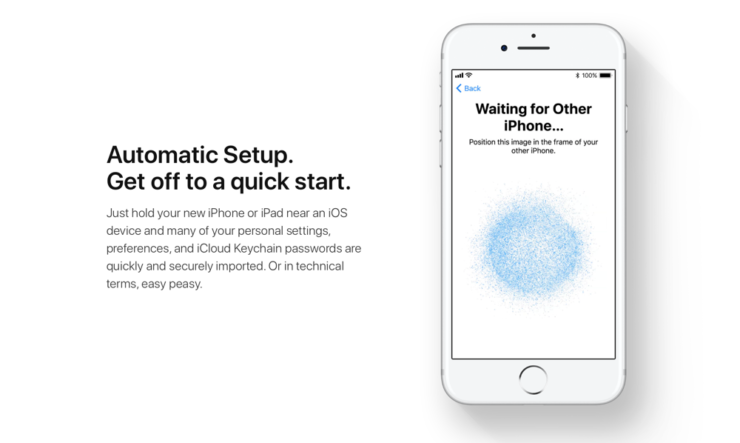 iOS 11 comes with a brand new 'Automatic Setup' feature. Using it, you can set up a brand new iPhone or iPad in a breeze. Here's how it works.

Setting up a new device might sound exciting but there's a lot of pain one has to endure in order to get all those accounts up and running. With iOS 11, things are a tad bit easier. See, if you buy a new iPhone or iPad running iOS 11, simply bring it close to your older device that is signed in with your Apple ID along with Bluetooth and WiFi turned on. iOS 11 will ask you to pair the two devices together (which is easy by the way), and things are taken off from there. Once done, your Apple ID, settings, iCloud Keychain passwords and more are securely imported to the new device.

Here's a video demo of how the feature works, courtesy of MacRumors.

For those unaware, a similar method of setting up is currently available if you bought a brand new Apple TV 4. But of course, the method which is implemented in iOS 11 is far more polished and takes a lot of cues from the AirPods and the Apple Watch style of scanning an on-screen code.

Since this setup method requires you to have an iOS device already, therefore it's fairly obvious that this feature is aimed towards those who are well invested into the iOS ecosystem. Even if you are not, it's a great tactic from Apple's part to lure in people by showing everyone how well their devices interact with each other. It's totally up to the user's call if he falls for that marketing move though.