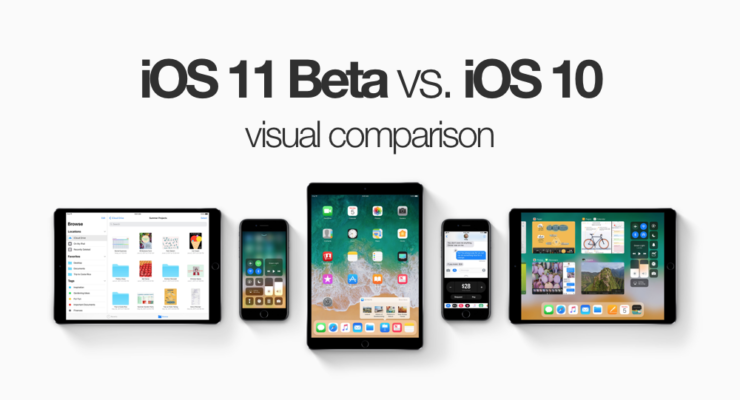 We've compared iOS 11 Beta to Android O Developer Preview already. But how does iOS 11 Beta fare against its elder brother, iOS 10, visually? Today, we're gonna do just that, in a quick visual comparison between iOS 11 Beta and iOS 10.

Android O Developer Preview and iOS 11 Beta are miles apart when you visually compare the two together. Both operating systems have their unique design languages and way of handling things as well. But how does iOS 11 Beta compare to iOS 10, its bigger brother, that's currently available to the public currently? Well, we went ahead and took a bunch of screenshots, and compared certain aspects of the OS. We ended up with a gallery that compares the corresponding features of iOS 11 Beta with iOS 10. The results? Well, see for yourself.

The screenshot on the left belongs to iOS 10, while the one on the right comes from iOS 11 Beta.

In certain places the differences are almost negligible. But a drastic change can be seen in others. For instance, Apple has used a bolder font throughout the OS for better readability. But that's not all, a larger typeface has also been thrown into the mix in certain places. This ensures that the user knows exactly where he or she is at any given time.

When it comes to features, iOS 11 Beta is without a doubt miles ahead of iOS 10. Apple has managed to outdone itself yet again in this department and things will only improve down the line. Also, keep in mind that we are currently sitting on the first beta release of iOS 11, this means that things will change when the OS hits final download channels later in the Fall.

What do you think about iOS 11 Beta? Do you think it looks better compared to iOS 10? Let us know in the comments section below.