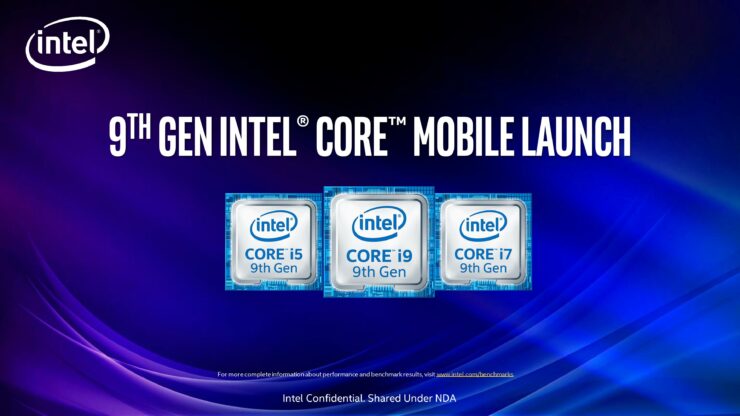 Intel has unleashed the full lineup of its 9th generation mobility H-series processors and it's clear that the company isn't holding back any punches. The lineup is headed by the Core i9-9980HK, which is an 8-Core/16-Threads part and has a turbo boost of 5GHz with a configurable TDP of 45W only. This is nothing short of impressive and the maturity of their 14nm process clearly shows.

The new Intel 9th generation mobility processors will be powered by the 300-series mobile chipset and will feature plenty of new tech. Intel Wi-Fi 6 is now supported along with Intel Optane memory H10. Intel's high capacity Intel SSD 660p is also supported as well as a total DIMM capacity of 128GB DDR4 - which is great for anyone going the creator or mobile workstation route. The H-series lineup targets the enthusiast category, all the way from content creation, gaming and to people who just like fast machines.

Intel's thermal velocity boost technology is what essentially allows the top tier processors to achieve clock rates as high as 5GHz. Depending on the current operating temperature of the processor and how much cooling and power is available in the specific laptop, the CPU will automatically boost over the standard turbo boost till the parameters no longer remain opportunistic. What this essentially means is that unless you have one of those beast-of-a-liquid-cooled-laptops or workstation type builds, this clock rate will not be sustained.

Intel also seems to have found a niche capability with Optane memory which can act as a sort of smart cache drive for the SSD. Intel claims that the memory can open large media files 63% faster than a traditional TLC based SSD and will load gaming levels 129% faster than a standard SSD. The support for Wifi 6 also reduces latency by up to 75% and can offer nearly 3x speedier downloads. All H-series processors have 2 channels of DDR4-2666 MHz DIMMs which when combined with support for 128 Gigs of RAM means each channel can support up to 64GB each.

The lineup consists of quad-core, hexa-core and octa-core parts, divided into Core i5s, Core i7s and Core i9s. Only the Core i9s have access to thermal velocity boost and only the Core i9-9980HK has an unlocked multiplier. The mainstream high-end processor is now the Core i7-9850H which can boost up to 4.6GHz and also has a partially unlocked multiplier. This is followed by the Core i7-9750H. Both processors are hexa-core dies with hyperthreading enabled. Finally, you have the quad-core dies: the Intel Core i5-9400H and what I assume will be the entry-level choice: the Core i5-9300H.

The company also had the usual flurry of 1st party performance comparison against a 3-year-old system: up to 56% faster performance in gaming with up to 54% faster 4K video editing.