This year turned out to be full of surprises within the hardware industry. AMD made a huge comeback with their Ryzen series of processors, Intel upped the number of cores on their mainstream and high end lineup and NVIDIA's GTX 1080 Ti and 1070 Ti made sure that green team remained at the top of the graphics throne. During all the launches, Intel and AMD released the most powerful desktop processors to date and both have been honored with the CES 2018 Innovation Award.

Remember that just earlier this year, Intel launched Kaby Lake-S desktop processors that still used a four core implementation. With AMD, everyone who had a good knowledge of their previous PC desktop offerings knew that the red team was going to offer at least an 8 core part and Intel was caught with their pants down when Ryzen launched, almost matching the IPC of Intel's latest uArch.

Ryzen processors were met with a great response, mainly due to their disruptive price to performance figures in the mainstream market. Intel did move forward their desktop roadmaps to remain competitive in the market but Ryzen wasn't the end of Intel's worries. Soon after Ryzen, just when Intel was on the verge of launching their X299 HEDT platform, AMD announced their own counter product, the X399 HEDT platform for Ryzen Threadripper processors. Featuring a behemoth 16 core 1950X chip for just $999 US. 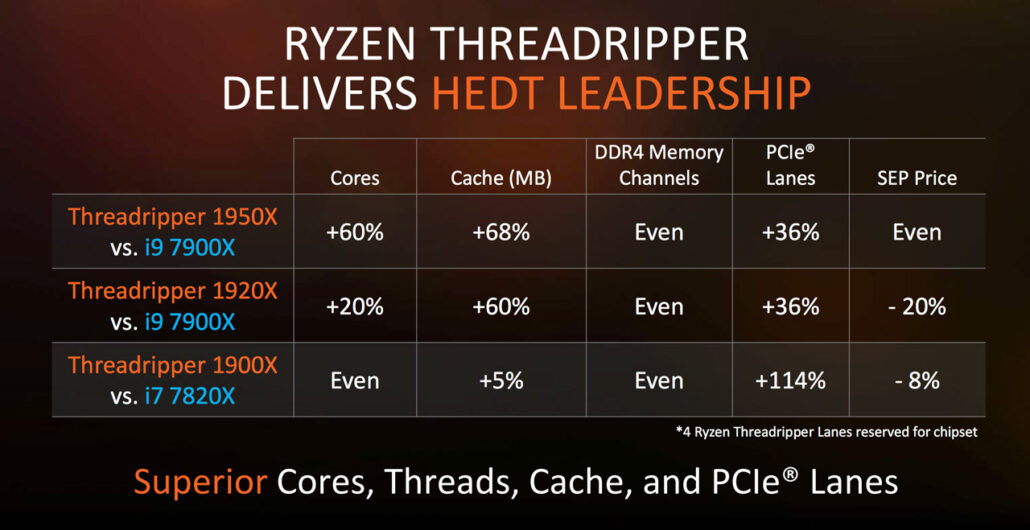 As such, Intel who were reluctant to launch anything above 10 cores in their Skylake-X family, termed 'Core-X' went from releasing a 12 core chip all the way up to 18 cores. Oh and I may forget to mention this later, Intel also increased the core count on their mainstream chips to six. This was the first mainstream core count increase since the Core family was introduced. A direct result of Ryzen's success or just a late coming on Intel's part? We shall never know the exact details but it's definitely a bit of both. That's the desktop processor market in 2017 for you!

But the story for today is a slightly different one. Intel and AMD are actively competing in the desktop market after years of slowdown in the industry. This had led to great products for consumers and two of those have been honored with the best innovations of CES 2018 award. These include the mighty Intel Core i9-7980XE processor and the AMD Ryzen Threadripper 1950X.

Let's talk about the Ryzen Threadripper 1950X first, a 16 core, 32 thread chip with 64 PCIe lanes, 32 MB of L3 cache and an amazing price of just $999 US, this processor hits all the marks of a great high-performance processor. It has just around half the price of the Intel equivalent 16 core part while delivering robust performance and efficiency that to this day remains unmatched.

“The overwhelmingly positive response from enthusiasts and expert reviewers that greeted the release of AMD Ryzen Threadripper already served as a huge reward for the AMD whole engineering team who built this ground-breaking product,” said AMD Chief Marketing Officer John Taylor. “Now, with its selection as a CES 2018 Best of Innovation Award winner, Ryzen Threadripper achieves a special standing and place of leadership in the incredible history of processor innovation.”  via AMD

On the other hand, Intel showed AMD that they won't go without a fight. The result? An 18 core juggernaut known as the Core i9-7980 Extreme Edition. This is the ultimate chip for users who require the best multi-core/thread performance in their PCs. And for a price of $2000 US, this processor screams ultra enthusiast. It's the fastest chip in the world and one that has broken countless records.

It is evident that the more competitive the industry remains, the more better products consumers can expect for themselves. We hope that the years ahead will bring even more amazing products for consumers, whether mainstream or enthusiast, so that they can have the best possible desktop performance to hand.