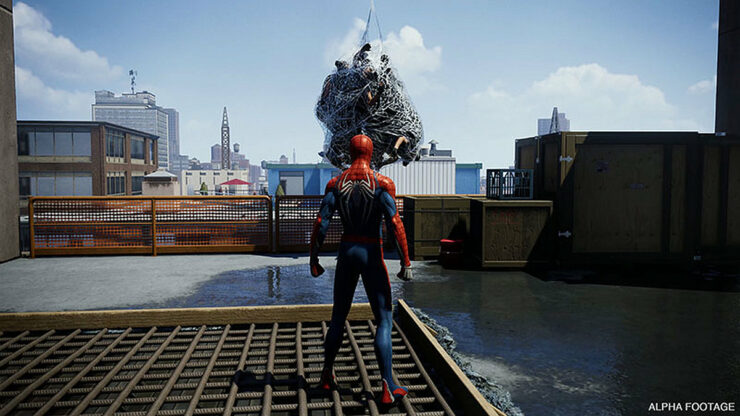 As part of the ongoing Game Informer coverage, Insomniac shared new details about the gadgets Peter Parker will have at its disposal in the upcoming PlayStation 4 exclusive Spider-Man game, due to launch on September 7th. We also learned the first concrete details about side content.

As for the gadgets, Insomniac showed three of them in action. The first one is the Tripwire, which players could place on a wall to catch a nearby enemy in a web or just attach it to an enemy as showcased in the GIF below, in which case the nearest enemy will be pulled towards his partner.

The second gadget revealed was the Web Bomb. This is a grenade of sorts which explodes and sends out webs to all nearby enemies, stopping them where they are so that Spider-Man can dispose of them more easily. The Web Bomb can be upgraded in order to ensure the webs will be active for longer.

Last but not least (for this reveal, more gadgets will be in the final game), the so-called Spider Drone will shoot out webs which once again can be helpful for crowd control as well as distracting foes. The drone is set to be available as a pre-order bonus, though the folks at Insomniac clarified that all pre-order gadgets can also be acquired in the game by those who won't pre-order Spider-Man.

The article also dives into something that's been a bit of a taboo so far for the developers: side content. Now they've confirmed a series of activities ranging from the everyday robberies in NYC to Mister Negative's Inner Demons causing mischief, 'stakeouts' with Black Cat, a series of missions featuring Task Master, taking down Wilson Fisk bases all over the city, and a series of investigation missions prompted by Peter's friend Harry Osbourne (who'll be out of the country during the game). Players may also find Peter's own backpacks scattered around the city and these will contain audio logs of what happened to him from the day he became the Spider-Man (roughly eight years before the beginning of the game). Again, there will be more side activities in the final game though understandably Insomniac wants to keep some of them under wraps.