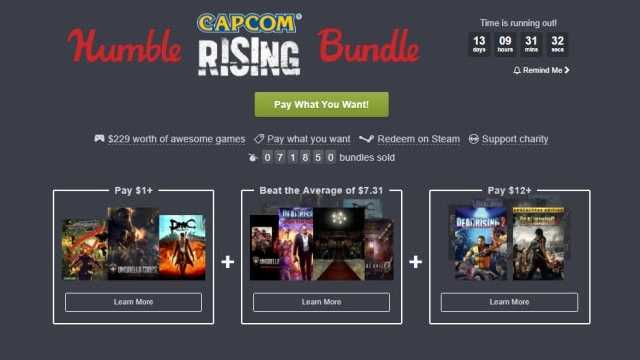 Humble Bundle has launched a new package called Capcom Rising Bundle and games obviously focused on the house of Osaka. Among the titles included we can find Strider, DmC - Devil May Cry, Dead Rising 3 and Resident Evil 6.

Do you love Capcom games, but lack a few of them in your library? This Humble Bundle might be just for you, as it has gone live with a new bundle entirely dedicated to titles published by the renowned publishers.

Steam sales may be over, but that's not a reason for good plans to stop. Especially when this can help a good cause. So, for about two weeks now the Humble Store will host this Humble Capcom Rising Bundle which, as its name suggests, offers several games from the publisher at low prices and reverses some of the profits to a charity.

Capcom has presented the Humble Bundle Rising Capcom, publisher of a collection of games available through its well-known formula of the Humble Bundle (that is, you pay for what you want), including offers on titles of some of the most famous sagas of the house of Osaka, from  Resident Evil to  Dead Rising.

At a minimum price of one US dollar, you can take home the 2013 class action DmC: Devil May Cry, the online shooter Umbrella Corps and the side-scroller Strider.

Finally, by making a donation of Twelve dollars it will be possible to download Dead Rising 2 and Dead Rising 3 Apocalypse Edition, in addition to all the titles mentioned above.

The Humble Capcom Rising Bundle will be available until July 25, for full details you can click here.