With the release of HTC One M9 and its larger screen variant, One M9+, HTC has announced another smartphone that possesses the best features from each of the aforementioned devices and in the process, has announced its Butterfly J (HTV31). Unfortunately for those living outside the boundaries of Japan, you will not be able to get your hands on this device because it is going to be sold exclusively by one of Japan's major carriers. According to KDDI, Butterfly J is packed with impressive hardware specifications, and while Snapdragon 810 is known for its processing power, its overheating issues have still not been addressed by Qualcomm. 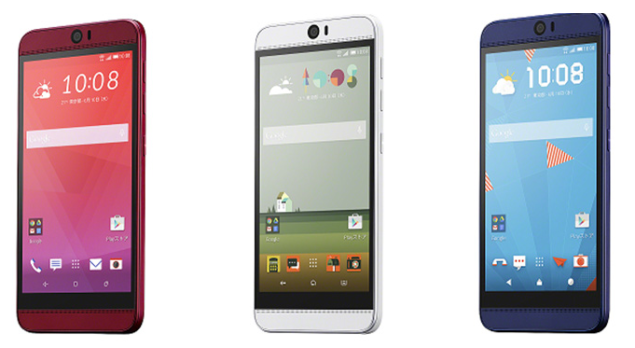 While we were hoping to see something else besides Snapdragon 810, the remainder of the hardware specifications are quite impressive. Starting off, Butterfly J features a 5.2 inch screen that is radiating a QHD display (or in other words a resolution measuring 2560 by 1440 pixels). In addition, the handset is armed to the teeth with camera sensors. In addition to featuring a 20 MP rear camera sensor, selfie aficionados are going to have the time of their lives with smartphone’s 13 MP front shooter. Butterfly J is following the same suit as HTC’s Desire Eye, which has also been targeted to the selfie centric.

Moving on, the powerful handset features 3 GB of RAM, 32 GB of on-board storage, which is expandable to a limit of 32 GB. The disappointing aspect of Butterfly J was its 2,700 mAh battery. Since One M9 features a 2,840 mAh battery, the least that HTC could have done was incorporate a larger ‘electron juice box’. As for the operating system, the smartphone will be running Android 5.0 Lollipop right out of the box, with HTC's Sense 7 UI running atop. For connectivity purposes, an LTE Cat 6 modem and an 802.11 ac wireless adapter have been provided.

While we do acknowledge the processing capabilities of Qualcomm’s flagship chipset, its overheating and eventual thermal throttling has been met with severe negative reviews. Qualcomm was forced to roll out several revisions, with the latest one present in Xiaomi Mi Note Pro (v1.3). With this version, Qualcomm would have thought that its biggest problem had finally been laid to rest. Sadly, it was not meant to be because numerous Mi Note Pro owners have complained that the smartphone still overheats, leading to burnt motherboards, non-responsive of touchscreen and erratic behavior of the display.

If we had the power to remove Snapdragon 810 and place something that does not suffer from temperature spikes, then it would most definitely be MediaTek MT6797. Sadly, it is not in our hands, but in Qualcomm’s alone now.