After keeping the PC gaming community in discomfort for more than a year and a half, Rockstar is finally raking a massive payoff now that remastered version of its last-gen genre-defining open world action-adventure crime epic is selling in millions on PC. While 18 months is a long time to wait for anything, GTA V was certainly more than worth the wait. Although the game is a perfect example of an ideal port, with fluid gameplay and beautifully edged in-game environments, it looks quite like its console counterpart, but in a good way of course. 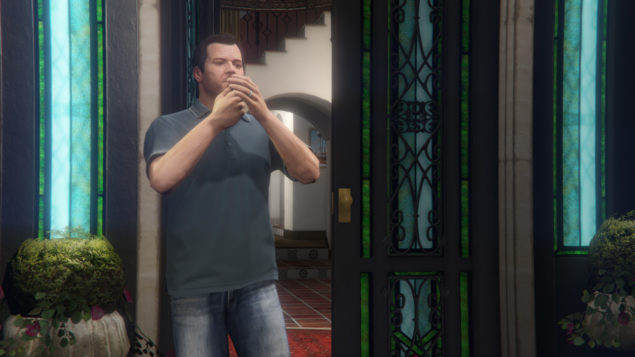 The PC version of Rockstar’s GTA V was expected to be much more glorious than all the previous console versions; and so it is. Beautiful landscapes with refined visual detail, options that allow players to push pixels all the way up to 4K and tweak settings to get the best graphical results, first-person mode with custom field of view, and a tool that allows players to record and edit in-game gameplay footage and upload it directly to YouTube. All that topped with sweet optimization; GTA V indeed is a game to have on PC. However, when running maxed out at 1080p, the difference between the PC and the PlayStation 4 versions of the game are actually pretty less than most fans would expect.

One thing that seemed a bit off balance on the console versions of GTA V was anti-aliasing, but the latest PC version of the game offers several options to adjust that. Being an open world title, the outdoors in-game environments are where players spend most of their time; MSAA here offers improved image quality, however, it does slash the performance on normal hardware. For indoor cutscenes, FXAA does the job. The shadow quality in the PC version of GTA V has also been drastically improved, it greatly enhances the visual appeal of the game, but just like MSAA, it costs you frame rate. There is a very noticeable difference in lighting as well, with PC version having lead most of the times.

The distance scaling slider also increases the level of detail very considerably on the PC version of the game compared to the PlayStation 4 version, but it also consumes a lot of VRAM. Other than that, the game looks pretty much comparable on both the platforms. The foliage in the PlayStation 4 version is roughly the same as the DirectX 11 exclusive grass present in the PC version, and it seems like the in-game textures haven’t been fiddled with much during the port. Ambient Occlusion present in the PC version only offers a bit more the depth to the in-game world. In end, it all just comes resolution flexibility and the 60fps advantage (which indeed is a game changer).

Without further ado, you can check out the screenshot comparison for yourselves below, courtesy of HardcoreGamer. Note that the screenshot that comes first is from the PlayStation 4 version of the game, the one that comes after is from the PC version, which is running at maxed out settings at 1080p in both the “Graphics” and “Advanced Graphics” options (only 4x MSAA, though). For full comparison click here.