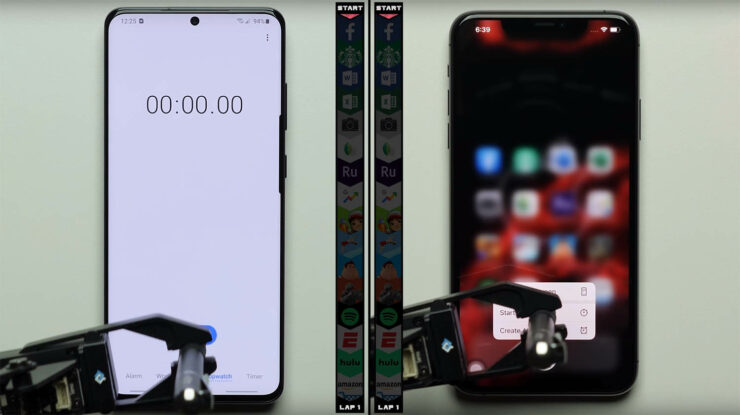 Here are the results nearly all of you have been waiting to see; the Galaxy S20 Ultra vs iPhone 11 Pro Max app speed test was just finished by PhoneBuff, and it has declared a new winner. The contest boiled down to the last few seconds and from what we can gather, if it wasn’t for that whopping 16GB LPPDR5 RAM running in the most decked-out Galaxy S20 Ultra, the iPhone 11 Pro Max would probably have won this race.

Keep in mind that the fully configured Galaxy S20 Ultra features 512GB of UFS 3.0 storage, coupled with 16GB of LPDDR5 RAM. This kind of hardware crammed in a smartphone shows that the Galaxy S20 Ultra is headed towards laptop territory and combine that with the Snapdragon 865, and you have a ‘one of a kind’ Android flagship in your hands.

In the Galaxy S20 Ultra vs iPhone 11 Pro Max app speed test, Apple’s latest and greatest flagship gains the lead by four seconds in the first lap, but its 4GB RAM appeared as the limiting factor. The phablet was unable to keep Microsoft Excel running in the background, along with other apps, showing that the Galaxy S20 Ultra’s 16GB RAM came in very handy this time around. Samsung’s flagship was able to keep the remainder of the applications running, which ultimately caused it to obtain a small lead over the iPhone 11 Pro Max.

Until then, you can view the entire Galaxy S20 Ultra vs iPhone 11 Pro Max app speed test video below and let us know down in the comments on what you thought was the limiting factor for Apple’s flagship.