Samsung has made a habit of giving pre-order bonuses with their Galaxy flagship smartphones ever since the Galaxy S8 was released. Ever since then, the same tradition has continued,  and the same thing is happening with the Galaxy Note 20 series. However, we are not sure if this is going to apply to all markets.

If this leaked voucher is anything to go by, it means that Samsung will be giving away the Galaxy Buds Live as a pre-order bonus with the Note 20 and Note 20 Ultra. However, this leak also confirms that there will not be a Galaxy Note 20 Plus this time around, which might not sit well with many users, more on that letter.

The voucher has been shared by Alvin (@sondesix) who shared a picture showing the pre-order voucher for the Note 20 and Note 20 Ultra. These vouchers are common in many countries, and we have seen these before for older devices, as well. This is what the voucher looks like. 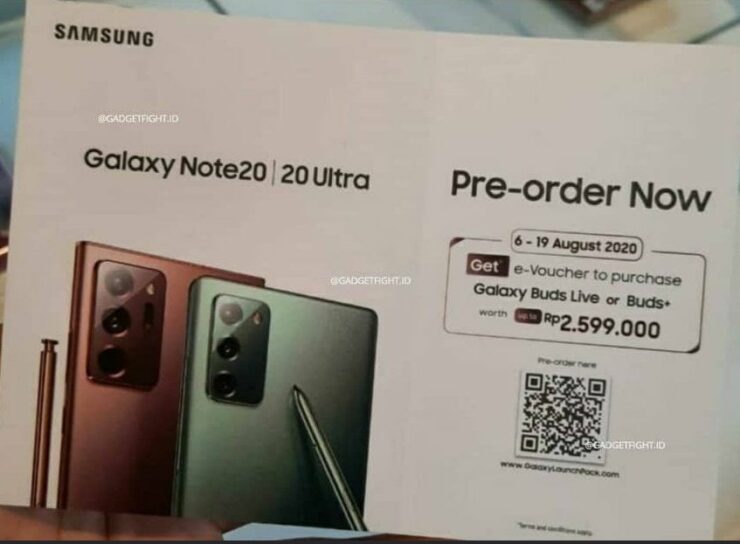 Now the interesting take here is that it seems that there will be no Note 20 Plus this time around. Normally, it would be fine as two devices are more than enough but there is a huge disparity between the price as the Galaxy Note 20 is tipped to cost $999 where as the Note 20 Ultra is tipped to cost $1,400. But it doesn't just end here, the Galaxy Note 20 is said to come with a flat display and a 60Hz refresh rate, along with the Exynos 990 under the hood. Which essentially makes it a phone worse than the Galaxy S20, which runs on a faster refresh rate display, and has a curved display.

Sadly, we cannot confirm or deny more speculations on the devices until the Galaxy Unpacked, but we are looking forward to see if there's any blowback. The Galaxy S20 Plus to date proved to be hte best smartphone in the Galaxy S20 series, being the best of both worlds. The same would have worked for the Note 20 Plus, but it seems Samsung is not interested.