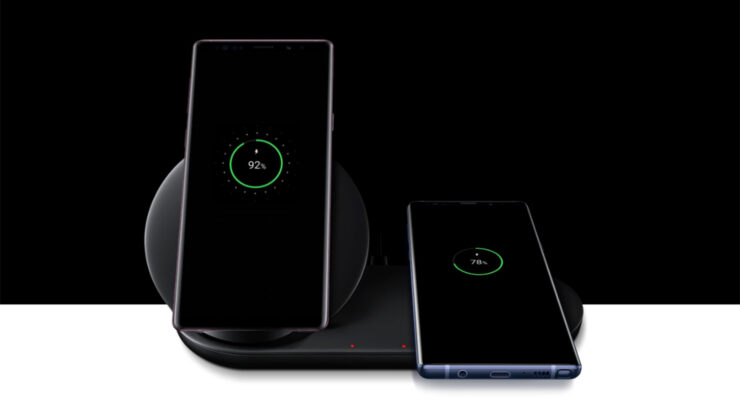 With less than an hour remaining for Samsung to unveil the Galaxy Note 10 and Galaxy Note 10 Plus, it will be excited to see the accessories that will most likely be sold separately since these products are the ones that will unlock your experience when using either or both members of Galaxy Note lineup. One of them happens to be a wireless charging stand, which has been pictured in two colors. We reported about Samsung introducing a high-speed wireless charger before, and given its specifications, it’s quite obvious this accessory won’t be coming cheap.

Roland Quandt, a reporter at WinFuture, and occasional leakster at Twitter has shared two images belonging to Samsung’s 20W wireless charging stand. In the images below, you can see that the Note 10 will be able to get positioned at a slanted angle, meaning that you’ll comfortably be able to check out the notifications while letting the battery reach a 100 percent of charge. According to Quandt, the charger will be actively cooled, suggesting that the accessory could be incorporated with a fan inside.

This is the 20W wireless charging stand for the Samsung Galaxy Note 10. Actively cooled. pic.twitter.com/1j38Ahd4hQ

If he had said in his tweet that the wireless charging stand would be passively cooled, it would mean that there’s a fanless heatsink present in the accessory that’s responsible for dissipating the heat, but that’s not case here. In the second image, you can see small holes at the back for venting out the hot air, along with a charging port given at the bottom. However, what will this product cost you?

To put into perspective, a 45W fast-charger compatible with the Galaxy Note 10 and Galaxy Note 10 Plus was earlier leaked costing $60 when using direct currency conversion. This can mean potential customers wanting to top up the Note 10’s battery using wireless induction might have to invest a triple-figure sum, which is always expensive when purchasing an accessory for a smartphone.

Hopefully, when Samsung opens up pre-orders for its latest and greatest smartphone family, we shouldn’t be surprised if the Korean giant throws in a little extra such as 20W wireless charging stand as a token of appreciation for being an early adopter. Let us wait for the Unpacked event to start and find out more.