When Samsung recalled its first foldable phone after initial negative reviews, it also requested the repair specialist iFixit to take down their review. At that time, the outlet had said that the phone is incapable of preventing dust from damaging the screen. Now that the phone has been launched again after some revisions, iFixit is back with another Galaxy Fold teardown. Does the phone hold up any better this time around? Let’s find out.

After the Galaxy Fold teardown was concluded, iFixit had pointed out that even though Samsung has made some quick changes to make the device sturdier, it still remains pretty fragile. That’s hardly surprising, given the number of cautionary instructions the South Korean giant has given regarding using the phone.

According to the new Galaxy Fold teardown, the phone weighs a bit more than the original version, which can be attributed to the various enforcements and additions. The company has tried to cover as many exposed spots as possible to prevent dirt and debris from entering the phone. The gaping hole in the plastic bezel has been sealed with a protective cover. Moreover, the screen protector is now T-shaped and it is tucked beneath the bezel, and this will hopefully keep the temptation at bay to peel it off. The outlet also claims that just one fold is enough to give the larger inner display of the phone a visible crease.

Galaxy Fold Continues to Have a Problem Keeping Debris Out

All in all, it seems the display is set up to fail and no matter how gently you handle it, you are likely to have one problem or another. As highlighted in the Galaxy Fold teardown, this is probably the reason why Samsung will repair the display for only $149, but just once. That’s not to say that the display has been written off. There a new metal layer that is attached to the back of the display, and hopefully, this will make the screen less prone to breakage.

iFixit notes in the Galaxy Fold teardown that the spine of the phone still has gaps, which can provide an entry point for dirt and debris. Although the handset is not waterproof, Samsung has given some extra protection to the little board inside which houses all the important chips and silicon. The hinges, which had no protection before, are now covered in tape to prevent foreign substances from entering. Lastly, the Galaxy Fold teardown has revealed that while the hinge is well-engineered, it remains to be seen how it will do in a real-life setting. 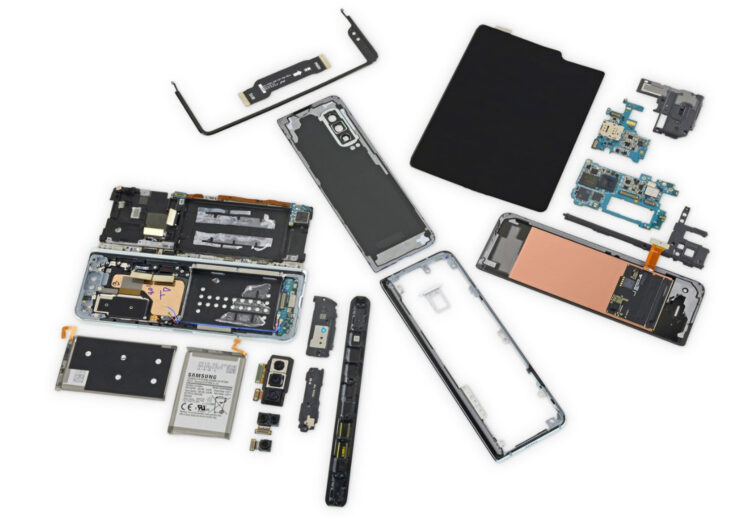 Given that this is Samsung’s first foldable phone ever, it’s easy to understand why it doesn’t have a fail-proof design yet. Over the course of the next few years, we can expect the company to crack the code. Meanwhile, it seems like early adopters do not really care much about the supposed fragility of the phone and it’s doing quite well.