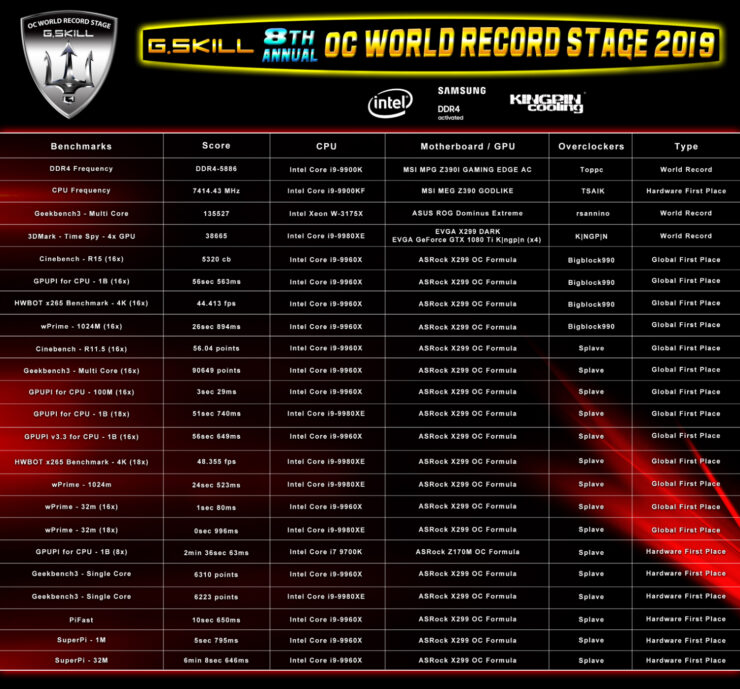 Overclocking professionally has reached a new height and with that such names as Topic have risen. With that, he was able to set a new record of DDR4 speed at 5886 using G.Skill’s own Trident Z Royal DDR4 memory. The setup for it was an MSI MPG Z390I Gaming Edge AC motherboard with an Intel i9-9900K processor. The second place spot was also set at this event by Kovan Yang, using an identical setup. This was a great showing by MSI as well. This record takes the spot previously held by HyperX. Both were using liquid nitrogen as the exotic cooling solution to keep the temperature low.

Kingpin, one of the biggest names in overclocking managed to break a new world record in 3DMark Time Spy with an arrangement of four EVGA GTX 1080 Ti Kingpin cards which are his own brand. He also used the i9-9980XE on the EVGA X299 Dark motherboard, all on liquid nitrogen cooling. The score he managed to achieve was 38,665 with the CPU running at 6.010 GHz and the GPUs at 2,430MHz with a memory clock of 1601MHz.

First Time The Xeon W-3175X Is Used In Pro Overclocking

Another record was set by rsannino using the Xeon W-3175X chip which is a 28-core monster. It was using the Asus ROG Dominos Extreme motherboard. It managed to get a score of 135,527 on Geekbench 3 - Multicore. Other records were set with the ASRock’s X299 OC Formula. The professional overclocker by the name of Splave broke 15 records. At the event, we saw a new record for the newest chip, the i9-9900KF reaching 7.414GHz. That record is still behind the Coffe-Lake i9-9900K chip. The record for the i9-9900K is much higher at 7.613GHz.