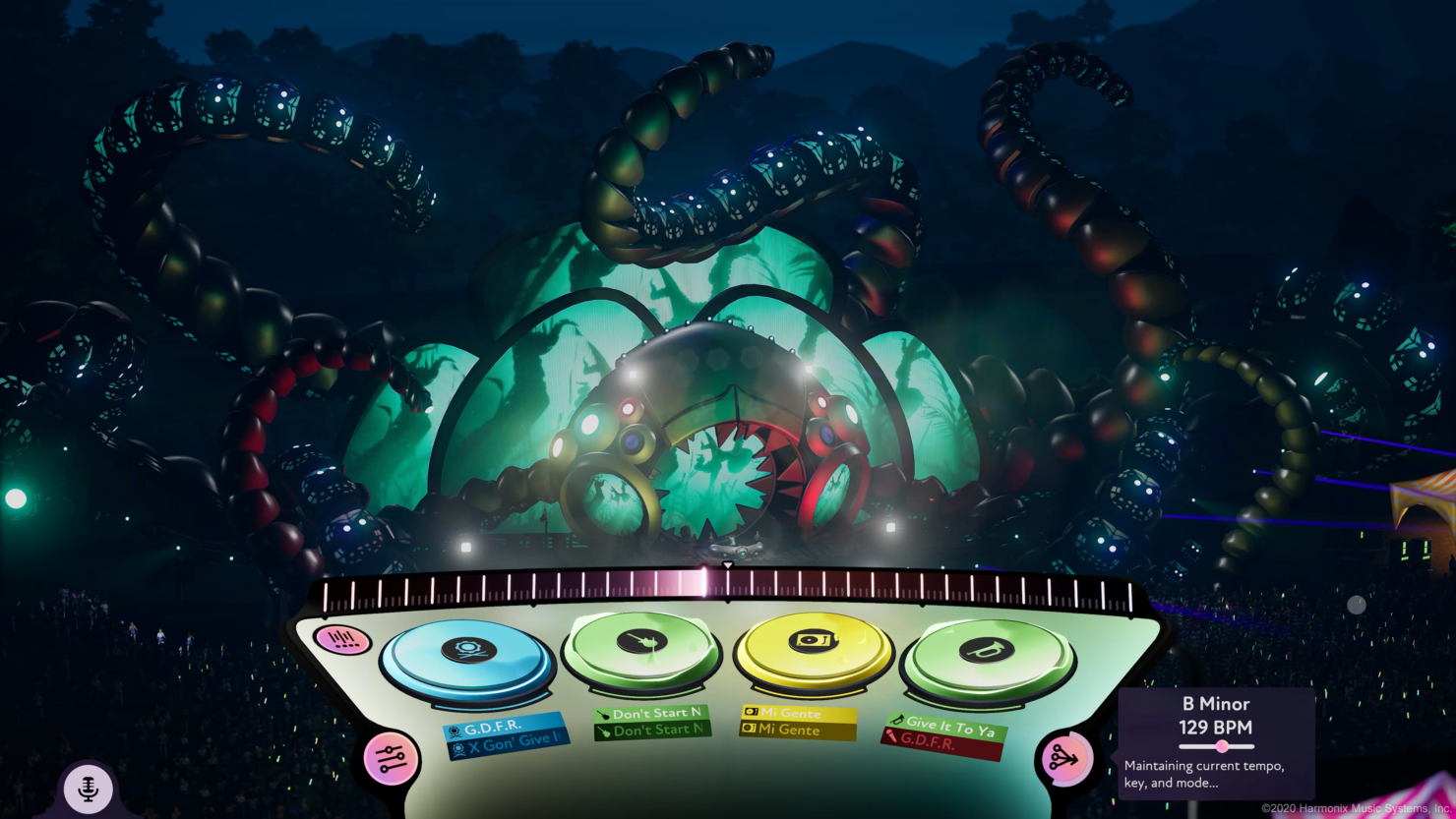 Few rhythm games of recent years have kept my attention during the previews quite like Fuser. The brainchild of Harmonix's music fusion system they first brought out with the tabletop card game Dropmix, Fuser lets players craft their own essential playlist into one high energy music festival. With each month bringing in a new update and some cool new features, we took a look at what's coming next to Fuser ahead of its November launch. 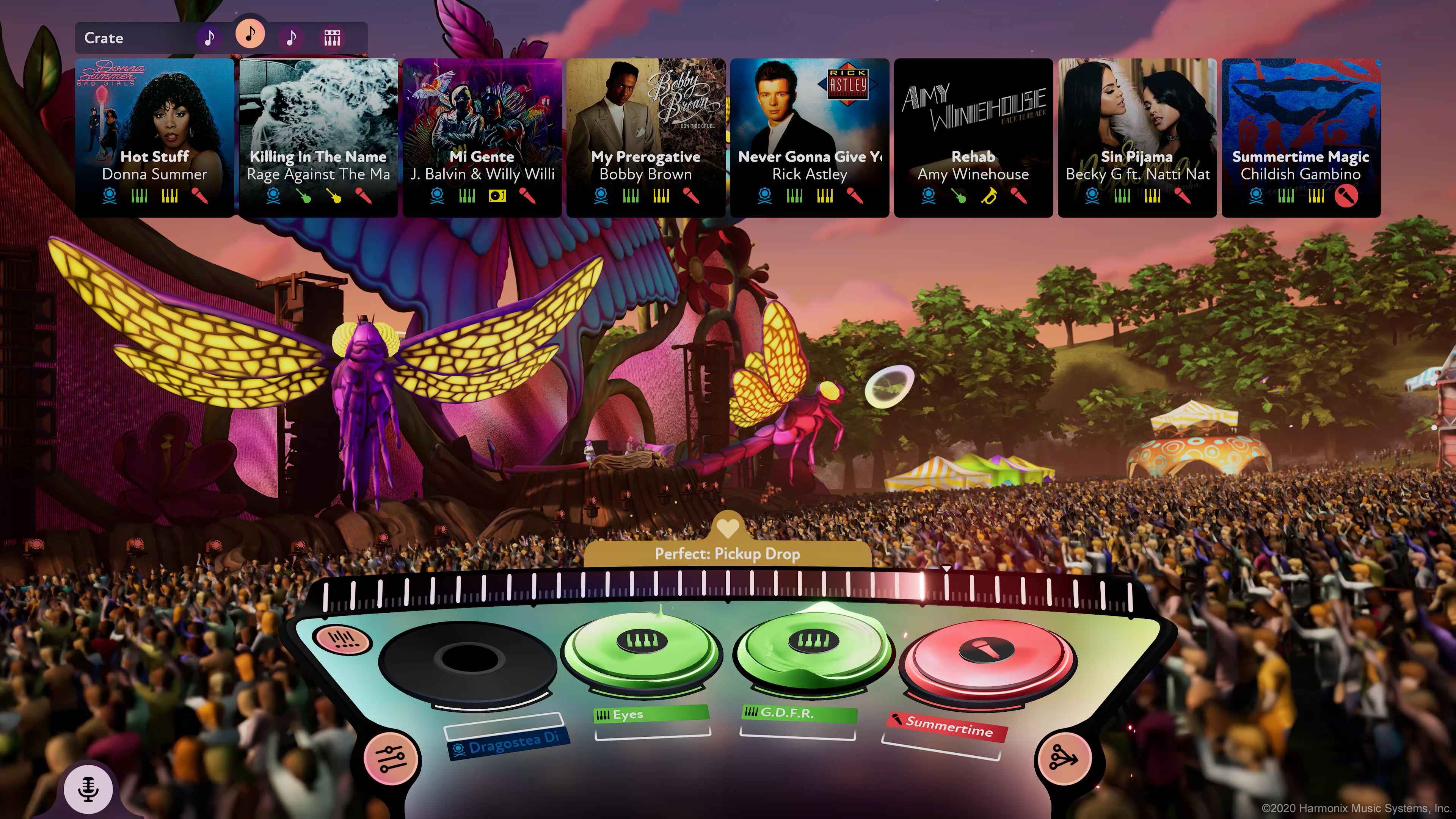 Those DJ tools that Harmonix has been showing off since Fuser's first reveal at PAX East have been shaping up to be a surprisingly robust deck that's more than just dropping discs and letting them spin. There's still a core element of taking requests from your audience and promoter that makes up the primary way to score points in Fuser but there's so much more you can do than just queueing up the background synth to Benny Benassi's Satisfaction at the right time. As you're mixing, you can queue up two separate tracks of isolated elements, from vocals to percussion and electronics, and swap between the two at will. Players will score more points nailing these transitions on the downbeat but there are also markers in place to indicate when it would sound more natural. While you're mixing, you can swap around the tempo and key but I found that Fuser's internal algorithms did a great job of tracking that for me.

If you get tired of your current mix, you can hit the new mix button on the right side of your deck and depending on which key you hit, you can transition into a smart mix that adjusts everything based on what the game thinks would sound best or go for a completely random shift that might grab the audience's attention or perhaps be a much slower tempo jam than you were going with to a Rage Against the Machine mix. 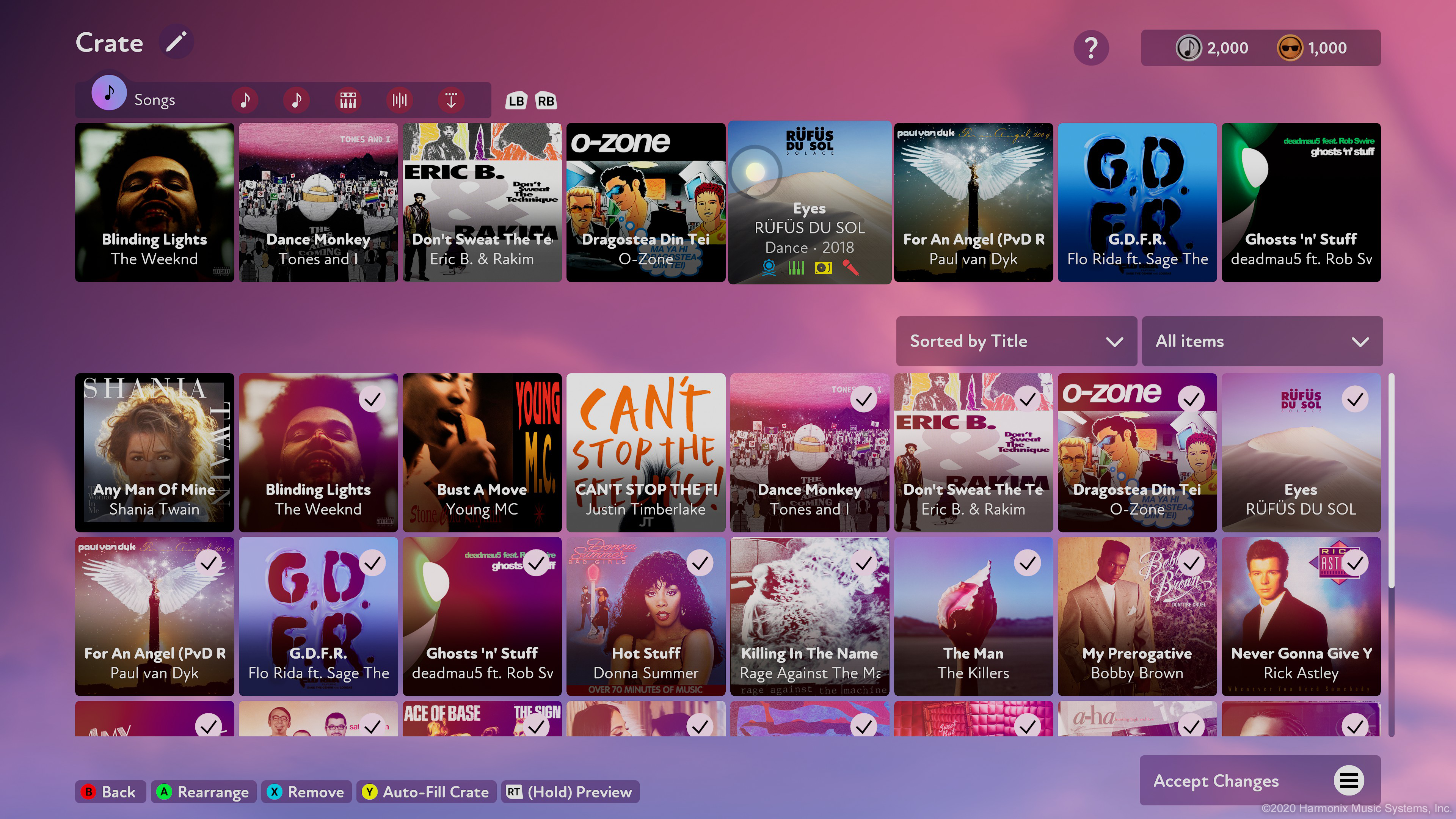 In addition to the songs you're packing in your song create, the latest preview update for Fuser adds in a number of instruments and effects that you can drop onto your deck at any given time. You can bring along eight of each in addition to twenty-four songs, leaving the player with no shortage of ways to get the crowd pumped up. These instruments range from synths and bass to various styles of brass and strings. I had twelve instruments available during my preview with a ton more slots available to work with. When I spoke with the developers at Harmonix, they mentioned that players will be able to use one of Fuser's two in-game currencies (earned from regular gameplay) to unlock new core instruments over time, as well as a significant number of the on-disc tracks.

Harmonix is continuing their focus on social sharing when it comes to your Fuser mixes. Any time you come up with a killer bridge or transition, you can clip what you've just created and share it online to their internal ratings board where other players can check out what you've played and give it a quick rating. While you can't include a full session's mix in the community hub, you can share as much of a song as you like- up to 32 bars. You should be able to listen to mixes that include songs that you don't yet own and I made sure to give the Harmonix team a subtle hint that there should be some way to purchase DLC tracks directly from a mix if you like what you hear. 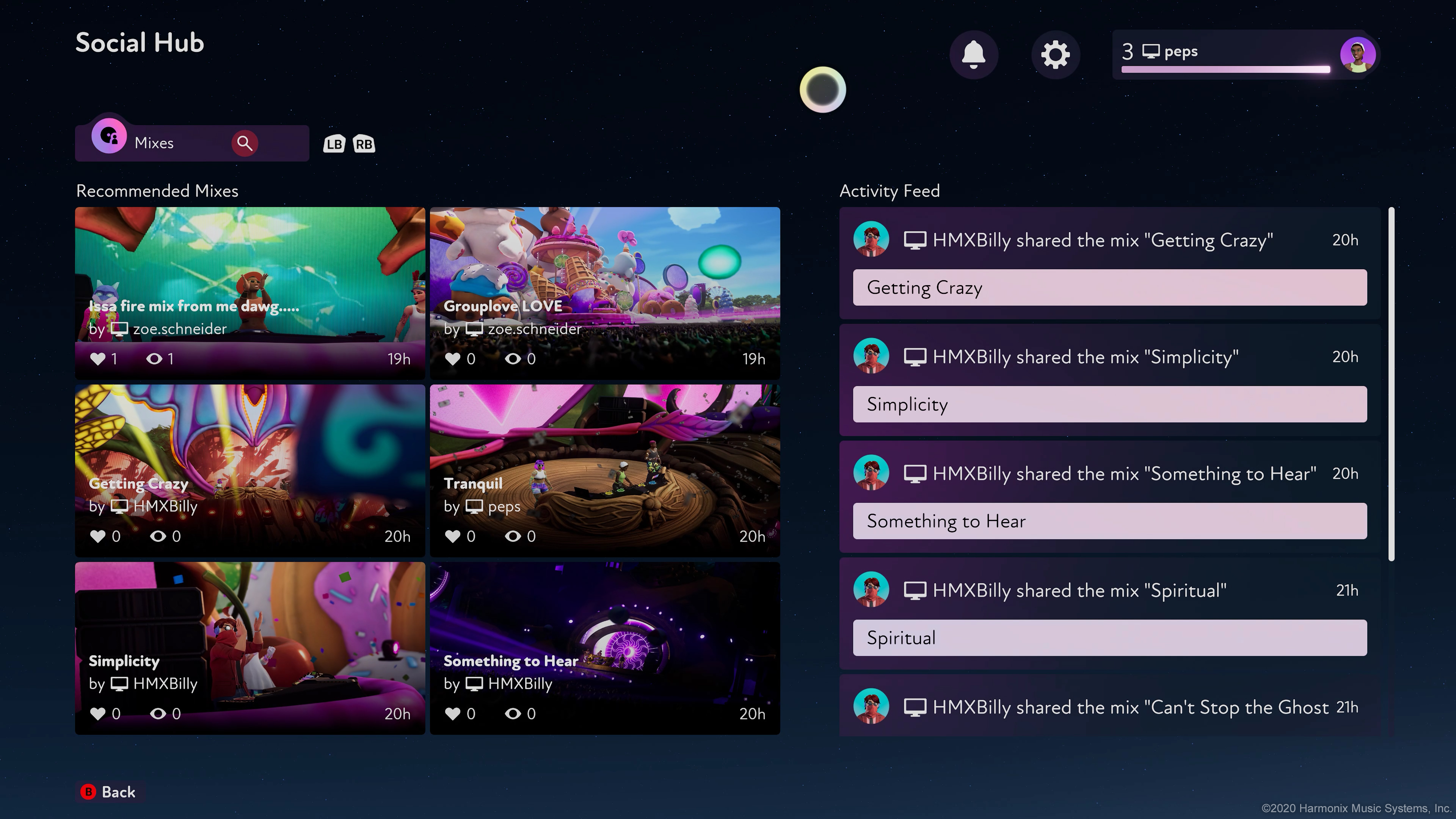 Fuser will have no shortage of multiplayer offerings as well, so don't worry that sharing those small mixes is all you can do with your friends. With a competitive scoring element, you and up to three other players can take turns basking in the spotlight at Sub Astral (or any of the other venues) and spinning your discs the best way you know how. While not actively mixing it up, other players (and even spectators that join in the lobby) can react with fires and chef's kiss emojis if you think the mix is just right, and if not, you can make requests that the current DJ may or may not decide to take you up on. Since you're bringing your own crate of songs into the multiplayer mode, it's a great way to get a feel for what other songs are available and which ones come together to complement each other nicely. 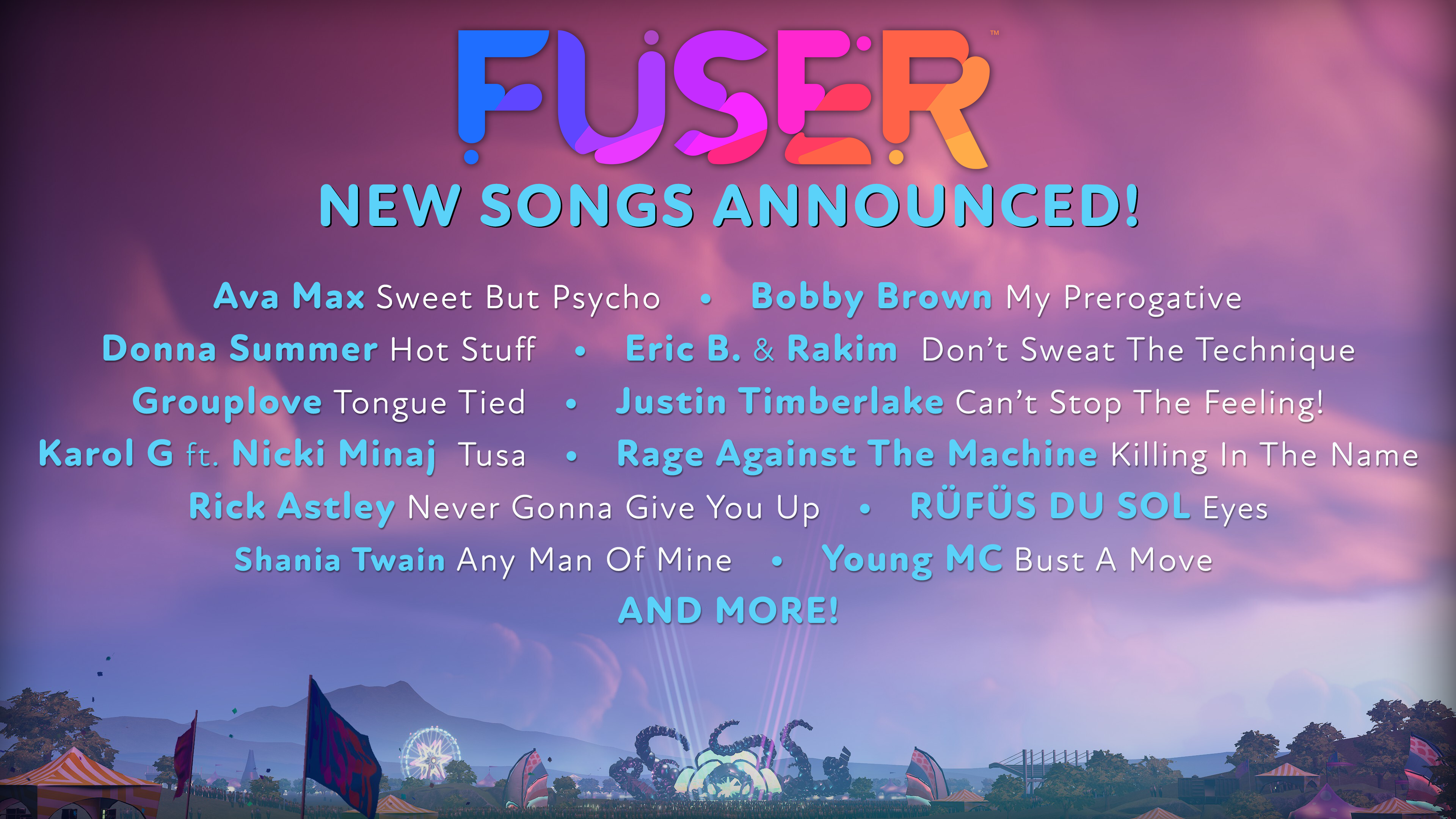 As a small bonus, NCSoft and Harmonix are letting us announce the next set of tracks coming to Fuser's hundred song roster. You can check out the setlist of the new song drop below. I'm personally partial to Never Gonna Give You Up's rhythm section but hey, that's just me. Harmonix, if you're reading this, I would do anything for that saxophone track from George Michael's Careless Whisper in my Deadmau5 mashup.

Fuser will launch all current-generation platforms and PC (Steam/Epic Game Store) on November 10th, 2020 for a suggested retail price of $59.99. There will be a VIP Edition available on digital storefronts for $99.99 that includes 25 additional DLC songs at launch as well as a number of unique cosmetics for your virtual DJ.