UPDATE 2: The official Final Fantasy XV Twitter profile has elaborated further on the possible PC release of the game. Apparently, the game employs DX11 generation tech that's only available on consoles. Once these versions are out, the team will be looking at a higher spec version for PC, which would most likely be based on DX12/Vulkan.

UPDATE: Engadget got an official comment from Game Director Haijime Tabata. Apparently, Square Enix is aware of the big call for this version but the company has not decided yet to release Final Fantasy XV on PC.

Unfortunately we weren't able to do simultaneous development on a PC and console version for XV. We had to focus on the console version and our goal was to maximize, optimize everything for the HD consoles. Once that's done, then we will definitely take a good, hard look at PC and what we need to do, and consider all our options. But right now we aren't decided, we're still considering a lot of things.

It sounds like it might take a while to see the game on PC, at the very least. You might be better off picking a console version if you're really eager to play FFXV.

ORIGINAL STORY: A few hours ago, Square Enix has revealed all the latest details on Final Fantasy XV during the Uncovered Final Fantasy XV event. Unfortunately, the announcement that all PC fans of the series were expecting didn't come, but it seems like there's still hope for a Final Fantasy XV release on PC. 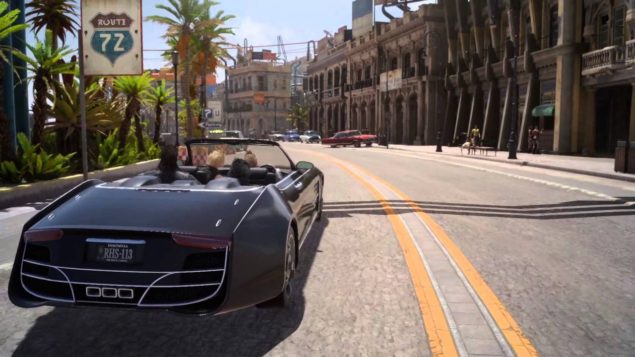 A new Final Fantasy XV ad that appears on the GameStop website is currently listing the game for a PC release, alongside the PlayStation 4 and Xbox One release. During yesterday's event, a PC version hasn't been ruled out completely, but if the new ad is showing correct info, Square Enix might have had some other reason to not announce the PC version during the Uncovered event. You can check out the ad in the image below, captured by NeoGAF user BernandoOne.

The new mention of a Final Fantasy XV PC release isn't the only one that has been spotted in recent times. Back in February, the source code for the Uncovered website included a mention of the Steam Store, as well as one of a possible retail release. With most Final Fantasy titles now available for purchase on Steam, there's a very good chance that Final Fantasy XV will eventually be released on PC.

PlayStation 4 and Xbox One owners can try out the new Platinum Demo, which has been made available shortly after the end of the Uncovered Final Fantasy XV event. The demo, which features a young Noctis, will not be part of the full game and it will allow players to unlock Carbuncle in the final release upon completion.

Final Fantasy XV launches on PlayStation 4 and Xbox One on September 30th in all regions.