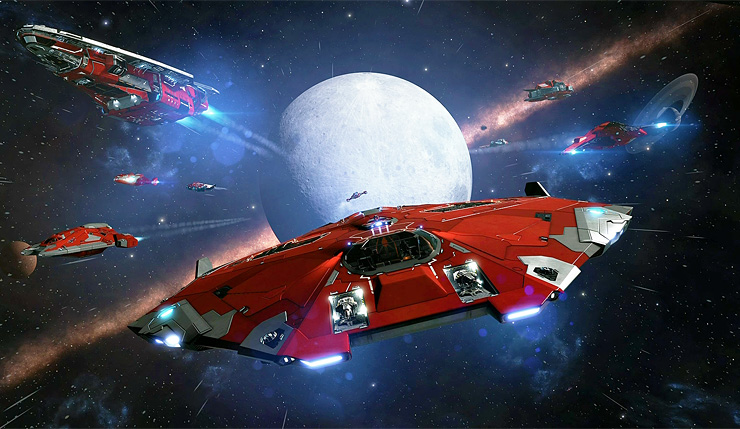 Frontier Developments have revealed what to expect from Elite Dangerous’ next big update, the first one since late last year. This update is largely focused on easing new players into the game, adding a new Beginner’s Zone tutorial area and other helpful features. There’s also new stuff for longtime players, including Interstellar Initiatives, which are essentially longer, more important Community Goals. You can get the full rundown on the Elite Dangerous April Update, below. 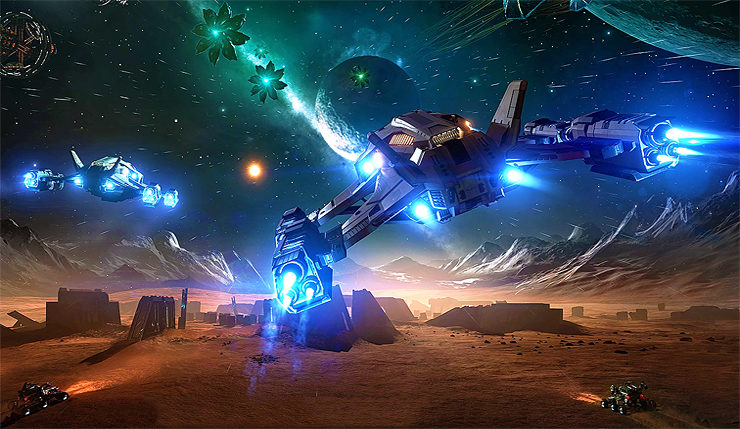 A new collection of systems has been added for newly-created Commanders, and can only be accessed by pilots until they earn their first Combat, Trade or Exploration rank. In addition, the authorities here will provide simpler missions that even the smallest of Sidewinders can complete. Across the galaxy, new Commanders will also have a reduced rebuy until they gain their first Combat, Trade or Exploration rank, a step in the path towards greatness!

​We're adding an upgraded version of the original Docking Computer, a module designed to allow Commanders to relax, let go of their flight sticks and automatically dock in stations to the serene strings of Johann Strauss II.​ The Advanced Docking Computer will not only allow you to dock, but also allow you to automatically undock from a station without anxiously worrying about getting stuck inside the mail slot. Let's face it, it will also help with those embarrassing Type-10 spoiler moments!​

This module will also come as standard in all newly-purchased small ships. If you're starting up a new account, you will find the Advanced Docking Computer in your ship from the get-go - making it easier for you to embark and disembark from your favorite stations without colliding with the walls, landing pads or your fellow Commanders.​

​Available at your nearest starship department store (i.e. Outfitting) comes the new Supercruise Assist module. While in Supercruise, you'll be able to target a destination and activate Supercruise Assist, putting your safety in the reassuring hands of a machine. In this mode, your ship will automatically maintain the correct speed and approach to your target destination, and break out of Supercruise at the optimum time. You'll still have to align with the correct location, but you will no longer have to worry about doing a loop of shame!​ With the Supercruise Assist, you will also be able to enter into orbit around a body - allowing you to launch discovery probes and take screenshots without the fear of face-planting the dusty, rocky ground.​ This module will also come as standard in all newly-purchased ships.​

Free module slots for everyone!

In Beyond - Chapter Four, the cockpit was completely revamped, and with the April Update, come even more improvements! The latest area to feel the love is the Navigation Panel where, in places, we have added icons for a tighter, more visually appealing layout. A new column has been added to this panel, denoting activities in an area, mission targets, plotted routes, Wanted status and if the threat level of some areas is too high. The Navigation popup expands on this information, providing more details about the location, such as faction details, star class, information of resources and more!

Two of these may sound new to you - so allow us to explain!

Like the Codex, the Pilot's Handbook is a treasure trove of information, providing details on the many activities available to you in Elite Dangerous. Whether you're a veteran, or you've only just graduated from flight school, these articles will help you discover what opportunities are out there - and what is required to get involved in them. With links from the cockpit straight to the Pilot's Handbook, sourcing information is easier than ever before!

When you're an interstellar trader, every minute is a potential sale... so to help you avoid being badgered by a strange man trying to sell you the 'deal of a lifetime' a number of improvements have been made to the user interface of the Commodities Market.

You will find two panels in the Commodities Market, Buy and Sell. Each new panel will provide you with important information:

Our name for the previously announced 'Community Events'. These are series of in-game events that play out over the course of around a month. Each one features several phases that will alter as the narrative progresses, and may end with lasting effects on the galaxy. We'll be delving deeper into these in just a couple of weeks.

Elite Dangerous Season 3 wrapped up in December of last year, and Season 4 isn’t scheduled to launch until 2020. In the meantime, Frontier will be keeping things shipshape with a series of updates throughout 2019 – this one is the first of them.

Elite Dangerous is available on PC, Xbox One, and PS4. The April update drops on the 23rd.