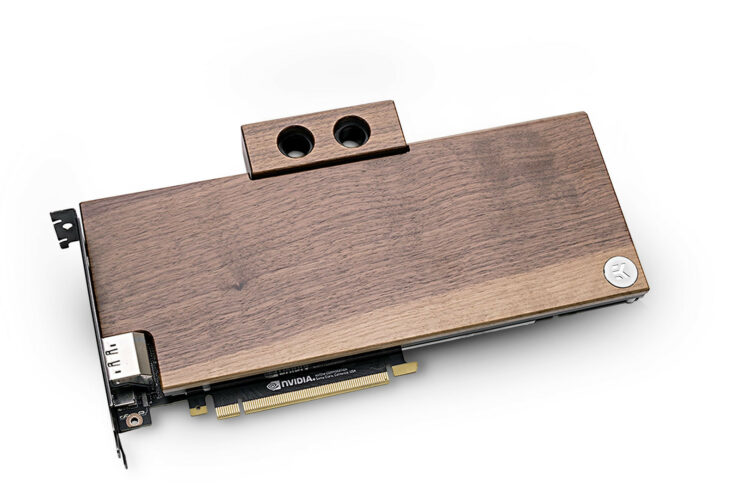 EK Water Blocks, one of the best water cooling parts supplier on the market, has had making wooden water blocks on its mind since Computex 2018. They finally got around to making wooden water blocks which are part of the EK Lignum series. EK wanted to combine the oldest building material which is wood with the most modern way of cooling a PC to create something remarkable. They offer this for their 2080 Ti block, their CPU block, and 12mm compression fittings.

These blocks were shown off at Computex 2018, but for some unknown reason, they did not make it to the market. EK's founder, Edvard Konig, designed these because of his love for woodworking. The design of the block ensures that water will not get into contact with the wood to allow for any natural expansion or contraction of the wood caused by temperature and humidity. The blocks use walnut wood with an open pore matte varnish to preserve the woods smooth feeling.

The EK-FC RTX 2080 Ti Lignum is a complete change of the EK-Vector RE water blocks designed for multiple reference design Nvidia GeForce RTX 2080 Ti video cards, but you need to check with EK to make sure your RTX 2080 Ti is compatible with the block. The block itself covered the entire PCB length with the walnut cover, and the wood also covers the block top and terminals, making for a completely wood exterior. No metal can be seen on the block.

Underneath, the GPU, VRMs, and VRAM all get cooled directly with coolant running over the top. The GPU block uses what EK's patented Open Split-Flow cooling engine characterized by low hydraulic flow restriction along with an improved jet plate and fin structure for the best flow in all possible scenarios.

The EK-CPU Lignum CPU water block is built on the EK-Velocity line, a high-performance block that supports both Intel and AMD processors which are listed below the image. The block uses the 5th generation EK CPU cooling engine, which has been tweaked for better performance and optimal coolant flow. It also promises low hydraulic flow restriction allowing the use of all pumps for quieter operation while maintaining performance.

The base/cold plate is made from nickel-plated copper and machined to a dense micro-fin structure, with a contact surface that is machine-polished to a mirror finish. The top is made from a CNC machined black POM acetyl functional top covered by a layer of walnut wood. Socket compatibility is listed as 115x, 2011-3, and 2066 for Intel as well as AM4 for AMD.

Finally, we have the EK-HTC Lignum 12mm hard tubing compression fittings. EK uses its CNC machined brass fittings with a walnut cover making for a truly unique looking fitting like none other on the market. Threads are the same as the non-Lignum line with a G1/4 inch BSP: 4.5 male thread length.

Pricing has been made available and there is a substantial premium on the Lignum compared to the line not encased in wood. The EK-CPU Lignum priced at $189.99 (€180) versus $80-90 for the regular line. The EK-FC Lignum RTX 2080 Ti is $375 (€350) versus $130-140 which is a significant jump and for me extremely hard to seriously considering purchasing it. The EK HTC Lignum fittings at $18 (€18) each versus $8 each. All three products from the Lignum line can be pre-ordered now from the EKWB shop and are expected to ship out on June 6. If you really want the wooden look, you are going to end up with a hole in your pocket.