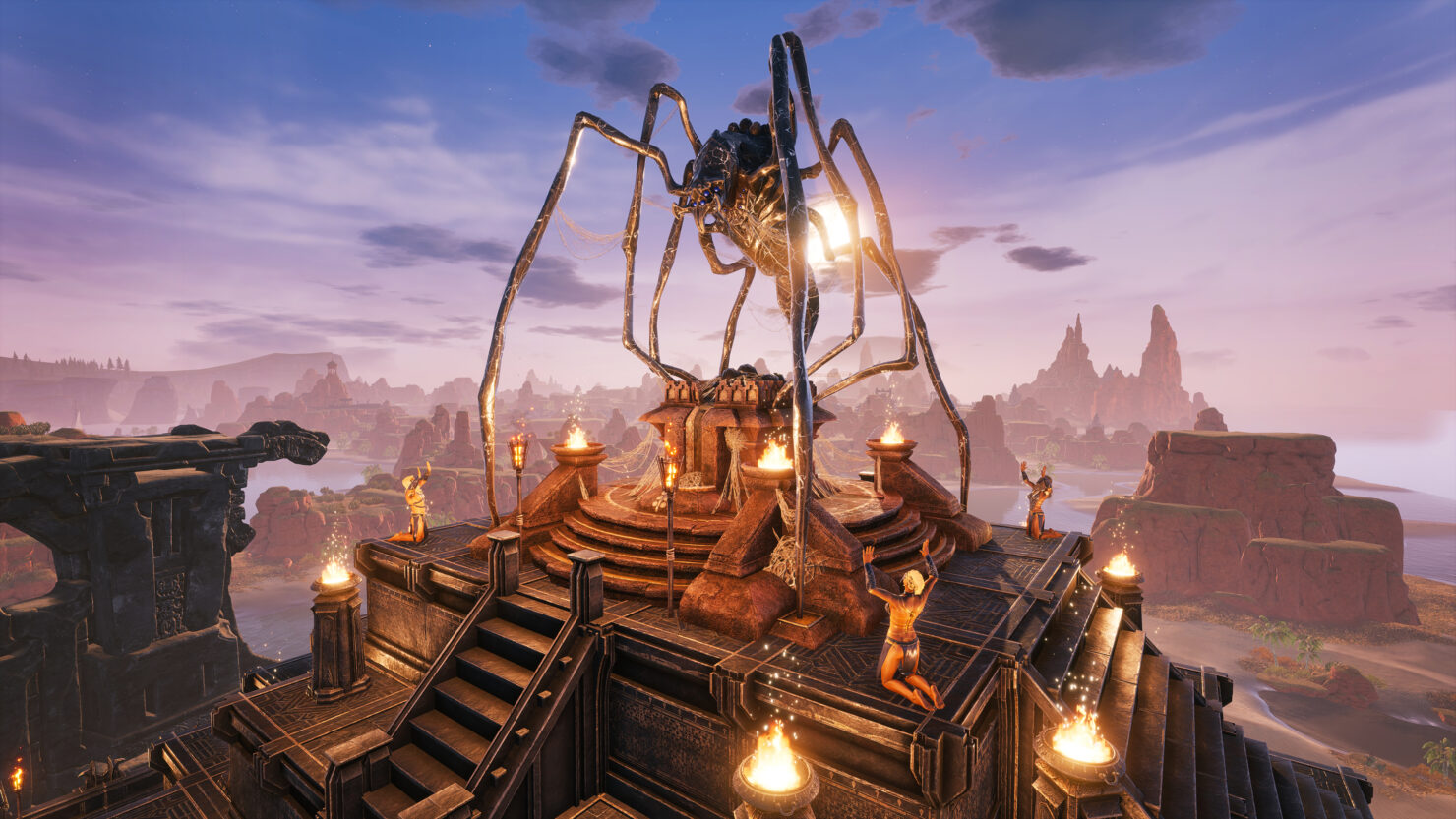 Funcom is gearing up for a major update to its Conan Exiles expansion, Isle of Siptah. Launched in early access last September, Isle of Siptah will be updated tomorrow to version 2.4, a milestone patch that will add plenty of features and content as we learned in a recent presentation.

For starters, the playable area of the Siptah map will be increased by roughly 20% with the addition of three biomes, the Ashlands, the Floodlands, and the Savannah. This makes Siptah almost as large (90% or so, according to Funcom) as the original Exiled Lands map while also enhancing the diversity of the environments within the Isle of Siptah.

A brand new religion is now available, the Cult of Zath. The Spider God (whose in-game statue can be seen in the featured image) can be summoned to crush your enemies for a brief time, though it'll take a lot of resources to accomplish the feat.

PvE (Player versus Environment) has been expanded as a whole, following the community's feedback. The map is now populated with new enemy races, new NPC camps, and points of interest. A new mechanic enables the on-demand summoning of certain bosses that can usually only be fought during storms. Players will have to roam around the camps to gather their figurines and subsequently bring them to a summoning altar. Of course, killing them will be very rewarding in terms of loot.

The highly requested character transfer feature, originally scheduled to launch with update 2.4, has been delayed to the full launch of Isle of Siptah (which will happen in June). Character transfers will give players the opportunity to move a character between official and unofficial servers while keeping the name, appearance, level, and all of the character's backpack. It'll also be possible to move between the Exiled Lands and the Isle of Siptah.

Last but not least, the game's visuals received an overhaul of its lighting and environments with this patch. The skybox is much more detailed and there's now volumetric fog, too; you can check out some comparison screenshots below.

Following the presentation, we got to interview Funcom Project Director Scott Junior to discuss what's next for Conan Exiles after Isle of Siptah.

Is there anything you can share about future plans with Siptah and Conan Exiles as a whole? Any more landmass planned?

The team is still working on both Isle of Siptah and Conan Exiles and will continue to do so. After 2.4 is released, we will evaluate the state of both maps and then start working on either a new feature or a new map. We will share more with the community once we are further along the development process.

The Mummy of the Ring, or lack thereof, continues to be a topic of discussion between fans. Will players see that added eventually?

Unfortunately, we are not ready to discuss this yet.

User-made mods have shown that a few squares of new landmass could be added to the Exile Lands in the upper right quadrant. We know that there are some dungeons located in that location already, but some landmass could be added. While it isn't a significant amount, players have shown a strong desired to see that quadrant filled out more. Is there any discussion to add some more land in that area for the Exile Lands?

As you stated the northeast quadrant of the map is where we currently have the majority of dungeon content located. We could work around this to answer additional gameplay areas to the Exiled Lands, but for now, we do not have any plans to do this. If future features require additional gameplay space we would probably use this area for this, but I don’t have anything concrete to discuss about that right now.

During a dev stream, you once talked about a personal desire to see small engagements with followers. Such as ordering a squad of followers at a time, which sounded similar to features seen in other games where you command squads or armies. Is that still on the table in the future? If so, how would that be balanced since even a single follower can be so strong?

I was probably getting carried away with my fandom of another game that deals with horses and swords. If we added a feature to allow players to control more than 1 follower and engage in follower squad combat, we would need to rebalance how powerful followers currently are.

The Maelstrom summoning enemies has shown to be a popular feature in Isle of Siptah. The Sandstorm for the Exile Lands was once considered as a possibility to do the same. Any consideration to bringing back the idea of summoning monsters in the Sandstorm in the Exile Lands?

We had some prototypes of this feature working but unfortunately, it caused too many performance issues for us to go forward with development. Since then, we have added several biomes to the Exiled Lands that wouldn’t really work with a sandstorm. Currently, we do not have any plans on implementing the feature.

With Bows taking a backseat to armor penetration in version 2.4, this once again opens a door for the Crossbow to make a comeback. Players have expressed a desire to see them return since Crossbows were originally taken out. Any thoughts on adding them back in, or does that add a lot of balance issues?

We reverted the majority of changes to bows/arrows based on feedback from our external test group and from the testers on test live. The final version will be a change to the damage for Hollowbone Arrows. As for crossbows, we don’t have any plans of adding them right now. If we decide to add a new weapon type, we will consider it though.

Do you have any plans for Isle of Siptah unique mounts, or any other future mounts, such as the Elephant or Camel?

The Mount Update and Riders of Hyboria were both very successful additions to Conan Exiles, so we will consider adding additional mount types in the future.

The Isle of Siptah expansion has a lot of water on it. You are now adding PvP water combat. How about PvE water combat? If so, will the water dungeon on the Exile Lands be updated to reflect that?

We don’t have any plans to add underwater combat against monsters right now. If we do in the future, we will consider updated The Sunken City and any flooded vaults.

The vaults of Isle of Siptah are highly appreciated by fans in the early access. There are still many places where more could be added, though. Are any additional vaults or dungeons on the table for the future?

I’m glad people enjoy the vaults. I think the team that worked on them did a fantastic job. Currently, we do not have any plans to add additional vaults to the Isle of Siptah. Update 2.4 adds a lot of new NPC camps, Points of Interest, and new PvE mechanics for players to discover.

Do you have any plans to rework the Clan system, particularly with regards to Ranks permissions?

It is one of the features we may look at updating in a future release.

The new skybox changes, volumetric lighting/fog look great on Siptah. Are there any plans to add these same graphic improvements to the Exile Lands? And if not, could you share why that is?

I am very proud of the work that our art/engineering team did with the update to lighting on Isle of Siptah and I’m glad to hear people are enjoying how Isle of Siptah looks. We have discussed introducing volumetric fog to Exiles but right now we cannot commit to it due to the impacts it has on client performance for the console versions of the game. If we get a chance in the future, it is definitely something I want to do, but we need to focus on optimizations for Siptah and Exiled Lands on XB1 and PS4 first.

Will Conan Exiles be enhanced for PlayStation 5 and Xbox Series S|X? If so, can you share the relevant technical details?

Update 2.3 adds device profiles for the Xbox Series X and S which will increase performance. In Updated 2.4 we have introduced a lot of optimizations for the PS4 and XB1 version that will further increase performance on all platforms. We aren’t ready to share the exact details yet, but we will before 2.4 is released on consoles.

Do you have any plans to add Unreal Engine features such as NVIDIA DLSS and/or ray tracing effects to Conan Exiles? What about DirectX 12 and/or Vulkan support on PC?

We don’t have anything to discuss about this right now.

What are the odds that we'll see the game on other UE-supported platforms like Google Stadia and/or the Nintendo Switch?

We don’t have any plans for additional platforms that we can discuss right now.