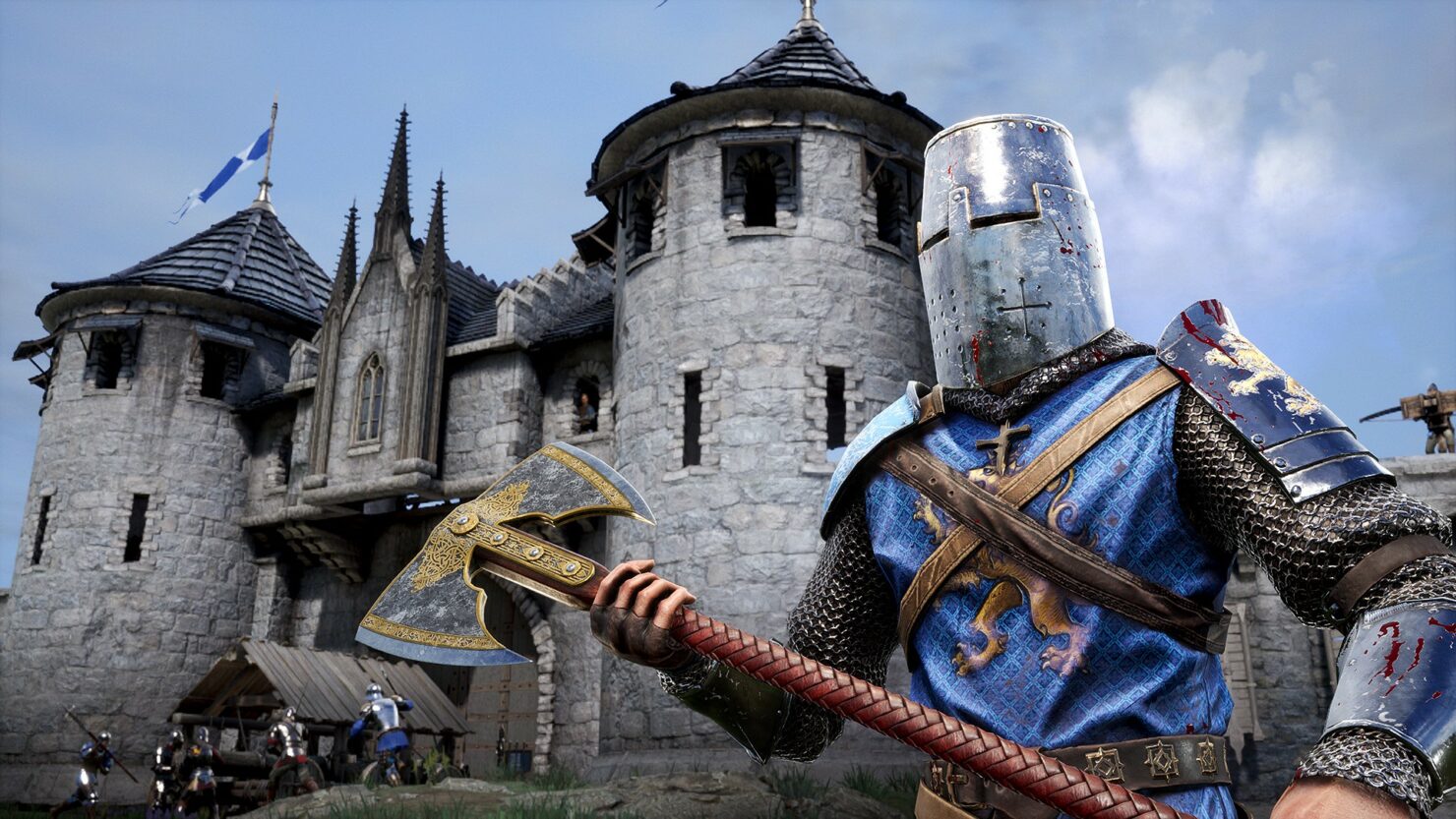 The axe is a misunderstood weapon. So many see it as a ruthless weapon for brutes and barbarians. But it can be a thing of beauty and precision, too: decapitating enemies and surgically removing their organs too.

For those of you looking for the best way to use your axe and take off some heads, this guide will walk you through the basics of playing as the Vanguard's first subclass in Chivalry 2.

Leave the Chivalry to the Knights 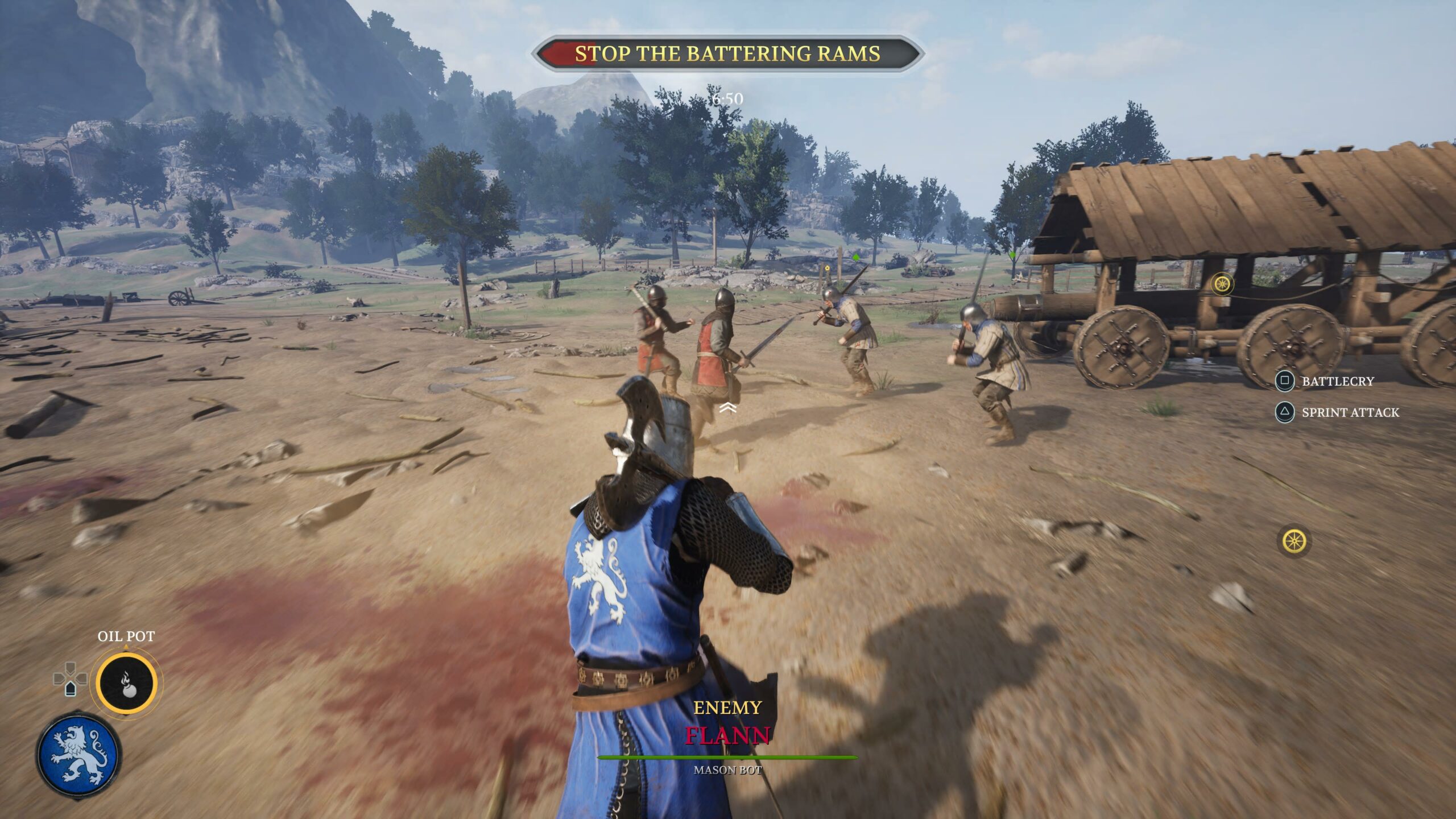 Chivalry, in theory, was the code of honour that knights took that included protecting the weak and fighting fair. Luckily for you, you're a Vanguard, not a Knight. As the most damaging army member, you don't want to waste your glorious axe swings on blocks.

Instead, you want to focus on attacking from the side and behind. Look for groups of enemies unaware of your battle cry and get up to them before they can even think about doing anything about it. Fights ins Chivalry are nearly always chaotic, but there is nearly always a front and back, even if there isn't anything resembling a frontline. Let the Knights fight at the front and move around until you can attack from behind, catching people unaware.

And if you've properly got the drop on someone, utilise that tutorial training and deliver a heavy attack before they can react. This is often enough to kill them outright, leaving you to barrel into the next foe. 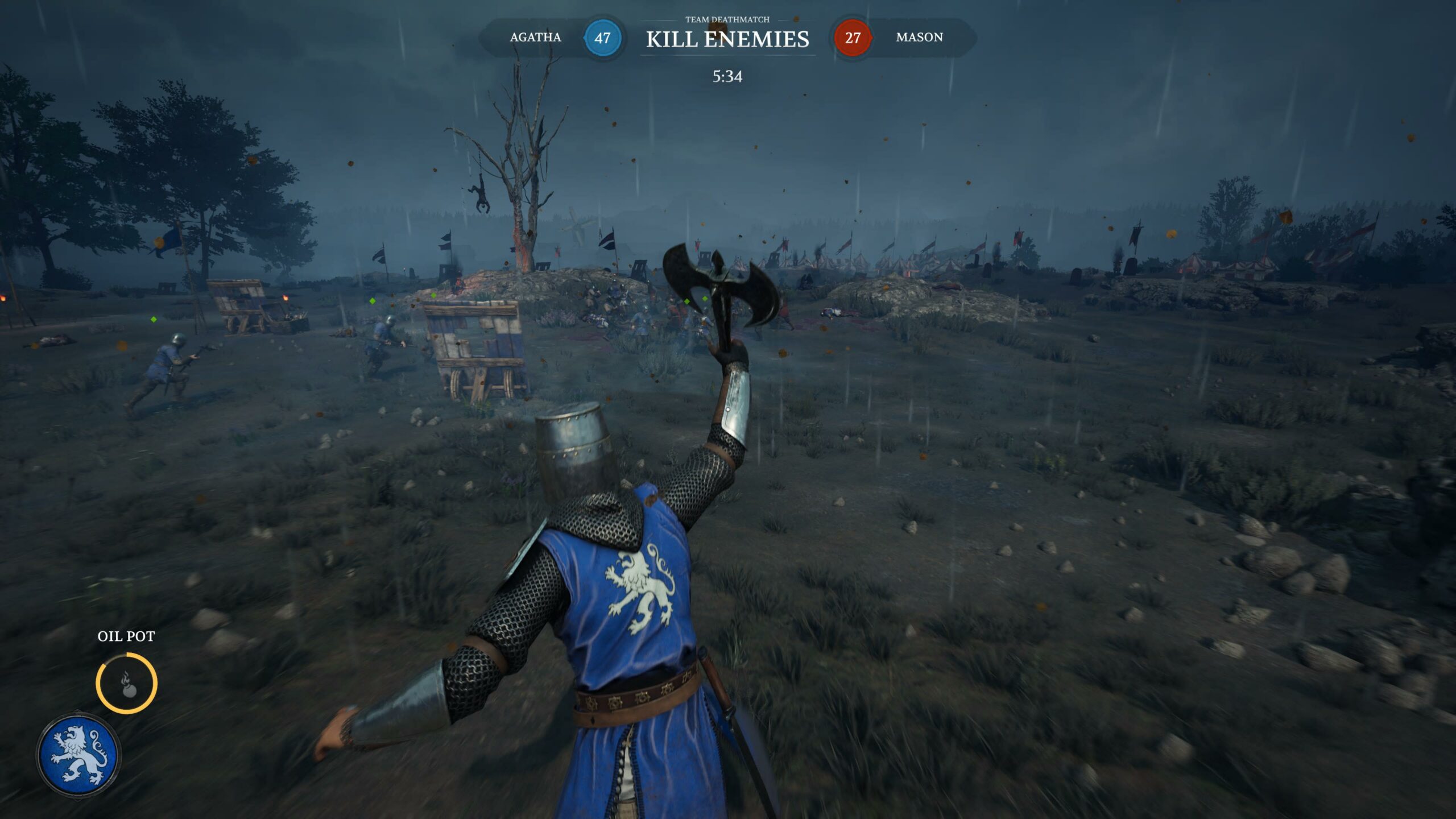 And while you're flanking and out positioning your enemies, make sure you're not ignoring the archers the enemy team is squirrelling away somewhere. These ranged foes can seriously upset your ambushes as well as ruin your teams offensive and defensive strategies.

They'll nearly always be focused on the biggest fight they can see, though, so consider taking the scenic, inconspicuous route to reach them with raising the alarm. Thanks to the Devastator subclass of the Vanguard, you'll be moving pretty quickly and can hopefully take them by surprise.

When encountering a bunch of archers at close range, they will either flee or draw their daggers to fight or a mix of the two. If they run, chase the larger group down and finish them off before they can set up somewhere else. Try and keep track of any outliers or strays as they might attempt to take you down. If they fight, you'll have the advantage but shouldn't underestimate them. Their melee weapons are puny but quick, so catch them off balance and off guard to overwhelm them with your assault.

It might not feel like you're doing much far from the battlefield and chasing down these weaklings, but trust us that the rest of your team will be feeling much stronger without arrows raining down on them.

The Closer, the Better 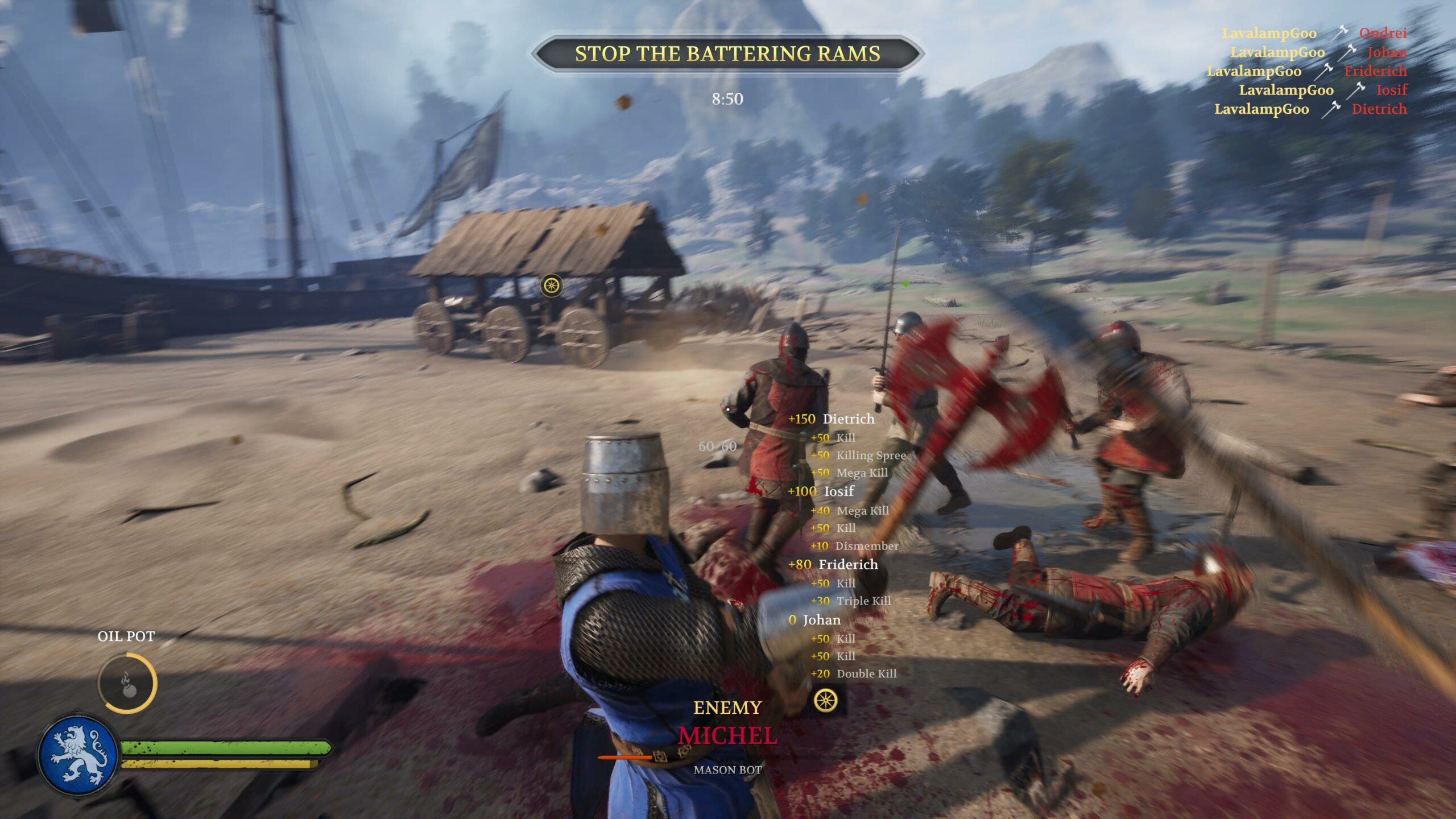 Your big starting battle axe might look like it's got plenty of range, but it's actually one of the shortest early game weapons. This means that Knights and Footmen, the other melee classes, can probably beat you on reach, so as a Vanguard you'll have to get in nice and close before you start swinging.

This is another reason why flanking is so important to Vanguards since it lets you safely close the distance, but in the middle of a large skirmish, you should be able to find yourself getting in close without much worry.

Once you are in range, you want to make sure that you keep it that way. Look out for Footmen dropping back or Knights trying to outflank you and match them step for step wherever possible. Make sure that you don't follow them too deep and wind up completely surrounded. Disengaging and finding another close target can be equally effective, as long as you keep your eyes on the one that fled.

When you have a target in mind and have the range to do something about it, you can let the battle-axe fly. While the range is short, it has a fantastic speed for its damage output, beating both the Knight's longsword and the Footman's Halberd on both. That means that when you see an opening as a Vanguard, you should take full advantage. Deliver as many combos as possible and use the camera to make sure they connect as soon as possible. Battle axes do extra damage to shields and have faster overhead swings, too, so nothing should get in your way. With any luck, this will really hamper the enemy's ability to do anything but block. Soon enough, even that won't stop your attacks.

Make sure you've got a dash in the pocket, though, in case you need to get out of dodge should they break your combo or have a friend or two you hadn't noticed before. 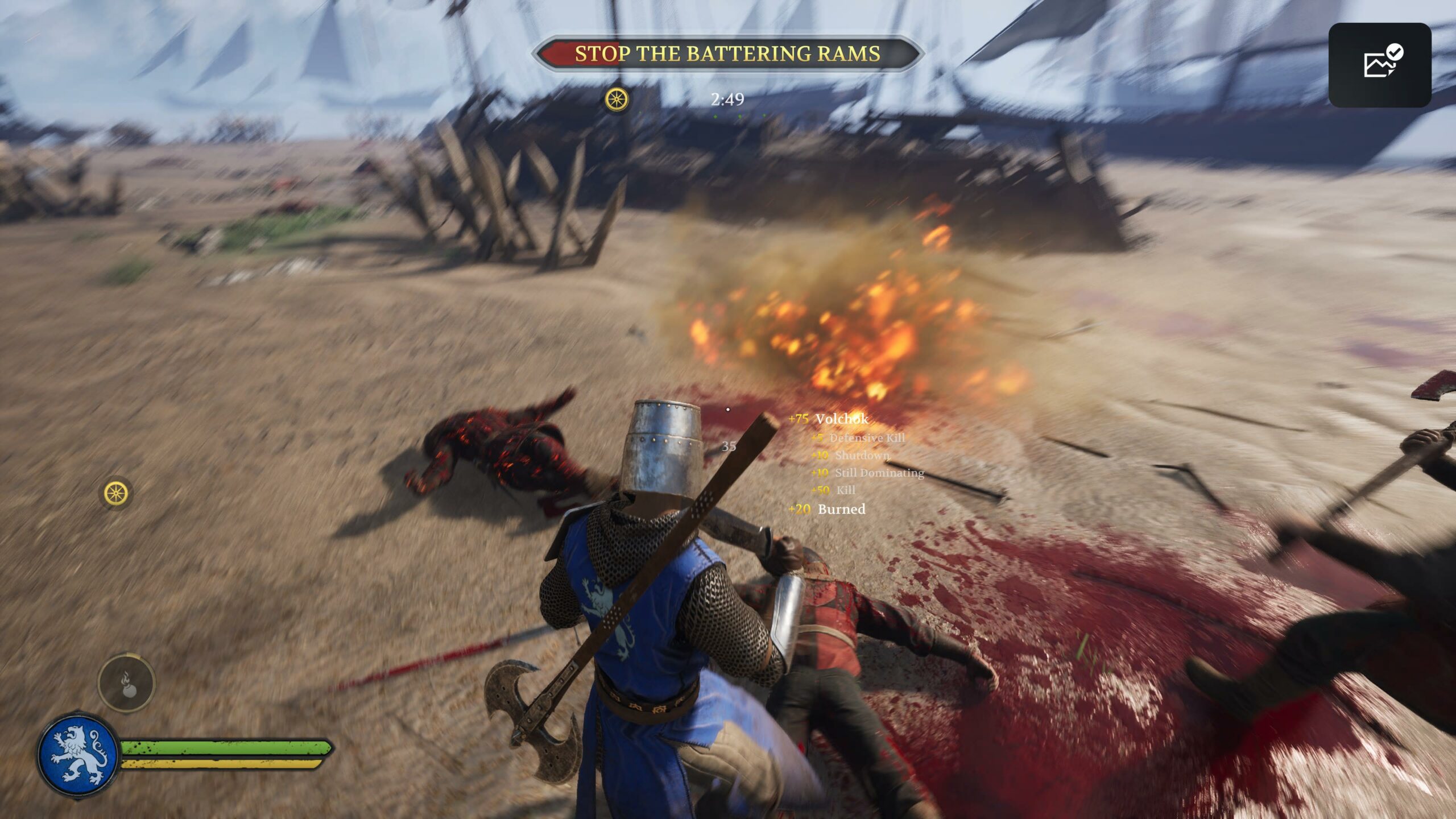 The Devastator's item is the oil pot, a small fiery explosive that sets enemies alit and does serious damage in a small area. Groups of enemies can be hard to kill for a Vanguard, especially if they are spread out and using their range to keep you at bay, but can be countered with the oil pot.

The easiest use is to lob it into the crowd and watch the scatter. From there, you can engage with the broken-up remnants before they can get at your flanks again. Another use is to focus on its linger area of effect capacity and throw it to block a corner, corridor or other chokepoints. This means they'll have to funnel in small numbers and get closer to you, allowing you to show them the pretty axe head you've got.

Oil pots have a large cooldown, though, and charge quicker by successfully getting a kill with the sprint attack. This means you'll be rush in battles a couple of times before you can use it, and also means you should be sure it's a good time to use it before you pull it out.