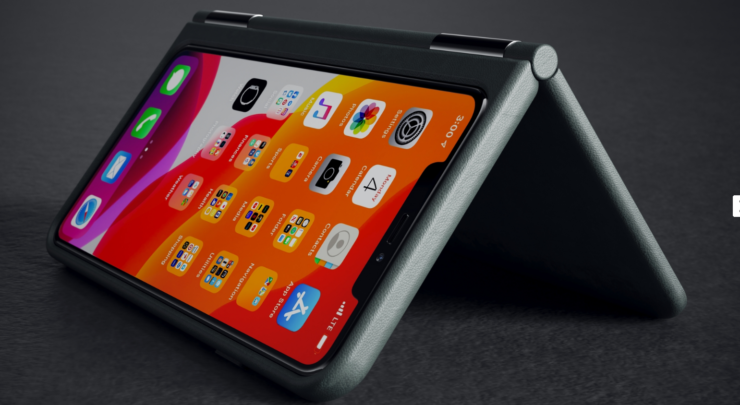 The idea of a dual-screen smartphone is by no means new. They've been around since as early as 2017 and didn't sell nearly as well as their single screen counterparts. The recent LG's G8X ThinQ also promises similar functionality but with a detachable screen. It is objectively better than a foldable dual-screen phone as not everyone wants the dual-screen functionality at all times. The LG G8X ThinQ's second screen is essentially a case that doubles up as a display. Now, an IndieGoGo campaign for a phone case called CastAway promises to add similar functionality to nearly any Android and iOS smartphone.

Like the one found on the LG G8x ThinQ, CastAway will come in two parts, one standard case for the user's phone, and another part that houses the second screen. The screen will physically attach to the user’s smartphone by a 360-degree magnetic hinge. The display is actually a tablet that runs Chrome OS. Both the tablet and your smartphone will communicate with it via their MultiTask+ app which pairs the devices and enables them to communicate over an encrypted WiFi channel. One can even detach the tablet from the phone and it will continue to function as a standalone device while continuing to communicate with your phone over WiFi. The complete specifications of the tablet are as follows

The CastAway team says the phone case should work with 95% of devices since form factor should not be an issue. We're going to have to take that statement with a grain of salt, considering that smartphone form factors span across a wide range of screen sizes and just two sizes are nowhere close to covering them all. The 5.8-inch variant will retail for $249, and the 6.3-inch variant will go for $269. However, backers will get theirs for only $189 and $199, respectively.

There is a likelihood that the project may never see the light of day, so tread carefully. While the concept looks good on paper, making the second screen work in tandem with a smartphone is will be tricky, especially on both Android and iOS. It'll be interesting to see how this one pans out and if things look promising, I just might get one for science. You can find out more about the CastAway case on the official Indiegogo page.

Shaq Fu: A Legend Reborn Has a Release Date, Will Pit Big Diesel Against Demon Celebs