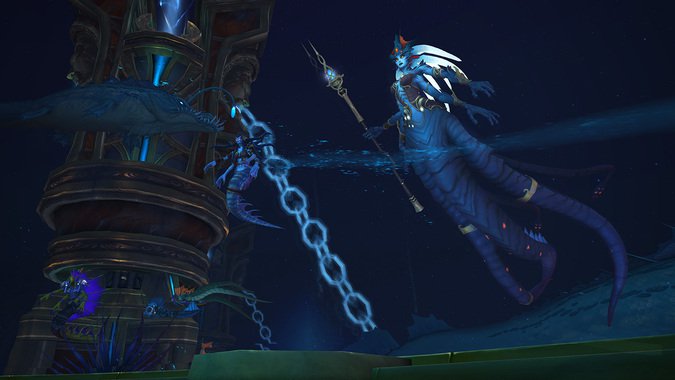 Blizzard has rolled out another Battle for Azeroth patch that includes changes to the Queen Azshara encounter in the Eternal Palace raid.

Following the latest hotfix, Cyranus should no longer throw his Charged Spear if he is defeated just before throwing it. In addition, the patch changes the magic school of Charged Spear from Arcane to Nature on all difficulties. As said, there’s also a nerf on mythic difficulty as the duration of Arcane Vulnerability has been reduced to 5 seconds (was 7 seconds).

Those raiding on Mythic Difficulty will also be happy to learn that Blizzard will be nerfing Queen Azshara’s minions in phase 3 of the encounter by increasing the time before they go Berserk.

“We have a hotfix in testing that we intend to apply to change the Queen Azshara encounter tomorrow morning (PDT)”, Blizzard writes.

Queen Azshara’s minions now Berserk after 3 minutes in Phase 3 of the encounter on Mythic difficulty (was 2 minutes).

We’ve included the full release notes for this new hotfix down below: