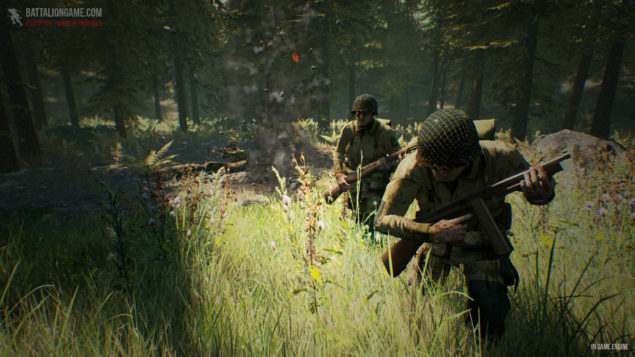 We have previously reported about Battalion 1944, the World War II themed FPS currently on Kickstarter for crowdfunding.

The Unreal Engine 4 powered game crushed its base goal in less than three days and is now over 244% funded at £244K even without British developer Bulkhead Interactive providing stretch goals. These have been teased as "awesome" additions to the game, some of which have been added already to Battalion 1944 according to the studio.

Our team has been working day and night to produce these kickstarter stretch goals. When I say produce, I mean in 17 days we have added entirely new features to the game to show you, we haven't just "said" we'll do it.
We've actually gone and done it.

Some of the things we had already planned, but some of them we've gone away and designed them. We want you to see what you're buying or see why you should raise your pledge. We want you to know how much we as a team and I personally care about this community having a voice. So in the coming days when we announce our stretch goals, we're going to have a sprint to the finish line. The last few days of this kickstarter need to be huge, we need to push, tweet, share, back, like, pledge, raise, and show all the support we can for this game we're all so proud to be a part of.

Joe Brammer, Executive Producer at Bulkhead, confirmed that the stretch goals will be announced this week and shared with the public shortly.

The stretch goals are worth the wait. We've worked long hours and put our talent to work on them. You'll see soon enough.

Without announcing stretch goals, we added £140,000 to date. Wait and see what happens when we announce stretch goals this week!

7AM start. Let's wrap up these stretch goals and get them to the public.

Brammer also answered other questions via Twitter about Battalion 1944. When asked if the game would run at 60FPS on consoles, he replied that PlayStation 4/Xbox One as well as the UE4 itself have limitation and it may be out of their hands.

@Six7_Tango UE4 and XB1 and PS4 have their limitations that we have no power over. But we'll do our best. It may be out of our hands.

Brammer then confirmed that the team is considering whether to release the game's Early Access version on Xbox One via Game Preview.

@Ozone_Plays We're definitely considering it! We aren't sure yet, but we'd love to and we'll be discussing with Microsoft. Maybe!

Lastly, there will be aim assist on consoles.

@KaWinNee hey! We haven't started working on aim assist for console yet. We will have it, but it will suit a wide range of Console gamers