As perhaps one of the only constants in the gaming industry alongside the heralding of a new schedule of Fall gaming releases with Madden, this year's Call of Duty aims to scale things back a century from the previous tours of war. Sledgehammer Games and Glen Schofield's team have returned to a simpler time, when atrocities and harrowing acts of heroism were committed by soldiers face to face. Taking place in 'The Big One,' players return to boots on the ground with the three core tenets that drive this year's Call of Duty: Campaign, Multiplayer, and Zombies.

Call of Duty WWII’s campaign features all of the grit and realism that Spielberg’s 2001 war drama, Band of Brothers, introduced to sensationalize the war efforts of The Second Front. As a scrappy young Texan named Private “Red” Daniels, this all-American gives players his sight and interpretation of the events from D-Day all the way through overtaking the last bridge standing across the Rhine. The usual bombastic set pieces that Call of Duty campaigns are known for are fully present, offering a little bit of everything from vehicle driving and combat sequences, stealth missions, and surviving against waves of assaulting Germans, my least favorite type of mission to play through on Veteran difficulty.

By franchie standards, the Call of Duty WWII campaign is one of the more gruesome and harrowing depictions of war that Sledgehammer Games has shown before. These soldiers that call each other brothers aren’t superheroes or bullet sponges that can shrug off direct sniper fire and be fine a moment later. War takes its toll on everyone involved and I want to commend the development team for showing the mental strain that these virtual soldiers go through and the PTSD that can strike even on the battlefield. At the same time, as the campaign traipses through the German front, only passing references to the horrors of German occupation and the Holocaust are mentioned throughout the story, in places simply referred to as ‘labor camps’.

The lack of jetpacks and high-tech munitions aren’t the only major changes to Call of Duty WWII’s campaign. Being so grossly outnumbered and outgunned in nearly every encounter, the war effort takes more than a single man to change the tide of battle. Daniels’ squadmates are always at his side and each member specializes in a specific type of consumable that they can share with the player, similar to Elizabeth’s constant ammo resupplies in Bioshock Infinite. These abilities are earned through kills and not by time, so you can’t simply hang back and wait for Zussman to throw you a health pack every time you’re nearly down and out.

Regenerating health is only done away with as part of the campaign and almost feels like an unnecessary change. Most firefights offer more than enough health packs to keep Red at his peak, even on Veteran difficulty if you’re smart about taking advantage of cover and smoke grenades whenever possible. Given how frequent checkpoints pop up during the campaign after hitting a break in the action, it wasn’t uncommon to hit a checkpoint while almost out of health and no ammo left. I didn’t suffer from an unwinnable checkpoint, but I did have to repeat key moments over and over just until I could play the way the game intended and not catch an errant bullet to the face when trying to peek out of cover.

Despite the hundred year gap between Infinite Warfare and WWII, many of the modern changes of a Call of Duty title are brought into the battlefield, often accompanied by a loot box. Even as the weaponry changes back to bolt-action rifles and double-barreled shotguns, those upgrades that players are often accustomed to such as reflex and ACOG sights are available for nearly every weapon in the game. Unique to loot boxes are epic variants of primary and secondary weapons that often give the player additional weapon XP but don’t otherwise offer perks above and beyond the standard model.

Factions are a new concept to Call of Duty WWII and give players some extra tactical choices depending on their ideal role in combat. These five varying classes give unique perks for weapons, but thankfully these classes aren’t limited to using specific armaments. Of the varying classes, I found myself gravitating towards the Airborne for an SMG suppressor or Armored division for an LMG bipod for camping and controlling points in the new War Mode. Playing with a division allows players to level them up and unlock additional perks and benefits, something that weapons and player levels also offer to keep gamers engaged with a carrot-on-a-stick approach with always working towards unlocking something new through repeated gameplay.

Call of Duty WWII features two new aspects to the competitive multiplayer that each draw inspiration from other titles of recent years. War Mode is Sledgehammer Games’ attempt at an objective-focused mode that combines various objectives spread out across different phases of a map. It’s a fun addition to play once in a while, but I find myself sighing anytime I’m stuck on the assaulting side of storming the beaches of Normandy and dying to the combination of machine gun turrets and snipers that barely poke their heads around corners. For the most part, it’s a nice change from the smaller maps that adorn the other multiplayer modes and teamwork is about balancing building base defenses and crowd control rather than just aiming for the highest score.

The other new addition to Call of Duty WWII, Headquarters, is an attempt to create a social space for gamers in the same vein of Destiny 2’s Tower. I can’t say much here, because even after a week after launch, the servers are still not functioning properly and I can’t join a lobby with other players (although I’m told that other players can invite me into their HQ, but that kind of defeats the purpose of the social hangout area). The promises of 1v1 gun fights or watching other players open supply drop loot boxes that rain from the heavens and cheer outcries of ‘EPIC!’ loot feel hollow without anyone else to play along with.

The third, and perhaps most important pillar of this year’s Call of Duty for some players, is the inclusion of a new Zombies mode. This year’s mode features more character customization than I’ve seen in the mode before, with persistent leveling and perks that give players more control over their play style. Even with some great quality-of-life changes, the difficulty is still much more than I can handle and even my best zombies run wasn’t enough to build a complete wonder weapon and see the map through to the end (although I sure as hell came close!). Compared to the stark, serious nature of Call of Duty: WWII’s campaign, Zombies feels like an unusually goofy contrast, especially when running around as David Tennant with a Cockney accent and a latrine trowel.

It’s been great to get back to the simpler action of a Call of Duty title without having to contend with wall-running and giant robots, but that comes at a cost. Between a campaign that features explosions and PTSD, but little else of substance, and a multiplayer component that hits the right marks but promises of social connectivity fall short with an online mode that simply fails to work, there are a few shortcomings that prevent Call of Duty WWII from becoming my favorite in the series. The shooting feels solid, the loot boxes feel rewarding, and there’s always a new challenge waiting for me to step out of my comfort zone and try something new. Perhaps a few months down the line when the first map pack and new content starts rolling in, Call of Duty WWII will arrive fresh from the oven and feel like the definitive World War II game that fans have been waiting for. 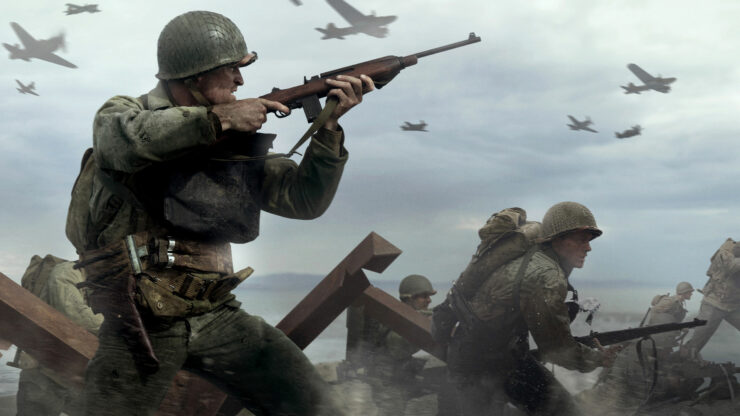