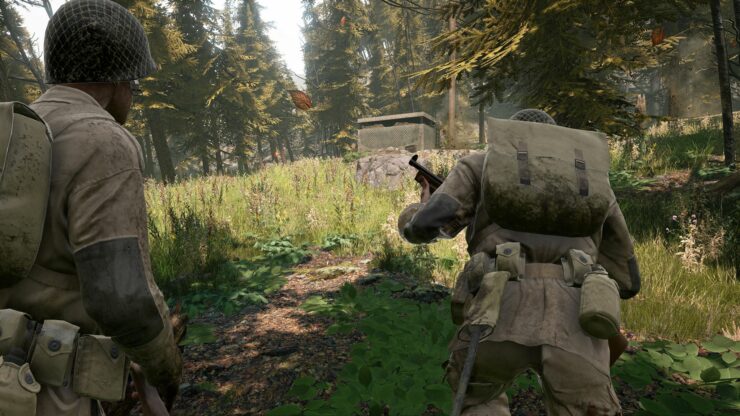 Derby-based studio Bulkhead Interactive are dropping the puzzles and picking up some guns in their latest game. Battalion 1944 brings us back to a time where shooters didn’t need futuristic jetpacks to stand out from the crowd, back when games forced you to reload after using an entire clip.

I had the chance to speak to Howard Philpott, Creative Producer on Battalion 1944. You may know Howard from his work on Bulkhead Interactive’s two previous games, The Turing Test and Pneuma: Breath of Life. Read on to discover how the developers are reacting to Battalion’s popularity, the status of the console versions and more.

Could we get you to introduce yourself to our readers, please?

I am Howard Philpott. I am the Creative Producer on Battalion 1944 which means that I do level design, marketing, production and managing the team. We are here at EGX Rezzed with our first playable build of Battalion.

Battalion 1944 looks like one of the most popular games at Rezzed this year. Are you surprised by the amount of people who have taken an interest in the game?

Yes and no. I mean, we had an inkling because we are super FPS fans ourselves and we knew we wanted a shooter like this. We knew there was a gap in the market for a fast-paced, hit scan shooter that wasn’t Overwatch or Counter-Strike and we wanted to play that game. When it came to the Kickstarter we were like, we might as well put it out there and see what people want because this is the game we want to make.

Our past two games have been first-person puzzlers. We enjoyed making those but we really wanted to make an FPS. We never felt we could do it justice with our budget and team size, so that’s why we went to Kickstarter. When we went to Kickstarter it blew up, we were on Lad Bible and all that sort of stuff. That was crazy for us. It’s really exciting to know that this many people want to play it and the queue here is just representative of that.

The Kickstarter campaign for your game mentioned your love for Medal of Honor/CoD 2 gameplay. You plan on bringing out Battallion 1944 on consoles, how well do you think the game translates on a controller?

Obviously, we are focusing on PC first. We don’t have controllers here right now because we’ve put a year into our movement on PC. It makes sense that we have it like that here.

We are going to be focusing on the console crowd. We’ve got a lot of backers in the community that are console players. The amount of people who have come here today wanting to play with a controller kind of shows the demand for it on console. Our lead designer who is massively into Halo knows all the different setups you can have on controller, I’m a PC player so I know nothing about that. It’s something we are definitely going to be focusing on, it’s not going to be a cut and paste port. We’ve already got our two builds going, we’ve got our PC build and console builds being developed simultaneously. PC is further ahead, but that’s because we are coming to PC first.

Speaking of consoles, do you have any information regarding the PS4 Pro and Xbox Scorpio's potential enhancements? Maybe HDR for those that can utilize it?

I obviously can’t say anything. All I can say is it’s very exciting with some of the results we’ve had.

What's your opinion of the Nintendo Switch?

I personally am a massive fan because I played Mario growing up so I’m fanboying over it right now - it’s outside our booth and I want to play it! As a developer, it’s not something we are looking at right now, purely because it’s just a different market.

With e-Sports growing larger every year, the demand for players to prove themselves also increases. Will competitive multiplayer be a focus in Bulkhead's plans?

Absolutely. Competitive multiplayer is the whole point of Battalion 1944. We are really going to try and push the competitive side of Battalion. Hopefully, we are going to have e-Sports built around it. We are already in talks with ESL and Twitch to try and get some stuff going.

You’ve been developing this for only a year and that’s already happening?

Yeah, they are super keen. We’ve got some guys coming down later. If you know Pansy, she used to be a Call of Duty 4 caster and now she’s a Counter-Strike caster. She is coming to play the game. It’s crazy! We’ve got some really cool features planned for games as well, so it’s not just the top level we are focusing for, we are focusing on anyone that wants to play competitively.

One thing for us in the office is that we want to play with our friends who are of lower rank than us, but we can’t do that in most other games because we are worried about our rank. One thing we are doing with Battalion is having team-based matchmaking where you get to create your own team before you join a queue. Your team will have its own rank and its own stats page, so it won’t affect your individual rank but just your team, together.

There has been a recent resurgence of WW2 games. What do you think has influenced this?

I think it comes around in cycles. It’s the same way with zombies, they’ve come in and now people are getting sick of that. It’s just come back around in the cycle to WW2. Every time it comes around in the cycle, things get improved. While CoD2 is still played to this day, there are features we want in it like matchmaking and advancements in technology that just make it better every time. I think this is the first wave of the cycle coming around. It is exciting to see what is happening in the future.

Are you planning on releasing dates for the alpha, beta and eventually the launch of the game anytime soon?

The only date we’ve got out right now is the Closed Alpha which is the end of May. All the other dates are subject to change. We are hopefully getting Early Access out this year, but of course we’ve not mentioned any dates because we don’t want to disappoint anyone, especially our backers.

Right now Battalion 1944 only has a small number of maps. Are you planning on having more at launch or are you going over quality over quantity?

We are going for quality over quantity, but it also takes a lot of refinement to make these maps. We have one map here are EGX Rezzed and that has seen five revisions over the past six months. It’s crazy how much work it takes. In terms of Alpha, we’ve got three maps for Alpha and hopefully by Early Access we should have five or six. From that point, we’ll just keep adding content.

What does your game do differently to others in the genre right now?

We think it’s all about the niche. We are going more for the old school feel of shooters. Every FPS has small differences. We are going for the Search and Destroy competitive angle. We’ll be heavily focusing on that with a few unique twists that we haven’t announced yet.

Battalion 1944’s Closed Alpha period begins in May on PC. There will be dates for a Closed Beta and eventual release in the future. Right now there have not been any confirmed dates for the PlayStation 4 or Xbox One versions, but we expect to hear more information at a later date. Take a look at our hands-on of Battalion 1944 from EGX Rezzed to see what we thought of the game.