Google has officially unveiled Android TV today after a successful run with Chromecast among a vast array of products including Material Design, Android L, and Android Wear. Similar to Apple TV, Android TV will run on the set-top boxes as previewed at the I/O today. Google TV was earlier launched back in 2010 with a strong ambition of turning your TV into a phone - realism is happening now. 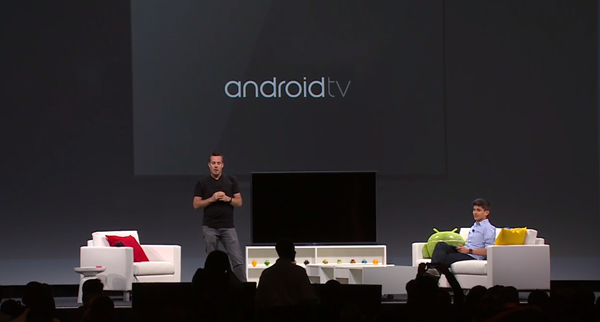 Today's announcement confirms the expectation that Google indeed is rethinking Android TV, earlier launched in 2010 and successfully followed by the Chromecast. Android TV congregates TV content from both the Play Store and partners like Netflix and Hulu. It provides you recommendations based on what you watch and gives you the usual info about cast, related shows, etcetra like its competition.

One of the best thing of Android TV is perhaps Android Wear. While everything else is almost as already done by others, you can control your TV with your Android smartwatch. Isn't it convenient? Another feature setting Android TV apart from the competition is the ability to play games on your television. Devices will come with a controller, like Fire TV, and gamers will enjoy playing multiplayer games online and achieve points using the Google Play Games network.

Google also told at the keynote that it is partnering with OEMs like Sony and Sharp to manufacture televisions with Android TV software coming out-of-box. The ones who have just updated to a new TV or do not want to change their entire television sets for Android TV will be able to get the conventional set-top boxes that will be developed by various companies including ASUS and Razer.

This year's I/O keynote has been all about consistency and unified experience. Google has reinforced that vision with Android TV too. Like smartphones, tablets and other devices, Google won't be manufacturing any devices. It will maintain the software - like it has always done - and will let the third-party OEMs to design and create new devices to carry Google's Android TV OS.

This is one of the few things that will give Mountain View a clear edge over its competitors because the user won't have to buy anything other than the TV itself. For long term too, it will benefit Google as the company would be able to seamlessly help users get content over various devices from varied OEMs using the omnipresent Play Store.